Her voice bespeaks lust. The pose is suggestive. She prefers silk saris topped with sleeveless, low-neck blouses. Most conveniently, she is rich and single - her “colonel” husband long dead and gone. She is Pakistan’s bitchiest queen. She is a “he”.

Every Saturday night millions of Pakistanis switch over to Aaj TV, a privately-owned television channel, to watch the Late Night Show with Begum Nawazish Ali –“the meanest chat show on TV”.

The drag queen lures willing hosts – ranging from Islamic leaders to Indian film stars – into her “living room”, grilling them with queries and razor-sharp comments that render her prey with no choice but to admit that she indeed is the queen.

Saleem by Day, Nawazish by Night

It’s not easy to be catty, especially when you feel like a woman born by mistake into a man’s body. To be 27-year-old Ali Saleem - by day a handsome dude and by night the middle-aged Begum Nawazish Ali - requires far more than a dab of rouge and stuffed bras. In a traditional Muslim country like Pakistan, you need dollops of brazen to flaunt the thought it’s perfectly okay, actually cool, for a man to celebrate himself as a woman. 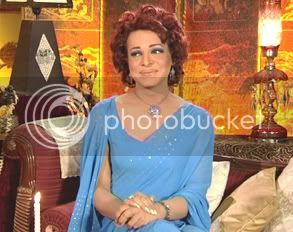 Of course, there were a few family problems with Mom – a former civil servant – and his Dad a retired polo-playing army officer. While growing up, the youngster infuriated Mom by dressing up in her saris or exchanging ladylike gossip with her friends. On many occasions the son tried to explain the familiar woman-in-a-man’s-body logic to Mom, but she could be difficult.

Even so, Mr. Saleem credits her as the strongest influence in his life. It could not have been otherwise - Begum Ali has a lot to thank her mother for learning impeccable lady-like tricks while Ali Saleem, the boy who wanted to be a girl, could not help but hate the same woman for not accepting him as he truly is.

Tracing the Journey to Stardom

Mr. Saleem idolized fellow sisters like Margaret Thatcher and Princess Diana, and soon achieved drawing-room repute by perfectly impersonating Ms Benazir Bhutto – former prime minister and absolute goddess for every South Asian queer hankering to be a queen. The most memorable moment came when Mr. Saleem got the lifetime opportunity to perform his Benazir act for Benazir herself – at her personal request. Pakistan’s first and only female Prime Minister found him so funny that she chuckled aloud and congratulated Mr. Saleem for “making her day”.

His fame gradually spread from upper class salons, and with some prompting from an orthopedic surgeon, Mr. Saleem soon found himself as South Asia’s first cross-dressing television host.

Since then, the happy widow hasn’t stopped winking.

How Pakistan is Reacting

An Islamic society warming up to a transvestite? This has never happened before. A cross-dressing star would have been unthinkable, even suicidal, few years back. But the fascinated nation has responded warmly to the irrepressible queen who describes her role as “an expression of me as a woman.” The widow is “a socialite, very sweet yet bitchy.”

His stardom skyrocketed after Pakistani President Pervez Musharraf liberated the broadcasting media in 2003. The numerous infotainment channels that followed after that exuded fresh air in a straight-laced society. Entertainment-starved viewers lapped up anything and everything – including Begum Nawazish Ali. Although his popularity hints at a certain churning in Pakistan, it would be unwise to read too much into the phenomenon. Only 35 percent of the nation receives cable and satellite television. Outside the cities, satellite reach is barely 27 percent.

Meanwhile the TV hostess has started taking herself a bit too seriously. She interprets her saucy chat show as a medium “to inspire and educate people to do some good in society.” Her mission is nothing less than assisting thousands of seemingly macho man of Pakistan to open their closets and experiment with their feminine selves.

Despite these noble intentions, not everyone is happy. The country’s military leadership is thought to be upset with the attention she commands. There is also an online campaign raging against this madam who many believe symbolizes opposition to the “very values that this society holds dear.” Concerned that “what is vice today may be virtue tomorrow”, petitioners have informed her television channel that “Begum Nawazish Ali must pack ‘its’ bag.”

The lady refuses to be moved. ”It’s very easy for ten people to sit in a drawing room and criticize others,” she says. “We are too jealous of anybody who is even slightly better than ourselves.” Bitchy, bitchy.

Fascinating story, Mayank. It's eye-opening to read about a cross-dresser TV star in an Islamic nation. One doesn't immediate make those kind of associations, but maybe that's because the Western mind cannot always grasps the dynamics of cultures like Pakistan...?

No one should be suprised by this. We have lot of talent artist in our country. This is the other side of Pakistan you never hear in your anti-Islamic obsessed TV/electronic media . Only thing they show is bearded man ready to kill american. Let me just remind you that our people are as normal you folks are. We watch all sort of shows from all over the world in our cable TV. I grew up watching Bonanz and star trek. Thanks for publishing this article.

He/She isn't the "sister" you might think "she" is... not after "she" impregnated a girl and became a bastard-daddy. LOL

It is all an act to get popular. Welcome to the fascinating world of Pakistani TV.

Good article Mayank. And good you're showing this liberal side of Pakistan aswell. For the concerned, I might add that there is an increasing portion of homosexuals atleast in the major cities of Pakistan. And these exist in almost all segments of the society. Some have access to a comparatively liberal and accepting social outlet, where others live in constant denial and criticism.
Let me also say that where there are some who object to homosexuality 'exhibitionism', there are others across the society who take all services and 'sundry' from eunichs.
Perhaps an interview titled 'Life of a Eunich in Pakistan'...??

I have heard much abour Mrs. Nawazish ali but hae not seen coz much busy with job. Good post & very nice blog.
Pakistan Zindabad
Pakistan Paindabad

"She" is prettier than most of the women on Pakistani TV! Pakistan has a quirky side and transvestites have a world of their own. About six years or so there was a very popular dram on Pakistan Television (PTV) on the transvestite community. Of course it was a comedy but it subtle touched on the discrimination, ridicule that is present in every culture including America.
As a little girl I remember seeing transvestites at wedding party's. They would dance and party while the guests would throw watts of cash on them to ward off evil from the new couple.

That being said I think most Pakistanis would cringe at the sight of this article being used to promote the softer image of Pakistan.

joorashraf, Pakistan Paindabad's purpose is to present a truer, and not 'softer' or 'harder', image of the country, with all its varities and identities.