Viewpoint – What Is Wrong In Being A Muslim Fundamentalist? 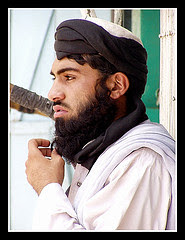 Disagreement with the opinions articulated in an exclusive Pakistan Paindabad interview.

By Syed Kamran Safdar
[The author is a teacher at the University of Engineering and Technology in Taxila, Pakistan. The picture is by him.]

Mr. Ahmed's views on Pakistan, Musharraf and Islam are interesting but I disagree with them. At one place he unfairly compared hijab controversy to Sati, putting dress code and an ancient suicide practice at par! What next? Will ritual slaughter of sacrificial animals come under fire too?

I do not think there was much of an issue regarding hijab and beards in the pre-9/11 world. Now every bearded Muslim living in Europe or USA feels unprotected. In fact, many Pakistani men applying for visas find it judicious to go for a clean shave before appearing for appointments in the American embassy.

I agree with Mr. Ahmed when he says that "hijab was never a problem in the West until the Islamists started using it politically." True, some Muslim groups in Western Europe have used the veil as a needlessly divisive issue but the governments there should have handled it more diplomatically. They should have allowed the women to exercise the freedom of choice. Imposing restrictions surely won't make them secular. The controversy has only put the so-called liberal societies in a poor light. Always projected as educated, modern and secular, the West has in fact ended up looking quite prejudiced.

Mr. Ahmed later went on to praise President Pervez Musharraf for making an "effort to save Pakistan going down the drain into the filth of fundamentalism." I differ from his assessment. Living in a small town in Pakistan, I know the ground realities. The so-called enlightened moderation led by the General is only limited to newspapers. No serious policy has been launched to bring a change in the society. Our President is actually concentrating all his energy in pleasing the western masters.

The truth is that the whole issue of Islamist extremism is a result of unfair treatment of the people in the Middle East and other Muslim countries, by the West, for decades.

Did the West not first colonize us and exploit our resources for its own benefits? Did it not later leave the place hastily leaving the control to bandits masquerading as kings and shahs? Do these western powers now not support dictators in Muslim countries? Were they not the ones who armed the Jehadis first?

I'm a Pakistani, a Muslim man without a beard, and I demand answers.
Posted by Mayank Austen Soofi at 1:14 AM

hey dude you are doing a great job. we need more people like you.

I appreciate the very spirited rejoinder issued by Mr Safdar. All civilized communications deserve to be taken seriously. I will be brief in my reply:

1. Actually hijab and sati are different only in the dramatic way in which sati destroys the worth of a woman once her master is dead while hijab signifies that she is the possession of some other men: in both cases she is treated as an object and not as a thinking, rational, independent individual.

2. It is not true that if the policy makers had not taken some steps to curb this new menace of politicizing the hijab things would have worked out smoothly. On the contrary once a firm stand was taken the whole hijab movement petered out in France. Also it is a fundamental fallacy to believe that those who choose to wear the hijab do it as free individuals. Some do but most are forced or coerced into using it by their families, especially brothers and fathers.

3. It is true that the so-called moderation proclaimed by the government is confined to the cities but I think what we can demand is that it should be pursued more consistently and concertedly. The alternative is the way women are harassessed by the MMA an other rightwing parties.

4. I agree with Mr Safdar that the West or rather the USA created the monster of fundamentalism and now it has bitten the hand which fed it.

5. Indeed religions have fundamental principles or beliefs. Those should be allowed to flourish as along as they do not threaten others. More importantly, religion should be kept away from politics because when combined it creates anti-intellectual, dogmatic and intolerant forms of political behaviour - this applies to all religious fundamentalisms and by no means only Islam.

While I applaud President Pervez Musharraf's intention in bringing enlightened moderation, he is not the right person to carry it out. Although army has always been a ruling institution, it cannot be considered the true representatives of Pakistanis. Such a path-breaking policy needs the leadership of a popularly-elected politician. One-man think tank is too small and limiting for a big country like Pakistan. All the so-called moderation launched by Mr. Musharraf will fall flat once he leaves or is made to leave the power.

"Did the West not first colonize us and exploit our resources for its own benefits?"

No - the West did not colonize us first - the Arabs did! And many of you are still mentally colonized by them today. (Which is why you bow down to the Arab city of Makkah and pay your obeisance five times per day!)

The West gave us the opportunity to break from the shackles of Arab colonization and become modern. For which I shall be eternally grateful. Hopefully the next generation of Iranians will overthrow the mullahs and revert back to Zoroastrian religion or become secular humanists.

professor ishtiaq ahmed is a learned gentleman but it is easy to criticize pakistan and islam while in sweden. if he finds so much problems withour country, he should come back and work for us. why doesnt he teach in a university in pakistan?

I do hope to come back and teach in Pakistan one day but not until such draconian laws as the blasphemy law and other monstrosities have been removed. One can work freely and honestly only in a free society.
Ishtiaq Ahmed

I am pleased you took time to reply to my points.
It’s a healthy debate with open minds between
west and east or west and Islamic world that can
bridge the fast growing gaps we have. I and many
others have learned through your interview and I am
sure many points I raised were source of educating for
others too. All we need is tolerance, between faith,
societies, civilizations, west and orients, west and
Islamic world.

Unfortunately the stronger and dominant media is
western and they have stereotyped Islamic work and
every Muslim. And as an avid internet surfer I come in
contact with so many average westerners who know
little about Pakistan, Islam, Muslims or anything out
of their country. We the orients and people from the
3rd world and developing world are more curious and
read and watch both local and international media.


How to change the mindsets - I believe that change can
not be brought through tanks and over night
implementation of laws. Take for instance the areas
like Swat and northern areas like Gilgit, Hunza and
Kailash etc. Hunza etc were cut off from the modern
world before the opening up of Karakoram highway. Now
the road, the interaction with the rest of the world
in the shape of trade, education and tourism have
developed the people into educated, mannered and
sophisticated population. Similarly Swat where once
even teenage kids were proudly showing off their
Kalashnikovs is today a pashotoon area where I was
able wander alone in the remote vallies without a
single men in sight with a gun. Why? Because there are
roads, hospitals, schools, IT education, Cable TVs,
internet café and a future and hope for better future
for the youth on that area. Similarly opening up roads
and development to the northern tribal areas that seem
to be the source of trouble in Pakistan could have
lead to changes. The bombardment of Madrassa by USA
and Pakistan govt is only resulting in a reaction in
the shape of suicide attacks in the rest of Pakistan
as we have seen recently during Moharram. Why west
should complain fanatic Muslims are targeting christen
world? As there are more incidence of suicide bombs
and terrorist attacks on Muslims in Muslim countries?

On Hijab – unfortunately making it illegal with
the laws mean those women who would like to keep hijab
on their own free will can not do so? Kind of silly?
It is just like if I a law is made in Pakistan that
says I must keep a beard.

As for Musharaf’s govt policy in your own words
“so-called moderation” is only limited to
westernization of the culture rather then bringing
serious changes to the attitudes of the people.
Islamaization of our cricket team did not happen in a
small sleepy town. That kind of “work” is
going on in universities and other places in the
modern cities, not just the Madrassas in the far flung
mountain areas.

On women rights – All I can say that in the past
victim of rape were personally approached by MS Bhotto
and Mr Sharif, women who suffered sever domestic
violence were sent to hospitals in the USA by govt for
treatment and cosmetic surgery. I can not remember
the example like those of Dr Shazia and Mukhtar Mai,
both were so personally harassed by General Sb. So
lets hope now these two ladies will get justice. Will
they? Again MMA and right winged parties are a monster
created to keep the Master wanting of Musharaf to stay
in power. When did ever the Islamic parties ever had
enough vote bank in the past?

Sir, I'm always confused when someone says the "wesr" exploited your resources . Tell me, were you going to drink the oil instead of selling it? If not why not use the proceeds to bring your people out of poverty or lower your illiteracy rate from 80%. That in my opinion is shamefull. Now you say the west is "stealing" Iraq's oil; if so it's a very expensive theft in both dollars and lives. For myself I would much rather have just paid Sadam for the damn oil, to get it at a fraction of the price and let you all rot in your primitive tribalism. The world would be a much better place if mahomid had never been borne. That way we in the west wouldn't have to worry about eventually vaporizing an entire civilization to achieve piece.
A. Renner, California