Dating in Pakistan - “There Are No Discos in Lahore” 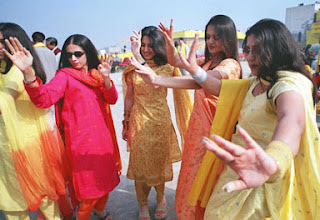 A young man discusses the “scene in colleges” and in other “intimate hideouts” in Pakistan’s cultural capital.

Tehman, it is Question Time Pakistan. You have dated girls. Confess.

No, but I really need to and should!

Liar! I saw you in Shalimar Gardens. You were holding hands with a woman.

Take a break, Mayank. You are seeing things. But yes, Shalimar Gardens is the place. It is a good haunt for middle-class doves. Hey, add Lawrence Gardens, Race-Course Park and Model Town Park too in the list.

There are no discos in Lahore. But right mood, food and style are important to the moneyed love-birds. Cafes and restaurants at Gulberg and Defense are wildly popular. But do you know the most happening and intimate hideout?

The lush-green Jallo Park near Wagah at India-Pakistan border remains a favorite - for all classes. It is situated slightly away from the Lahore city, a good thing since it keeps you away from the prying eyes of uncles and aunties.

Then there is always your car! Couples like isolated, dimly-lit parking lots and streets in Defense, Gulberg, and Model Town etc . Sadly, Lahore Police is always on a sniff out.

Apparently, prostitution is making inroads in these areas as well, with similar techniques and methods, if you please!

Oh, I thought Heera Mandi was the place for that...Hey Tehman, do you tell your Mom and Dad before going to meet your girl?

Let's not talk of my folks, buddy. But I think most parents are no longer naive about these issues. Nowadays they try too hard to limit their children's social exposure, especially towards the opposite sex. I guess parents do get that "sinking feeling" when their kids start spending too much time on cell-phones, friends, and on Internet chat sites.

If they could be a little less smart...Now, don’t think I’m referring to you but do your close friends hold hands in malls and parks - making a nice show for the rest of the people?

Yes, thanks. Tehman, you are a boy, she is a girl. You look at her. You wanna talk to her. So will you go and say hello to her?

Huff, not that easy, dude! You have to understand there is a diverse mix of young adults in Pakistani society, ranging from ultra-conservatives to the ultra-modernized. Mostly, boys and girls keep their distance. It is not like you could just walk up to the girl and start singing to her.

However, I've heard of instances, generally in the Defense Housing Society, of complete strangers getting to know each other in music stores. Isn't that interesting?

Very fascinating. How is the scene in colleges?

Things are relaxed in numbered colleges and universities, which are mostly private and cater to the largely affluent students.

The government colleges have a very conservative culture but boys and girls interact even there. Given the uncalled interference of the extremist Islamic student bodies there, the mel-milaap is on a very basic level. However, forget about the dating. It is difficult to be friendly with girls when such "watchdogs" are around.

In universities, though, both boys and girls obviously have to learn to interact with each other. From my personal experience I can say it is tough. Worse, in my university, we have segregated post-graduate classes for men and women. Damn!

Tehman, do you feel dating is a result of over-exposure to Hollywood flicks?

Not at all. But unfortunately it is believed to be by many, especially in Pakistani society. I believe we are social and sexual beings, and interaction between the sexes is extremely important for our growth as individuals, as a society and for a mobilized youth.

But don’t trends like dating and pre-marital sex run counter to our culture?

Perhaps it does. That is why most of the middle-class households, apart from conservatives of course, remain against it. They believe it is an amreekan concept and that the young are being morally corrupted by such liberation.

So watching Friends and Desperate Housewives is not good for us after all?

Mayank, I'm not sure if that really matters. I've spent time with both the ultra-old-fashioned and the ultra-modern young boys and girls, and I fear I spotted no "traditional values" in either of them.

But then I have also met youngsters who are quite traditional, aware of their roots, culture, beliefs and yet have no qualms in interacting with the opposite sex in a mature and healthy manner. Some of them are fully aware of the western lifestyle but still do not seem to be influenced by the cable culture.

Wonder what you mean by "mature and healthy manner". Now Tehman, don't make a face please. I was only joking. Thanks for chatting to Pakistan Paindabad.

Be good and get a life, Mayank!
Posted by Mayank Austen Soofi at 4:13 PM

This website had some standards. I'm surprised by the casual tone. It could have been a better interview.

bHai, you are missing out on mcdonals. heee

"I've heard of instances, generally in the Defense Housing Society, of complete strangers getting to know each other in music stores." How cool.

Good grief - even in the ultra conservative Saudi Arabia one can meet girls by exchanging chitties with cellphone numbers and arranging meetings at shopping malls!

Of course the girls wear a full burqa and so are able to keep their identity secret ...