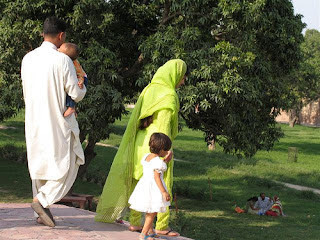 By Usman. His blog is bent upon debunking the myths foreigners carelessly associate with Pakistan.

If you wish to go further, get married.

A simple thing such as dating acquires complexity in Pakistan. Take your pick – pious Muslims, conservatives, middle class society, and people of the rural regions. They all look down upon the free mingling of opposite sexes. Unfortunately, together they constitute the majority.

Now, unfold Pakistan's map and fix your eyes towards the western part of the country. You will find the states of North West Frontier Province and Baluchistan. With their tribes and coded customs, these provinces are decidedly more conservative. But look east and Lahore is easy. Go south and Karachi is liberated.

Even then, no matter how liberal Clifton residents of Karachi are, there is always a difference between a dating man and a dating woman. A man could be a good friend of a "liberal" woman but most likely he would not consider her to be "wife-worthy". You see even "liberalism" has its limits.

Yet, dating, or even premarital sex, is quite common among the urban poor in katchi abaadis. The rich of the so-called "high society" are also quite relaxed in their life style choices. Middle class, alas, is stuck in the middle.

But the boundaries between middle and upper classes get blurred in certain spaces, like in colleges and universities. The dating and the courtship there might still be "innocent" and "pure" but not rare. For instance, in medical schools, boys and girls often pair off into "couples" as soon as they grow few months old in the campus. Some of these couplings last long. In few cases, following years of studying together, and ending up being doctors, the boy's family finally shows up at the girl's home for "chai". This leads to engagement ceremony and marriage – hopefully they all live happily ever after.

This arrangement is neat, cute and socially acceptable but I doubt if Islam permits mixing of men and women for the purpose of romance. Helpfully, our religion, contrary to the general impression, is open to interpretations. My own is that though you could talk to a woman, you must always be respectful, courteous and alert to her dignity. If you wish to go further, take your parents to meet the girl's. Get married. That is the correct way.

But correct way or not, many have problems with the growing liberalism. This version of "enlightened moderation" is gradually becoming more visible, at least in urban areas like my city Karachi. But it would not do to credit (or blame; your choice!) the phenomenon to West alone. We must not ignore the power and influence of Bollywood. Hindi films from next-door India are very popular here. These song-and-dance spectacles of love, dating, and longing leaves a deep impression on youngsters. (After all, it is tempting to watch the hero circling the trees with his girl!)

On second thoughts, can we really give that much importance to outside forces? Isn't attraction between the opposite sexes simply the very essence of human nature? Isn’t it normal?

In the end: Though the percentage of women "modernizing" in Pakistan, as far as within the limited orbit of dating is concerned, is increasing, the society remains conservative for some 50 million frustrated male teenagers.

This is bad news. Of course, that’s my interpretation.
Posted by Mayank Austen Soofi at 5:04 PM

Pakistani society is a hippocrat. The man can do many things but women can't. If they are as bindaas as their male counterparts, they are taken as prostitutes. same on us.

It is a good piece but I want to ask the author why he is double minded. At one place he say that it is better to get married. While in the end he writes that he is a sexually frustrated man.

Anonymous, The article is meant to be light-hearted. A spectrum of public opinion is provided for the reader's consumption.

To clarify my point, while getting married through the proper channels is the "correct" way for pakistani traditionalists, It can be a confusing, frustrating world for thousands of young men on Tariq Road...

I am neither a tradtionalist nor a hormone-induced teenager (thank god for that)... simply expressing some popular opinions in pakistan..

I have news for you - most societies are hypocritical, including US, UK, India and Saudi Arabia.

Whilst most parents tolerate their sons sowing their wild oats, the same freedom is seldom extended to their daughters!

It is a good piece but I want to ask the author why he is double minded.