Dating Scene in Pakistan – "I Prefer the Oriental Ishq" 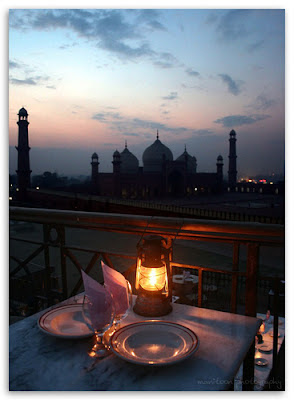 Where do young people meet in Lahore? And how things eased following Musharraf’s takeover?

Raza Rumi is a native of Lahore. He maintains the blog Jahane Rumi and writes on literature, history and society for The Friday Times – Pakistan’s popular weekly magazine. The interview was conducted in a series of e-mail exchanges.

Mr. Rumi, welcome to Pakistan Paindabad. You grew up in Lahore during the 90s. Have you ever dated?

Well, my dear, not in the Western sense. In our generation, and the preceding ones, it was a hushed up affair. We did not have that culture of inviting girls to dinner or dance (perhaps not even now). People would meet discreetly, away from the populated places, and find little corners in the parks and monuments. It still happens that way.

As for me, I was more of the Urdu-Persian variety of Ashiq mizaj, and not a part of this dating paradigm. Call it passé, but I prefer the oriental Ishq - where you can yearn for someone and internalize their presence in you, rather than the commercial product known as dating.

Coming back to your question, Lahore is a conservative society. But times are changing and the recent (last 5-10 years) urbanization and "modernization" of the city has changed the so-called dating patterns as well.

How has it changed? Please explain.

The last decade has witnessed a surge of globalization. The penetration of electronic media and the internet has accompanied urbanization and awareness. Consequently, the old value structures are crumbling and the younger generation wants to be part of the global cultural patterns that are sold as pre-requisite to 'freedom', individualism and rise of the self.

Also, consider this: the break up of joint family system in urban areas implies that nuclear families have increased in number. Kids are no longer constrained by restraints urged by grandparents, uncles, aunts and cousins. There is an increase in 'personal' space. I am not saying if it is for good or bad but these are the signs of our age.

Mr. Rumi, is there a healthy interaction between the opposite sexes in colleges?

It used to be very tense and difficult. It is improving now. There are generally separate educational facilities, though the higher education is mixed. Interaction is easier among cousins and other relatives. This is why weddings are a grand setting for hearts to flutter and romances to bloom.

How approachable are girls?

I am not sure what you mean, Mayank. In general they are approachable, but I fear not-so approachable for 'dating' purposes. However, internet is simplifying the matters.

Do you have any idea about the most common dating places in Lahore?

I have noticed that for the upper middle classes, the major restaurants in Lahore, particularly those situated on M.M. Alam Road are perfect venues. Now with the rise of consumer culture, there are more restaurants in every locality. Besides, there are parks, monuments, even houses for the lucky ones!

The internet of course has provided an alternative space for young boys and girls to interact and even get together. Online relationships are perhaps most common.

You mean it is not that tough for lovers to spend some quiet hours together?

If you have noticed, you’ll realize that our Urdu poetries, film songs and even classical music have allusions to the difficulty in meeting of lovers and how they are always hindered by the zaalim samaaj. In fact the most exciting part of dating in Pakistan is this "struggle", secrecy, mystery that surrounds the whole exercise. The concept of "invisible love" therefore becomes more exciting and entertaining for the individuals concerned.

Do parents know when their children go for dates?

Most often, parents remain in dark. It actually depends on the socio-economic strata: there is a tiny slice of liberal/Westernized class where dating is normal and acceptable. However for the middle class, dating remains a clandestine activity. Thankfully, the lower classes are free of such notions.

We also need to draw a distinction here. Parents are far more relaxed if it is sons who are dating and not daughters. They can be tolerant of the boys. Due to social reasons and fear for "reputation", girls are expected to remain Nek Parveens and shareef virgins. They have to be “nice enough” to be chosen by a good suitor and his larger-than-life mother.

Of course, this is changing with the entry of more and more women in the workplace. The new generation is more forceful in asserting its right to choose life partners etc.

Is it difficult to display affection in public?

It is but was much worse in the past. Things have somewhat opened up since General Musharraf's takeover in 1999. For instance, in places like Lawrence Gardens and Race Course Park you are likely to find couples sitting quite intimately, sometimes even lying down on the grass. These are spaces where the public display of affection is more visible.

Mr. Rumi, do you feel dating is a western concept?

Yes, I have problems with this whole expression "dating" and what it implies. The concept has a western genesis that is promoted and sustained by the popular media. It is now getting more and more embedded due to globalization. When I was young, Valentine's Day was hardly known. Now not only the Valentine's Day but the Mother's Day, Father's Day and other blahs blahs are sold on the consumer shelves for quick emotional gratification.

Depends on which "Islam" are we talking about. The orthodox view, preached in Pakistan, thanks to the clergy, is that na-mahram (unrelated) men cannot be with women. But this is only one of the several interpretations in Islam. According to more enlightened interpretations, platonic interaction (don't know about dating per se) and meeting is not un-Islamic. After all, men and women have to meet in colleges, at the workplace and on social occasions.

Take the case of Iran - there is high level of women's participation in public life. Also look at Indonesia, Malaysia and Egypt. These are strict Islamic societies but women are not constrained. In my personal view, dating - if it means an interaction where modesty and limits are observed - is not against Islam. Contrary to the media generated reality, Islam is actually a tolerant faith preaching moderation, a middle path and certain limits for the collective good.

Could such trends adversely affect the traditional values of our society?

I am not sure. Interaction between men and women (or same sex encounters) have taken place since time immemorial. I suppose more important things for the youth are awareness on HIV, AIDS, STDs etc.

Traditional values are being challenged. There is a struggle between Islamists and what one would call the moderates (I am not comfortable with this term but can't think of another one) taking place in Pakistan. You have a free media here with pop music and radio talk shows blaring out flirtatious conversations and sighs. On the other hand, you also have the Islamic parties in the parliament and the provinces. These are interesting times for Pakistan and I am an optimistic. The good from the tradition will survive and all the crap will end up in the dustbin of history.

Mr. Rumi, thanks for talking to Pakistan Paindabad.

You are welcome, Mayank. It is great to come across thinking individuals such as you who have the ability to rise above the mainstream prejudice and officially constructed histories and realities. Keep it up.
Posted by Mayank Austen Soofi at 5:19 PM

This was a great interview. I agree with the interviewee. Thanks for bringing out the modern aspects of Pakistan.

Paksitan is a liberal country. But our mullahs are trying to pull us back. Mr Rumi is right. These are interesting times.

"The good from the tradition will survive and all the crap will end up in the dustbin of history."

what an excellent statement!

I absolutely agree with Joora

I thought Rumi had some interesting answers to some banal questions. This was a tricky subject in itself i.e dating in an Islamic country.I do wish however that the interviewer could have asked some more romantically inclined and interesting questions!Question about love - which does not require to be Islamic or otherwise.Do we ever ask anyone does dating falls within the structures of orthodox christianity or Budhist teachings and social setup.why is there such an eagerness on the world's part to term things Islamic or unIslamic all the time?Since we have to constantly do this,we end up bracketing things either here or there and eventually start believing them to be as such.
THe preference for "Oriental Ishq". was amusing - requires some elaboration though

what ishq-vishq. It is all about sex.

I absolutely agree with Joora!!