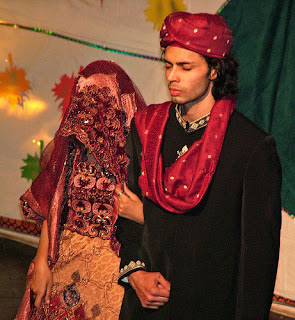 [Usman Ahmed is a software entrepreneur in Lahore]

Welcome Usman. You are not new here. You are an extraordinary photographer and have published several photo essays in Pakistan Paindabad. Tell me, have you ever dated?

Yes, I love this website! No, I haven’t really dated. I have studied in co-ed colleges where I had female friends. We used to go out sometimes but you can't call it dating.

So you do have gone out with "female friends" but won’t call it a dating. I see…Tell me tips on dating in Lahore?

I will say it is good to have a car. You may go to parks or eat in fancy restaurants but nothing is more convenient than a car with black mirrors. Since no one can see inside, it is the most secure way to date. You can drive all around the city this way with your girl friend. In fact, one can see such cars all the time.

What is your idea of a perfect date?

For me it would be to go to some fun place, maybe play golf together or chill out in a bowling alley.

What exactly happens in dating?

Ha ha .. I don't know what exactly happens, Mayank. But you know most of the so-called dating still goes on phone. But when two love birds miss each other so much or want to discuss their future, they decide to meet. No matter what happens.

No I don't think so. But sometimes I have heard about it. Again, I'm not so sure.

If you don't have a car with tinted glasses, is it difficult to get cozy?

It is impossible, man. You have to make sure no one is around or people will definitely harass you. At least this is how it used to be. But things are gradually changing. However, there was a time in Pakistan when even going out with a female cousin set people talking. But now there is more tolerance. People do not bother much.

What role does Islam play in the life of youngsters like you?

You see Islam doesn't permit man and women to meet each other alone before marriage. Though in arranged marriages, Islam gives full right to both boys and girls to make their own decisions. The only condition is that the prospective partner must be evaluated in the presence of guardians. If you like someone from your work or college, you can ask your family or friend to propose to him/her and his/her family.

Mayank, Islam says that when an unmarried man and woman are alone in a private place, the invisible third is always Shaitan. Bad things are to result from such liaisons.

Do you feel dating is a western impact?

It sure is. Dating started in the 90's. True, some people dated even before that but they belonged only to the super-elite section of our society. It was after the arrival of cable TV that dating climbed new heights.

For instance, nobody had heard of Valentine's Day ten years before but now it is almost a festival. It has grown so huge that it is celebrated in schools and colleges. Special parties are held. One courier company even started a special gift sending service for the occasion. Markets sell heart-shaped pastries and cards.

Last year that day I met an illiterate balloon seller selling his stuff at triple the usual price. I asked him why and he said it was Valentine's Day!

If it is a western influence, as you say, then how does it affect the bonds between the young people and their parents?

It is a pretty difficult thing for our elders to accept. You must understand they have lived their lives with a completely different concept and therefore sometimes there are serious clashes between the young generation and parents.

Some couples chose to run away because parents refused to accept their choice of companions. Sometime they receive death threats forcing them to end the relationship. However, parents who are liberal enough to let their children select their own soul-mates are in peace. Sometimes there are “arranged” love marriages where both families are open and acceptable. But there could be problems afterwards.

Still it is universally believed in Pakistan that arranged marriages, where families play the most important role, are more secure.

Usman, Thanks for sharing your views with Pakistan Paindabad.

You are welcome, Mayank.
Posted by Mayank Austen Soofi at 7:47 AM

"... but nothing is more convenient than a car with black mirrors. Since no one can see inside, it is the most secure way to date. You can drive all around the city this way with your girl friend. In fact, one can see such cars all the time."

The automobile was blamed correctly for the rise in sexual promiscuity in the US too!

Why do you think college kids invest in vans...

Some couples chose to run away because parents refused to accept their choice of companions.