How To Survive The Taunts And Jibes Of Pakistani Columnists 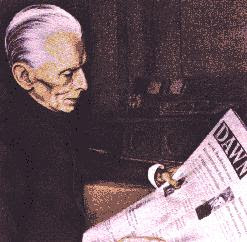 Pakistani newspaper commentators routinely complain, bemoan, and wail about the wretched state of affairs. So depressing are their opinions and forecasts that it is a surprise to come across no reports of readers dying of sudden heart attacks in the midst of browsing the morning headlines.

Perhaps these hard-hitting columns are more bearable when read as satire. It is likely this was also envisaged by the respected columnists – their (accidental) wit serving as tools for the people to cope with the stress of living in such unbalanced times.

After all, having a sense of humor and an ability to laugh at oneself is a key to balanced living. So do not feel guilty if you burst out chuckling while reading this minor compilation of some classic feel-bad lines, often taken out of context from otherwise thoughtful columns.

Moreover, take comfort from the fact that our Pakistan is a strong nation and will outlive its dictators as well as its doomsayers. Pakistan Paindabad – Long live Pakistan.

Face It
Is it not a fact that we Pakistanis are misogynists and wife-beaters of the first degree?
Kamran Shafi in Daily Times

Fun 'N' Frolic in Allah's Own land
There are times when the antics of our rulers assume surreal proportions. Consider this recent headline as an example: “Prime Minister directs tourism ministry to attract one million foreign tourists to Pakistan this year.”
Irfan Husain in The Dawn

Self-Introspection
Are we a nation of sinners? Of course we are.
Ayaz Amir in The Dawn

How To Get Bald
Every time I read or hear that Osama Bin Laden is in a super-secret safe-house — a friend tells me there are 28 of them in Islamabad alone — I pull out a few more of my hair.
Khalid Hasan in Daily Times

How To Stop Worrying
I am writing this on (the festival of) Muharram 10 and praying that it will be a peaceful day.
Najmuddin A. Shaikh in The Dawn

Animal Farm
1965. 1999. Thirty-four years. No change of thinking. We are consistent and dogged. That’s a quality generally found among the asinine population.
Ejaz Haider in Daily Times

Second Thoughts
We shouldn’t belittle ourselves...
Ayaz Amir in The Dawn

Generally in the US it's the President who issues stupid statements; at least in Pakistan it's just the press.

As a Pakistani hack quoted by Mayank, let me the first to say he's spot on. We do have a tendency to flagellate ourselves at least twice a day.
Irfan Husain

Hi,
I am regular reader of The Dawn newpaper thru net and I found its feature writers too critical to themselves specially Mr. Ayaz Amir. in fact once I wrote a mail to him telling him that when i was growing up in India in 70's we too had a whole lot of Indian writing in English who used to be so negative and self critical as a result we gre up to be so cynical about ourselves but now i realise that such continues self criticing writings serves no good to the society at large. we all need a mirror once in a while to show our warts but too often viewing such mirror may not be too healthy.
we as nations need not to bloat in the glory of distant past but self critical writings just do the opposite so a healthy balance is required.
On a personal note, i would be really delighted to see a self assured, mature pakistan florishing as our neighbour
Prashant