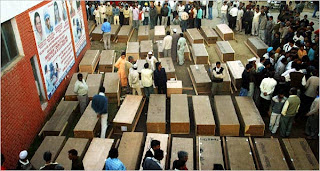 It took a bomb attack to expose the travails of the traveling citizens.

Around 68 people, mostly Pakistanis, died in a bomb blast at Samjhuata Express while it was running at 90 kilometers per hour at the midnight of February 19. The non-stop train was on its way from the Indian capital Delhi to the border post at Attari. There the passengers were to board a second train, which would have taken them to Lahore. The cross-border rail service is considered as one of the few symbols of progress in the peace talks between the two nations.

The dead included 26 men, 14 women, and 13 children. 15 bodies were charred beyond physical recognition. Victims ranged from places as varied as Multan and Karachi. A shopkeeper from Faisalabad lost five children.

Both the nations have made the right noises. Indian Prime Minister Manmohan Singh declared his country's ''abhorrence for this heinous terrorist act." While Pakistani Foreign Minister Khursheed Kasuri called the bombing a ''terrible act of terrorism'' and said ''the peace process must go on with greater vigor and greater determination.''

The two bogies that caught fire after the blasts were unreserved and over-crowded with poor people. Since it is a tendency in both the nations to keep the poor at a distance, the compartments were not linked to the rest of the inter-connected train. On hindsight, many lives could have been saved if this were not so. Besides, the Indian security measures included locking this special train from outside. (The trains are usually locked from inside) No one could get in or get out. The burning passengers had no escape.

Shaken by the tragedy, India has responded with responsibility. The country's High Commission opened a special visa camp at Lahore's Grand Hotel to facilitate immediate travel by relatives of those killed or injured in the blast.

This is surprising. What if "Pakistani Jehadis" get a few of these quickie visas to bomb the great boom-towns of Bombay and Bangalore? If the travel formalities are suspended on an emotional impulse, won't India stand vulnerable to the "evil" designs of the ISI?

However, the stark human face of the tragedy appears to have moved New Delhi to make security compromises. “Incidents like these that are very heart-rending, and which affect both countries and both peoples, can only add to the urgency of the need for cooperation," Mr.Kasuri observed.

Can this temporary relaxation, occasioned by the tragedy, be made permanent please?

No one denies that Pakistan has terrorists within its borders but is a strict visa regime a solution? Further, is it wise to seal Pakistan-bound trains from outside, as if all the passengers are Al-Qaeda operatives? Such measures create insurmountable, sometimes fatal, difficulties for the travelers. It is regrettable that a deadly bomb attack had to expose their travails.

Pakistan Paindabad mourns the dead and demands more respect for the traveling citizens.

Are you Indian or Pakistani? If Indian how come jinnah is your hero?

From Samjhauta was not locked from outside: India

New Delhi: Indian Railways on Tuesday denied Pakistan's allegation that the doors of the two compartments ripped apart by blasts that killed at least 68 people were locked from outside.


Northern Railway's chief PRO Rajiv Saxena said the passengers on the Old Delhi-Attari train that links up with the Samjhauta Express to Lahore travelled like any other train.


Pakistan's Railway Minister Sheikh Rashid had alleged Monday after the blasts near Haryana's Panipat town that the doors were locked from outside, preventing people from escaping - 553 of the 757 passengers on the train were Pakistanis, he said.


The minister was reported as saying that people died or were critically injured because they were in a "locked up cage".


"It is absolutely wrong and incorrect to say that the two bogies were locked from outside," Saxena told IANS.


He added that Indians and Pakistanis travelling from Delhi to Lahore by train are subjected to customs and immigration formalities only at Attari station.


The only difference between this and any other train, he said, was said that the Old Delhi-Attari train stops at Ambala for "crew change". After that it goes directly to Attari, near Amritsar, the last station on this side of the border.


After passengers complete customs and immigration formalities, they board the Samjhauta Express, which stops at the border checkpoint of Wagah. It moves on to Lahore after Pakistanis complete their formalities.

From Death toll rises to 68 in train tragedy, 49 identified

ISLAMABAD, Feb 20 (APP) The death toll in the Samjhota Express tragedy rose to 68 on Tuesday, of which 49 have been identified, Minister of State for Foreign Affairs Khusro Bikhtiar said. Those identified included 22 Pakistani nationals and 27 Indian nationals, the minister informed the National Assembly here, adding that the Indian authorities also detained one person on charges of being involvement in the incident. (First Posted @ 11:15 PST Updated @ 15:35 PST)

So, based on this proof, is the indian government handing over the hindu terrorists Sadhvi Pragya and Major Purohit of the Indian Armed forces to the Pakistani Judiciary for terrorist activities and killing pakistanis.

This double standard of the indian government looses its credibility within india and outside as well. I seriously doubt the intentions of the indian government. They are interested in ethinically cleansing muslims and christians in india and establish a hindu state with the help of rss, vhp and other organizations. Most of these fundings are coming from uk, europe and us countries.

19/2 calls for justice from so many families. Today, it is proved that terrorists does not just strike from Pakistan, they do from India as well.

Indians need to recognize, and tackle this situation.