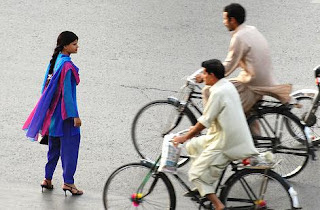 A Lahore girl, living in US, returns home to find a changing society.

Coming from an all-girls Convent school, it was taboo to talk about boyfriends. Not to say that people weren’t going out, just that no one ever spoke about it. We believed that guys never married girls they went out with, and we were training to become good wives, not girlfriends.

But times were changing. My juniors seemed more confident, and their juniors even more forthcoming about romantic relationships. Unlike most of my friends, I went from Convent to a co-educational college. Things were more relaxed there. There was less sexual tension. Somehow it seemed a more natural and normal environment.
Boys and girls could be friends or lovers, both roles being for the most part quite acceptable.

Then I decided to come to the United States for higher education. I was to live in Boston, a city in the most liberal part of the country. Thanks to the globalization of MTV and McDonalds, I did not really experience culture shock. There was however an identity crisis. What does it mean to be a Pakistani, a South Asian, and a Muslim in American society? Initially, I felt like I had to defy all things American to be Pakistani. I had to preserve my cultural values in their purest form. It was all about holding on to the roots and showing cultural pride.

I must not smoke, drink, eat haram food or think about boys. Must not become like those American girls who flirt openly and talk loudly about their sexual experiences. I decided that best way would be to adorn the traditional attire and be reserved. I couldn’t let them corrupt me.

When I went home in the summer after freshman year, I found that I was too conservative for my Pakistani counterparts who embraced modern culture. While I walked around with a paranda in my long braid and a dupatta on my head out of respect for the local culture, the locals were bold in their fashion statements. The shirts were tighter, the shalwars shorter, the jeans lower and the cargos baggier than I remembered. I felt outlandish. That was culture shock.

Next year I witnessed more changes. More cafés and chic restaurants had sprung up all over the place. Smoking "shisha" and going to dance parties was as cool as speaking English with an American accent. After two years of living in the U.S. my accent did not compare to that of Lahoris working in call centers.

A friend from Karachi, whom I had met in Boston, came to visit. We went to the hip Café Life for dessert and witnessed what we never imagined we would see in Pakistan - lots of intimate couples romancing openly. Why was this so shocking?

While "dating" sounds like a western concept, the idea is in fact not. It is a human concept. People are attracted to each other and look for ways to express their emotions. If it is not suppressed, I think it is a pretty universal phenomenon. Of course, people in different cultures at different times have different beliefs regarding the practice of courtship.

The college experience in America has transformed me in many ways. I can connect better with rebellious lovers and have come to resent their over-protective parents and family members. I have come to value freedom and independence.

As far as the question of traditional values is concerned, we must ask ourselves what part of orthodox society is worth preserving and what is not. Certain traditions must be challenged. Silence is not a virtue. Suppressing and discouraging natural processes can lead to frustration, aggression and dissatisfaction with life. Society will benefit from individuals being aware, open, and accepting of their sexuality. It will lead to a more educated, responsible, and enlightened world.

[This viewpoint completes the Dating in Pakistan Series. A Valentine's Day Special Photo Essay by acclaimed photographer Usman Ahmed will draw the curtains.]
Posted by Mayank Austen Soofi at 10:15 PM

Good use of the photo, Mayank, as I'd noted under the photo, 'the times they are a changing'.

It is such a lovely viewpoint. I'm a Pakistani man living in Melbourne and I can relate to Maryam Arif's place. I wish we had more people like her. Than you so much.

"Certain traditions must be challenged. Silence is not a virtue. Suppressing and discouraging natural processes can lead to frustration, aggression and dissatisfaction with life."

I cannot agree more. Thank for so wonderfulpiece.

Maryam, i really liked your piece. I live in India and the story here isn't very different. Sometimes prejudices exist in the garb of 'moral policing' and the people who usually cry about 'indian culture' being compromised are the most ignorant about true Indian traditions. I guess one always has to try and find a fine balance between culture, tradition, modernity and personal freedom.

Thank you all very much for your encouraging comments

This is Pakistan's new generation culture of sorts! Maryam's right, things are changing very rapidly every year. And so are the disparities and mindsets between the young in the various social setups. You'll find the young to be largely confused, directionless and quite discretionary. A sense of humility, fellowsip and identity seems to be withering away.
But indeed an expressive personal potrayal by Maryam. You write wicked!

Nice piece Maryam. Change is perhaps the only thing that is constant. I agree we need to strike a balance between tradition and modernity...give equal respect and importance to roots and wings. That perhaps will help us appreciate all cutures, including our own.

I am a pakistani who recently came to the states too and I can totally understand where you come from.
I agree with your point that certain trsditions must be challenged- but my question is what criteria do you use to justify what is wrong or right? Amercian culture? Certainly, it seems resoanble to say it is natural for people from the opposite sex to be friends or in love- but how they express this love is not clear and "natural"- I can certianly say that it is also natural for people to maitain privacy and shame - and it is this definition which is controversial.
Love , make friends but in a "natrural" way NOT indecent ways- and if you beleive in anything known as vision( or identity for that sake) then- as a paistani muslim you might want to get some inspiration of what is "naturally" moral from Islam, to make the institution of friendship and love truly "natural".

Farhan, I appreciate your comments.There is no one "natural" or right way, I agree. It is equally valid and correct to "maintain privacy and shame" as you said, as it is to be bold. It is the freedom of choice that I value. The option of being one way or the other without any pressure, threat of persecution or social stigma, regardless of where one's inspiration comes from.

Maryam, You have spoken for me as well.

I believe its important to recognise and respect a society's culture and norms. What is 'culturally' right for the americans may be horrifically wrong for pakistanis, and with the same token what's right and acceptable for pakistanis may aswell be unthinkable for americans or europeans; and examples of which we may have a handfull!
An individual's roots-(cultural, religious or family), are what defines him or her in various cultures. Cut those roots and you'll have what they call a wayward son/daughter!
Since this is a blog on Pakistan, I might add that its not only the pakistanis who find it hard assimilating in western cultures, but also those foreigners/westerners who live in pakistan.
One must explore the positivity in any culture. Its the pessimistic identification which is keeping the Pakistani migrants in isolation. And this is what scares me - failing to identify the diminishing positive aspects of Pakistan's culture every passing year..

maryam i like your article..however what you will notice when you return to pakisatn any time soon is that apart from "modernizing"-dating etc(if that is what someone would call modernization) there has been a rapidincrease in the amount of hijabi's(girls wearing scarves)in pakistan recently.what scares me the most is that these so called (religious,pious "covered")females are usually the ones who are the most frustrated and mostly found sneaking out, going to discos and doing "not-so-modest"activities ;){lol}these girls are not necessarily forced to wear scarves and most of them usually do this by choice. I Just DON't get the DARN freakin' POINT

salaam sister, excellent article. i know exactly how you feel. living in the states, a lot of pakis are very conservative and when we go back home it seems like we have been living in some village, and the people there have been living in america. pakistani youth needs direction now more than ever.

Such a realistic and tempting viewpoint:-)i hope people like you gather up to work for better Pakistan:)

i went for my masters to the UK in 2003 and wen i came baq two years later, things definitely had changed. it was a culture shock for me too and i felt 'conservative' in front of all the people who i met. you are right maryam, things are changing far more rapidly in this part of the world than anywhere else.

I am a British born Pakistani. My parents left Lahore in 1970s and i guess held on to the values of that time. About 25 yrs later when it was time to get married I preferred to find a "simple, traditional" girl back in Lahore. But I had the same experience as Maryam...the Lahori girls were more "westernised" than me! In the end I did find the traditional girl of my dreams...but not in Lahore...