Lahore went rangeela with Basant but debate continues on the festival’s legitimacy in Pakistan.

[Pictures by Usman Ahmed; Viewpoint by Maryam Arif; Views expressed are independent of the photographer.]

The spring festivities of Basant are over. Kites no longer colour the sky. Boys no longer spend evenings on rooftops. But some questions linger on. Like who owns this festival?

Is it the Hindus?

How many of you Pakistanis have heard that Basant is an un-Islamic festival because it supposedly traces its origin to Hinduism? Now, how many of you know that Basant was celebrated primarily in the Muslim-dominated areas of the Indian-subcontinent? (Of course there is the Sufi connection.)

We Pakistanis are a deeply religious people who like to compartmentalize things in perfectly neat boxes. Fortunately, some traditions refuse to be contained and Basant is a good example. It overflows religious boundaries, merging with nature’s seasons. Any problems?

Do wealthy people own Basant?

In Lahore, it is wondered if the rich has hijacked the festival. Corporations have done their best to claim the celebrations with their advertisements, sponsorships and high-class functions. Rooftops of five star hotels are booked in advance for celebrities and the economically well-off. But what about the ordinary people of the walled city? What about the poor with their humble kites and eager smiles? Indeed, their celebration and enjoyment of the event is as real as anyone’s.

Do men own Basant?

When it comes to Basant, men do not own it any more than women. Perhaps it is the only time of year when it is acceptable for girls to be seen with boys- flying kites, blowing whistles, laughing and rejoicing, even exchanging glances with neighbors. It is one festival where men and women come together to share the excitement.

Does General Musharraf own Basant?

What then of those who lose their lives to Basant? Every year during the kite-flying festivities, several people are killed by glass-coated or metal kite strings. Metal or glass-coated strings help cut the strings of rival kites - the main objective of the sport. But they also catch unsuspecting bikers across the throat, at times with fatal consequences.

In our joy and excitement we forget the heavy price some innocent souls have to pay. Isn’t that why General Musharraf wanted to ban the festival? Perhaps the General owns Basant if he reserves the right to ban or curtail it. At least he feels so!

But let’s not allow anyone steal our Basant from us. It is a festival of all of us Pakistanis. We’ll be more responsible and cautious but we will celebrate Basant next year, and next year too, and the year after too and then again...

These pictures are by Lahore-based photographer Usman Ahmed. 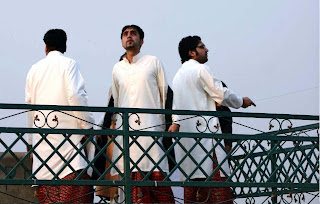 Only One Patang for Me? 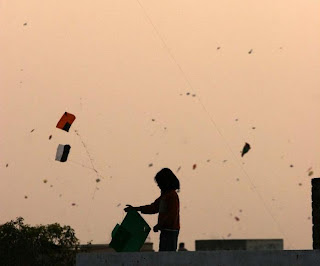 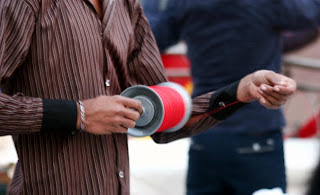 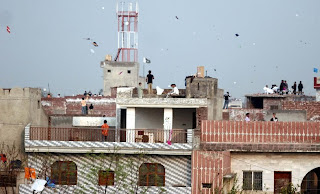 Fly But Don't Fall Down! 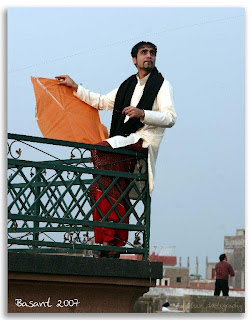 This is a thoughtful article. Basant is owned by nobody but each of us Pakistanis. The photographs are also very good.

We will not let any general take basant away from us. Nor will we let men alone own basant!
Great article. Maryam, I like the semi-revolutionary impetus you have. Way to go!
I really didn't like the pictures though. Basant is a very beautiful and colorful event, I wonder why the photographer wasn't able to capture the beauty of basant (read girls) and why did he just focus on a select number of boys, who by the way weren't even eye candy by any standards

On this year's basant, the local police adorned an entertaining sight while roaming the streets carrying a desi-ladder atop their armoured vehicles. They were given orders to arrest the rooftop and 'stringed' violators!
Nice thoughts indeed. Trust Ms.Maryam to inquire about men's ownership in basant! I shall introduce you to some championship 'patang-baaz' ladies, for equality's sake!
I believe the General could never sieze this festival, and the people shall again and yet again, never seize to celebrate it either.

What a lovely piece. true basnat belongs to nobody but to people who just want to enjoy good moments while being attached to old traditions. Pictures were also very good. Thanks so much.

"Perhaps it is the only time of year when it is acceptable for girls to be seen with boys- flying kites, blowing whistles, laughing and rejoicing, even exchanging glances with neighbors. " Now that ain't fun, need to have girls all round the year ;)

Thank you for sharing this information. The information was very helpful and saved a lot of my time.