Editorial – The Changing Face of Pakistan 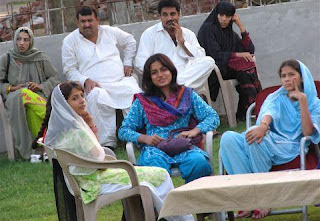 Is it merely skin-deep?

The St. Valentine's Special Series Dating Scene in Pakistan has ended. This feature was launched on February 14th to investigate how it is like to be a young person in today's Pakistan. There were many queries in the begining. Doesn't Islam come in the way of lovers? Isn't this country deeply conservative and its people intolerant? Is not Pakistan a place where a rape victim could be lashed for being raped? Is not having sex before marriage a punishable crime?

Pakistan Paindabad was privileged to have eloquent Pakistanis agreeing to share their views with it. Mr. Raza Rumi, a Lahore native working in South East Asia, said that "platonic interaction and meeting (between boys and girls) is not un-Islamic." Mr. Usman, a young man from Karachi, observed how Indian films with their "song-and-dance spectacles of love, dating, and longing leaves a deep impression on youngsters." Mr. Tehman Lall, a Lahore-based MBA student, talked of "complete strangers getting to know each other in music stores."

Certainly, these are interesting times. But how was it twenty years back? A gentleman, who does not wish to disclose his name, recalled his young days when it was difficult to be friendly with "good girls supposed to be modest and chaste." The Karachi native now lives in North America. If he returns, he will not recognize his country. Ask Ms. Maryam Arif, a young woman in Boston, who decided to retain her cultural identity by wearing dupattas and parandas. However, on a visit back home in Lahore, she discovered "the locals were bold in their fashion statements."

Just how "bold" is the society? Acclaimed photographer Mr. Usman Ahmed described the phenomenon of couples driving in "cars with black mirrors" all around Lahore – so "no one can see inside."

Indeed, reading Dating in Pakistan tempts one to believe we may be a conservative society but transition is in progress. But such a conclusion would be misleading. Pakistan is more than Lahore-Karachi and our six participants from these two cities belong to a miniscule 6.3 percent of the country's population that has access to internet. Of course, their perspectives have helped in understanding the nation better but it cannot present a complete picture.

We must remember there is another Pakistan too. Not far from Lahore's glitter lies a village called Donga Bonga. In January this year two people, in their 40s, were stoned to death. Their crime – they were having an affair.
Posted by Mayank Austen Soofi at 2:27 AM

Multiple realities co-exist in Pakistan. It is no longer possible to ignore or isolate ourselves from the beliefs, views and opinions of those who do not think like us. Apparently some fanatics are going around Lahore telling women to cover their heads. It is scary to think what will happen if these people take over. Are they taking over? Will we vote them into power like the people in NWFP did? Do we have a choice or will the military decide for us? Will they form an alliance with the mullahs to make their position secure at home or crack down on them so they can look good in the international community as an ally in the war on terror?

You are right, Maryam. Multiple realities co-exist in Pakistan. This apply to all the socities. People should have the right to hold onto their beliefs whether they be viewed as regressive or progressive.

What we need is tolerance - learning to co-exist with people who may or may not believe in your lifestyle. There is a place for everyone to live their lives as they want to. Only if this is tolerated!

While there is a current blossoming of freedom "on the ground", there always exists the danger of an eventual crackdown. One must be exceedingly careful and not be deluded into a false sense of safety and complacency.

Let us not forget that Pakistan is a dictatorship, and the fallout of the collapse of the current government could very well lead to something much worse.