Editorial - Outrage and Unrest in Pakistan 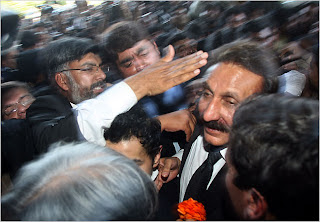 Mr. Musharraf fires a judge and falls in trouble. Here is what he should do next.

What on earth is happening in Pakistan? People protesting in the streets; TV channel office attacked; and a sacked judge being portrayed as the new Martin Luther King!

It all started on March 9, 2007, when Mr. Musharraf sacked Iftikhar Muhammad Chaudhry, Chief Justice of the Supreme Court of Pakistan, after charging him with “misconduct and abuse of power”. He was put into a virtual house arrest, his telephone connection was cut off, and newspapers were stopped from reaching him. (Restrictions on his movement have now been lifted.)

The government-sponsored story suggested that the suspended judge had used his influence to get a job for his son in the police department, besides accepting a BMW as bribe. But the real reason behind Mr. Chaudhry’s dismissal could be more serious. The Supreme Court bench under him had directed the government to trace missing people, a growing phenomenon where men and women, too demanding for the establishment, are being abducted, imprisoned and sometimes tortured (allegedly) by the country's all-powerful intelligence agencies . The Human Rights Commission of Pakistan has counted 400 cases since 2002.

Other than this, two extremely sensitive cases were to be heard in the Supreme Court in the coming months: the first concerned the dual nationality of the Prime Minister Shaukat Aziz that could threaten his eligibility to be Prime Minister. The second, and the more important, was whether or not Mr. Musharraf could run in the election for the next Presidency term.

With Mr. Chaudhry proving to be a man with a mind of his own, President Musharraf decided to dispose him so that he could be "pleased to appoint the most senior judge available, Justice Javed Iqbal, to act as acting chief justice of Pakistan."

Poor Mr. Musharraf had calculated that the predictable uproar would settle down following a couple of outraged newspaper editorials and television talk shows. He never expected that Mr. Chaudhry would refuse to tender his resignation, lawyers would strike, apolitical people would throng the streets, and the so-called fundamentalist parties would join forces with the so-called moderate forces in support of Mr. Chowdhry. But all of this took place. And worse may happen.

At best, the agitation would stretch out for a few more days before fizzling out. At worst, it may pick up further momentum and even threaten the regime.

Clearly, Mr. Musharraf is in trouble. But he has a way out. He must do what he did to Geo TV news channel after the Punjab Police stormed its Islamabad office for broadcasting the ongoing street unrest.

Say sorry and reinstate the judge.
Posted by Mayank Austen Soofi at 7:08 PM

"(Restrictions on his movements have now been lifted.)"

Wrong. They remain in place. Get your facts right, idiot.

The tinpot dictator has nothing to worry about--the US will continue to prop him up no matter how much he violates human rights and sacks folks.