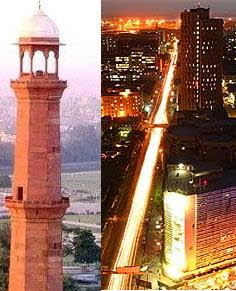 Two cities both alike in dignity, in fair Pakistan where we lay our scene.

This is a tale of two cities, so different and far apart.

However, Kipling is not the only Nobel connection of the city. Nobel laureate Dr. Abdus Salam once taught Mathematics in its Government College. Nobel laureate Har Gobind Khorana once studied in its Punjab University.

It is also a gourmet jannat. Nihari is relished at Bhati Gate. Payas are ordered in Hira Mandi. Halwa Puri is devoured in Railway Road. Kheer is savored in Gawalamandi. Sheeshas are smoked in Cooco's Den.

To this day, it remains one of the most boisterous cities of the world. Sir Syed Ahmed Khan had called its people 'Zinda Dillan-i-Punjab'. Muhammad Ali Jinnah had called it the 'Heart of Pakistan.'

Indeed, from Café Zouk to Crow Eaters' Cafe, from Tollington Market to Liberty Market, from Mall Road to Alam Road, from Shahi Qila to Minar-e-Pakistan, Lahore is Lahore.

It was the city Pakistan's founder Muhamamd Ali Jinnah chose to live in after founding his nation. It was Quaid-e-Azam's birthplace and also his burial ground. It was the first capital of the Islamic republic.

Today, it is the New York of Pakistan – the Islamic republic's multi-ethnic melting pot with its multitudes of Muhajirs, Pakhtoons, Sindhis and Baluchis. It is the nation's commercial capital – its money bank with the largest stock exchange and the largest airport.

It has many centuries co-existing next to each other. Its waters are navigated by uniformed sailors as well as bare-chested fishermen. Its crowd is both cosmopolitan and tribal. It has the old-world Saddar and the new-world Zamzama. It offers discounts in malls and bargains in bazaars.

It is really a city with two cities – beautiful and ugly. Beautiful Karachi - rich, sexy, fast, pulsating and dynamic. Ugly Karachi – poor, uncouth, violent, unplanned, and dangerous. It is the worst nightmare of Pakistan. It is the best hope of Pakistan.

As bloggers and those that enjoy the internet at home or work, Satellite television, cell phones and cars / bikes mostly, I reckon our exposure to the systems that govern us on an average is alot lesser to that of the common man in both of our countries. Think about it...when was the last time you went to a government hospital or a government ration shop or a police station or an unemployment council? Have we guys a clue on what these common people are put thru? And the same perhaps holds good for pakistan. We have millions of people well below the poverty line. Millions of homes that are completely and willfully denied sanitation and quality healthcare with directed malice ( driven by discrimination and hatred or lack of accountability). Yet...we've allowed our politicians and armies to con the living day lights out of us. In the name of national security, theyve raped our tax money.

In india, it sometimes hurts to see just how ignorant most of us have become. All our traffic signals in major cities are filled with beggers. All our places of worship have endless hungry cats on the walls that could either become a hard working labourer ( a one in a ten chance) or for that matter a terrorist / robber/ murderer etc. and I really dont blame them!

So.....in the name of 'the being' that created all of us - be it Allah, Narayana, Jesus Christ, Budha and the endless faiths that are practised in each of our countries....JUST WHO THE FUCK IS OUR REAL ENEMY??????

P.S.
" Never impose your language on someone you wish to reach" - Anonymous.

mayank thankyou so much for writing this lovely analysis.
you are a true hero for what you are doing for the two countries!