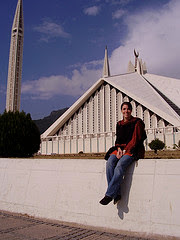 The country has unleashed an ambitious "Destination Pakistan 2007" tourist campaign, but is the place safe?

Even as Pakistan launches an ambitious campaign to lure tourists - "a journey of unbridled joy" - the U.S. Department of State continues to warn its citizens. Don't go there unless you have to.

Similarly, Britain's Foreign Office warns of a "high threat from terrorism and sectarian violence throughout Pakistan." Canada advises "against non-essential travel to Pakistan" while Australia advises reconsidering your need because of "the unpredictable security situation."

These warnings sharply contrast with the optimism of Pakistan Tourism: "We invite you to a journey of unbridled joy and beauty. From the mountains of the Himalayas and the Karakorum, to the rich hospitality of Lahore and the breathtakingly stark beauty of the Thar Desert, Pakistan offers you a spectrum of experiences that will leave you breathless."

"Breathless or without the breath", the perennially sarcastic may smirk. Eminent Pakistani columnist Irfan Husain called Tourism Ministry’s "Destination Pakistan 2007" campaign to attract one million foreign tourists as another instance "when the antics of our rulers assume surreal proportions." Not to be outdone, Karachi’s first citizen Ardeshir Cowsajee, once Managing Director of Pakistan Tourism Development Corporation (PTDC), gave his own Ardeshique slogan to the marketing campaign – "Come and pray"!

Pakistan’s troublesome international profile is a real speed-breaker. What does the credit card-laden tourist imagine when he glances at Pakistan on the world map? Does he confuse the breathtaking Karakorum cliff drops for Osama bin Laden hideouts? Does he ignore the vibrancy of Karachi’s cosmopolitanism in favor of its reputation as journalist Daniel Pearl’s death trap?

Put simply: Is this country swarming with terrorists? Are women showing their skin pelted with stones?

Well, no. There are equal chances of being stabbed in a Karachi slum as in a Washington DC suburb. Partially naked woman are more prone to endure a hail of stones in Jerusalem's Meah Sheraim neighborhood than in Peshawar’s Qissa Khawani bazaar.

But what if the tourist is a Yank? Is there credibility in the State Department's warning?

Lahore-based photographer Usman Ahmed doesn't think so. His sister-in-law is a white American. "While she is noticed for her different looks, no one is ever hostile," he says. "The instant people realize she is an American, they are extra nice to her." So there goes Pakistan-hate-Americans myth. "People do have strong opinions against the American government, but the disgust does not trickle down to individual Americans."

In the same vein, novelist Mohsin Hamid wrote in an op-ed in The New York Times that the vast majority of Pakistanis want nothing to do with violence. When thousands of cricket fans from archenemy India wandered about Pakistan for days in 2004, not one was abducted or killed. "At my own wedding two years ago, a dozen Americans came, disregarding State Department warnings. They, too, spent their time in Pakistan without incident."

Mr. Hamid is not being patriotic, just honest. And in my own case, as an Indian Hindu, I visited Pakistan in 2006. I was on my own in Karachi, with no fellow countrymen for company and no friends in the city. But every time Pakistanis came to know about my nationality, doors opened and smiles flashed in hotels, railway reservation counters, and roadside biryani stalls. Even the Karachi police, infamous for its brutalities, proved to be exceptionally polite and helpful.

The reality is that Pakistan is a rather "normal" nation. Like any destination, a sensible tourist should avoid disreputable nooks and respect the local ethos and social courtesies. He'll return home with a lifetime of Lonely Planet memories.

Really, do escape to the magic of Pakistan in 2007. Else, remain a loser.
Posted by Mayank Austen Soofi at 3:29 AM

Been to Pakistan, Lahore.. found Pakistan a completely different country. People are loving, very helpful, there are unseen beautiest.
***** Will want to visit again.

I have not made it there yet--maybe later this year.

I have a number of Pakistani friends who believe it is quite safe there.

I would like to see the wonderful music group Junoon in its "natural habitat"--saw them in Jordan and they were dynamite.

I definitely have it in for the dictator of Pakistan--but the people are not he.

i've wanted to go to the mountains of the Hindu Kush for years. I understand thats a bit of a tall order right now but someday... lucky you btw! :) how tough was the visa?

Pakistan is a safe,welcoming country, however it has its share of violence. That violence is the only thing Western media covers and Western public reads. So good luck to "Visit Pakistan 2007", they have a vertical, steel hill to climb.

Hi Guy.. I have read tourist reviews about Pakistan in many website and bring them in one place...... visit this site and email me .. if u like it.. www.HiddenTourism.com