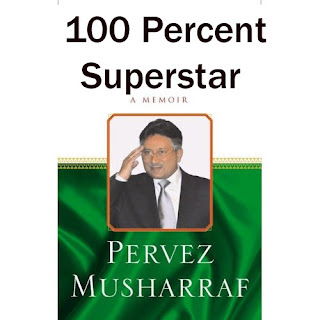 Mr. Musharraf’s passion for “percentage-analysis” makes him a unique statesman of our times.

Secular, intelligent, brave, and a born survivor, Pakistan’s President-General Pervez Musharraf stands out as the most charismatic of world leaders. Unlike other boring heads-of-state, Mr. Musharraf is incisive, exact and fond of analyzing matters-of-concern down to their last percentage figures. A relook at some of the statements made by the General will make it clearer.

On the possibility of India-Pak war (2003)
…impossible. Two hundred percent, there won't be war.

On the certainity of Mullah Omar having a hideout in Afghanistan, not Pakistan (2007)
500 percent sure.

On destroying al Qaida sanctuaries and communication systems (2005)
I'm not saying we have achieved a 100 percent success, but this is definitely a success in the war against terrorism.

On his confidence if he would get Zawahiri and bin Laden before they get him (2003)
I can't be 100 percent sure.

The percentage of those who voted in the 2002 referendum in favour of Mr. Musharraf for another five-year term of presidency - 98%!
Posted by Mayank Austen Soofi at 4:34 PM

Superstar? He's an asshole, is all i can say! ... excuse my french please but really this guy is taking the country down with him!!
P.S. It's funny the way almost all his comments are in percentages..effing general...:(

oh and btw Mayank... did you actually say secular? Wow man, u must be kidding me...dude, he is the guy who formed a coalition with the MMA, no? and it was in his time that the mullahs, who are now the biggest threat to the country, came into power. Secular my ***...
Again, sorry for being abusive but this really does piss me off, I do hope though that i am not the only person who's pissed off by all of this.
P.S. How many people from the total pakistani population voted anyway!

ahaa! so he's 500% sure that Mullah Umar is not in Pakistan!, thats interesting

I'm 125% sure this is the funniest thing on Musharraf that I have read!

I am 113.28% sure he is a power hungry a**e.... BB has come back to s***w us a lil more... sharif sahib is just a mo*on fixated on tikkas....
man we are doomed. s***w all the army people and their golf courses and govt financed family trips abroad.
Pakistan zindabad.......all politicians and fauji badmaash murdabad