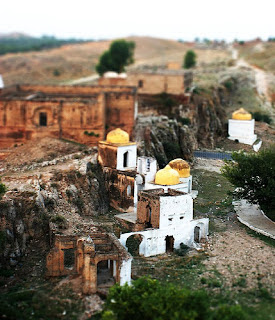 Pakistan has started taking note of its Hindu legacy.

[By Mayank Austen Soofi; picture of the Katasraj tmple by Usman Ahmed]

It's universally acknowledged that Hindus in Islamic Pakistan are treated as second-rate citizens. Home to 2.5 million Hindus, mostly low-caste peasants, the nation is finally beginning to acknowledge their value and heritage. But is this progress for real, or a temporary ploy by the regime to please the West?

But first, a glance at the feel-bad figures. Since Pakistan's creation in 1947, the Hindu population of Pakistan has plummeted from 20% to 1.6%. Many fled at the outset because of the partition of British India that led to the creation of Muslim-dominated Pakistan. Another important reason could be recurring accounts of discrimination against Hindus. In 2005, eminent columnist Irfan Husain reported that three daughters of a Hindu couple in Karachi were kidnapped and forcibly converted to Islam. Mr. Husain wrote, "Given the spate of conversions, some voluntary, some forced, the insecurity among the minorities, especially among Sindhi Hindus, is understandable."

A 2007 BBC feature reported that minorities such as Hindus remain outcasts despite represention in every major political party. In a story titled Many Hindus Are Leaving Pakistan, in the Indian newsweekly Outlook, Pakistani journalist Amir Mir said, "Pakistan's minorities record is truly appalling. Sadly, (Pakistani President) Musharraf is doing nothing to right it."

The U.S. State department's International Religion Freedom Report 2006 stated there has been no cessation of complaints of police inaction in cases of attacks by extremists against congregants and property belonging to minorities.

Sometimes even Islamic sects are not spared. Pakistani law declares Ahmadi Muslims to be non-Muslims, prohibiting them from engaging in any Muslim practices. Government forms, including passport applications and voter registration documents, require anyone wishing to be listed as a Muslim to denounce the founder of the Ahmadi faith.

Some blame should also be pointed towards the blasphemy laws which have been often invoked to harass Hindus, Christians and liberal Muslims. From 1985 to 2004, 601 persons were accused of blasphemy. Of these, 295 were Muslims, 203 Ahmadis, 79 Christians, and 24 Hindus.

Such blatant assault on an individual's religious dignity has no place in a civilized society. If Mr. Musharraf is serious about bringing in enlightened moderation, his government has to do more to make its Hindus (and Ahmadis, Sikhs and Christians) feel at home.

This portrayal of Pakistan's society is only one aspect of the country. There are other realities too. The Islamic republic recently got its first ever Hindu Chief Justice - Rana Bhagwandas. Besides, the regime has lately been respectful towards its non-Muslim heritage. The town of Nankana Sahib, the birthplace of Guru Nanak, the founder of Sikhsim, has been developed as a comfortable pilgrimage centre. The government also allotted Rs 60 million (about $5 million) for the repair of the great Shiva temple of Katasraj in Punjab. It was a rare occasion when an Islamic government restored a non-Islamic religious monument.

Additionally, it may come as a pleasant shock to many that the largest Hindu population in a single district outside India happens to be in Pakistan. Thar, a south-eastern district of Sindh province, houses more than 2.3 million Hindus. In fact, Pakistan just cannot ignore its Hindu legacy. It is everywhere – the country's longest river, the Indus, derives its name from the Sanskrit word Sindhu. Cosmopolitan Karachi has 70,000 Hindus. The Bhuttos - the country's most popular dynasty - were Hindu Rajputs as late as the 18th century. Lahore, the country's cultural capital, derives its name from the son (Luv) of one of the most important Gods (Rama) in the Hindu pantheon.

But heritage is history. What about the troubled present?

One of the greatest Hindu shrines in the world lies in a Pakistani province considered the hotbed of Taliban resurgence – Baluchistan. The temple of Hinglaj Devi, lying on the Quetta highway, is the first principal Hindu holy pilgrimage one would encounter while coming from west Asia. Every April, thousands of Pakistani Hindus flock to the shrine. Situated in a remote, arid and hilly region, the cave temple is venerated even by Muslims who make the pilgrimage as Nani-ki-Haj.

So is Pakistan that disdainful of anything non-Islamic? Think again.

The popularity of Hinglaj shrine, the renovation of the Katasraj temple, the relative freedom experienced by Hindus celebrating their festivals, the appointment of a Hindu Chief Justice, and the tolerant attitude of Pakistani Muslims suggest that the ideals of secularism can co-habit within the framework of Pakistan's Islamic identity. Notwithstanding the constant criticism by doomsayers, Pakistan's core values could perhaps be alive and kicking. The need is for them to be applied on a larger scale. Is it impossible for the country to be a homeland for South Asia's Muslims and still be secular?

Very well positioned. Given how it plays out (you comment about maybe this is all to placate the West is chilling but has to be watched) there could be lessons hear for the rest of that troubled area of the world.

Apart from numbers and places, Hindu influence is pervasive in Pakistan: our wedding customs, for instance, are entirely Hindu, apart from the prayers and the marriage contract itself. The mehndi, mayun, dancing, etc, would be very familiar to any Indian visitor. Similarly, the cuisine and music are the result of a fusion of Hindu and Muslim high culture that evolved over centuries in North India. Spoken Urdu and Hindi are very close, as are the clothes worn in cities and the countryside. Culturally, North India and Pakistan have more in common than do North and South India.

You said: "Many fled at the outset because of the partition of British India that led to the creation of Muslim-dominated Pakistan."

Hindus were driven out by armed looters after Hindu property.

Many Hindus converted to Islam to retain their ancestral property and hence reduced the numbers of Hindus remaining in Pakistan.

Many of the Hindus who live in Pakistan are either poor or not so rich as to be classified as elites. So they are discriminated not only by Muslims, as the article suggests, but also by Upper caste Hindus. Their women are raped by Banyas (upper class Hindus), properties looted, fabricated marriages, prostitution by force, etc. All is done under the watch of a Hindu banya in places like Umerkot where Hindus are in majority, so the dist. chief is generally Hindu as well.

But the Upper caste Hindus, mainly Sindhis or Baluchis, are treated well due to their influence in politics and rice cultivation.

A bit more research on writer's part would have done wonders to the article.

Ameer, whom are you trying to fool? The rapists, the murderers are invariably pakistani muslims. The banya terminology you use is so stupid, there are hardly any banyas left in pakistan, they all ran. The ones left are lower class hindus whom pakistanis contemptuously call haris out of a dig at their religion and treat as refuse. But not only do u refuse to acknowledge this, you blame hindus for abusing their own and give pakistani muslims a free pass. With attitudes like yours, is it no wonder that pakistan will never treat its minorities fairly?

It is true that many Hindus in Pakistan are poor but 60% muslims are also poors.there are thousands of wealthy Hindus owned industry,trade specially Rice exporters are Hindus.Shahid Mahmood