Book Review - City of Sin and Splendour: Writings on Lahore 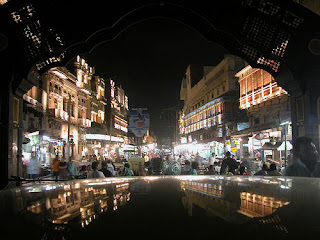 [By Gaurav Sood; the author is a US based political and media analyst. He occasionally writes at Spincycle; picture by Asif Jafri]

A city hasn't been showered with such love since Dalrymple wrote about Delhi. Bapsi Sidhwa's edited volume on Lahore in fact far exceeds it. After all, Dalrymple was nothing but a foreigner who had only spent a few years in Delhi when he wrote the book, while Sidhwa in her endeavor is accompanied by a range of distinguished authors and intellects, only tied together in their love for Lahore.

The love for the city, its landmarks, its famed cuisine, its gourmets, its brutalizing summers, its people, its stories, and its relationships shines through on every page.

Every great city deserves an admirer and chronicler of the calibre of Bapsi Sidhwa – someone who will perspicaciously and assiduously collect stories that celebrate her beauty and look unflinchingly, yet lovingly, at her bruised soul and her warts.

The book strikes an immediate rapport that is akin to being invited to an intimate familial Punjabi gathering. I felt alternately like a kid sitting on the lap of my maternal uncle being told stories about the city, a young adult guiltily listening to the adult conversation about the brutal tales about city's history, and an objective adult reflecting on history, and politics.

There is a warm intimacy that suffuses each of the stories in City of Sin and Splendor: Writings on Lahore. The additional element of emotional immediacy comes from stories that talk about things we South Asians have grown up with. All of it is made available 'naturalistically' by the craft of authors who rarely go beyond what is known. It is an important talent. For authors are always tempted by superfluous cleverness. It is the Jane Austen method of writing in some ways – writing honestly, perspicaciously, and often with great wit about what is known without flirting with the unnecessary or the arcane. It is grounded writing. The authors use words that are well worn and apt and not ones with peripatetic grandiloquent pretensions. The resulting atmosphere in the book is not stifling because of the self restraint, but educated and homely.

I have never been to Lahore. Yet the city stands alive in front of me. Though I don't eat meat, I savored the morning Nihari with Irfan Husain. I shared in the pain of partition with Ved Mehta and Sadat sahib (Sadat Hasan Manto). I stopped to celebrate the indomitable spirit of Ismat Chugtai. I stood ring side as Bina Shah described the long standing tussle between Karachi and Lahore. And I wore my heart on the sleeve when I read Ranamama by Urvashi Butalia. Butalia's phrase, "cracked pistachio green walls" will always stay with me for it describes pitch perfectly the color of walls on some subcontinent homes. I also admired the honest revolutionary spirit of Habib Jalib's Dastoor. How did he know the story of Pakistan before it was ever written?

We are third world denizens. Our cities have always seemed shabby and poor and slung in deep unending mediocrity. The heat has always been brutalizing, and atmosphere dusty and arid. We have always struggled to grow trees and grass in face of hot summers, scarce resources, and petty corruption. Culture has melted into a thick gooey nothingness pressed on all sides from globalization, self-serving politicians, and poverty. Immigration and sprawl have killed the remnants of other things. Our chowks are nothing but traffic choked dusty islands. Yet we have formed familial bonds and come to be part of our cities. We have found times and places to share. We visit each other's houses and exchange stories. People come over when we are in need. We listen to the stories of our doodhwallahs (milk men), and our kaam waalis (maids) and though we love to cavil about them, there is an unsaid human connection. Perhaps that is a bit too sunny an assessment. But indulge me for a little. All of it is held together by the incessant chatter. Conversation is the glue that keeps us together. We haven't yet made conversation into a stylized art of identity negotiation. It is these relations, these conversations, the unsaid courtesies, and the people that Sidhwa celebrates in her book.

The British Raj left its mark on Lahore. Kim's Gun haunts the hollow haunches of the emaciated old city. The gardens and separate civil line quarters for the English Sahibs have entrenched themselves in to the modern hierarchy of the city. More importantly, the Raj has scarred us psychologically. We have never grown to be proud of our heritage and culture. Forever chastened by the West that raced ahead, we have never sat down and taken notice of our heritage. We do pay a lot of lip service to the heritage but seldom do we believe in it.

I am from Delhi, which in many respects can be seen as Lahore's twin. The cities share similar climates, somewhat similar Punjabi dominated cultures, similar histories, similar old-new city Raj-inspired distinctions, and similar heartaches of partition. I could find flavors of Delhi in the book - the 'gates' of the old city, the civil lines area, the colonial bungalows, the partition stories, and the oncoming McDonald's culture. In getting to know Lahore, I felt that I got to know my city better.

He whose light shines only in palaces
Who seeks only to please the few
Who moves in the shadow of compromise
Such a debased tradition, such a dark dawn
I do not know, I will not own

Lahore has suffered from the vicissitudes of the people in Islamabad and Washington. The malaise in its contemporary politics, the perversion to its culture from the Islamists and the secularists, both equally delusional and equally adamant, is quickly reducing this great city.

The single most important fact is that the world is wrecked by a thousand mutinies everyday. With globalization and technological onslaught, the mutinies have multiplied. All unleashed, without prior thought. We try to craft our lives around one while we are led by our noses to the next. It is unsettling to stop and take stock of the grievous loss that we will continue to take on our world.

The remembrances of a city and the love of a city only come naturally to those with time for leisure. To that extent this book is about the padshahs of Lahore. The book is an ode of the ruling class to itself, to its culture, and to its land marks. Yet, often times the book is much more than that. The everyday street is never far in this book. The everyday street may not have the kaamwali (maid) in it, but it does have the patang baaz's, the halwais, the richshaw wallahs, and more. It is that everyday street that I carry in my heart.
Posted by Mayank Austen Soofi at 10:16 PM

It sian amazing book and need not compare with 'City of Djinns".My dad who spent many years as a child and young man(82 yeras now)also liked the book.I have become curious for all the lovely places in Lahore and getting more of Lahre thru Mohsin Hamid's"Moth Smoke". Splendid compilation and good review.

Thank you for this blog : )