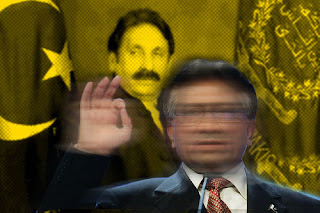 [By Gaurav Sood; the author is a US based political and media analyst. He occasionally writes at Spincycle; picture by Ahmad Ashour]

Iftikhar Muhammad Chaudhry was born more than a year after the partition in Quetta, Balochistan. He went on to work for more than a decade in varying capacities in that province. So it is surprising that the firing of this Baloch has prompted little or no response in Balochistan.

Mr. Chaudhry, now feted as a humanitarian crusader, never once raised his voice when the general sahib ordered a full-fledged military assault on Balochistan. The reason why I mentioned this anecdote is because it serves as a useful example for how much arm in glove was Mr. Chaudhry with the general before the glove was discarded and picked up by the opposition parties.

There is one more twist to the tale – ethnicity. Chaudhry sahib is not an ethnic Baloch but a Punjabi abdagar, whom Balochis despise. We will come back to the ethnic angle later for it remains a factor in Pakistani politics.

As Chief Justice, Chaudhry's reputation rests on two cases – the now famous Steel Mill Case in which he ruled against selling of Pakistan Steel Mills to a group led by a friend of Prime Minister Shaukat Aziz (whose own position is in doubt due to the fact that he holds dual citizenship). Just as a footnote – the sale, which was overturned by Chaudhry, was authorized by a Cabinet Committee on Privatization led by Shaukat Aziz.

The second case that made his reputation was his decision to declare the Hasba bill, the NWFP Islamist bill, unconstitutional. Chaudhry was also vocal recently decrying Pakistani government's complicity with US intelligence agencies and demanding the government provide information about the 'missing people'.

Chaudhry was elevated to the position of Chief Justice by Musharraf in 2005. Since then Chaudhry sahib has played the role of an administration sock puppet admirably except, of course, in the cases mentioned above.

Most of the charges filed against the ex-CJP seem like the de-rigueur perks that a government bureaucrat in a reasonable position considers his right in South Asia – use of multiple cars, requiring "senior officials to receive him at airports", "using helicopters and planes to go to private functions", and forcing officials to help his son get admission in medical colleges and then getting him appointed as a "Grade 18 Police Officer".

Somewhere among the litany of abuses is also this startling fact that Chaudhry wrote decisions on cases worth 55 million PKR. But the scale of corruption allegations can hardly be called dire - certainly not by South Asia's lax standards. Critics point out more serious charges like property fraud and financial embezzlement dog other justices including two members of the Supreme Judicial Council which will hear the chief justice's case. The critics further allege that "the chief justice was singled out because of his past performance which created misgivings in official circles about his likely role in the coming legal battles ahead of national elections, due later this year."

March 9 – Chief Justice suspended. More than the fact that he was suspended, it was the manner in which he was suspended that caught the attention. He was called up to General's Rawalpindi residence, and held incommunicado for what people allege up to two days. The horror.

March 19 – Seven of the country's judges resign including the top judge of Punjab. Newspapers publish the picture of Chaudhry being shoved into a car.

April 3 – Lawyers still on strike. The SJC adjourns the hearings.

May 6 – Chaudhry gives speech in Lahore

May 13 – CJP Iftikhar Muhammad Chaudhry, came to address the Karachi City Bar Association on the 50th anniversary of the establishment of the Pakistani Supreme Court. Except it was not. It was a choreographed political move targeted to gain momentum against Musharraf. The move stalled and unraveled in its own strange way. Chaudhry never left the Karachi airport as PPP and MQM factions waged pitched battles in the streets killing nearly 40 and injuring 150 people.

There are multiple centrifugal forces that make Karachi politics so volatile - the Mujahir-Sindhi-Pathan divide, the enormous class divide, the interaction between those two divides (ethno-class angle), and the divide created by self serving politics.

The political fortunes keep shifting depending on who is in power in Islamabad and the wishes of the Americans. This current phase of violence saw the lines being redrawn across the MQM –PPP axis but with one key variation – MQM and PML-Q (Musharraf's party) are now aligned.

There is a reason for the realignment – MQM is the only viable political force against Jamaat-e-Islami Islamic extremists that the US government so abhors. There is little doubt in my mind that this is a temporary alliance for Muhajirs have never had strong allies. It is likely that this current episode will eventually end with PPP and Musharraf coming to some kind of deal to thwart both MQM and JI.

One look at the people going to welcome Chaudhry is enough to tell that they were these super-rich elites. PPP has today become a party with significant traction amongst the landowning elite. In Karachi, it is represented and funded by the industrialists and the business owners.

There was of course bias in the way media – and here I mean Western media for that is what I had access to – covered this event. It was the story of how a hero for political freedom and his supporters were thwarted by the autocratic government backed militia. The truth on the street was a bit different.

The most worrisome aspect of the Karachi violence was the collusion between the police and government. The 13,000 strong paramilitary that was deployed to control violence stood casually by as both the MQM and PPP backed militia sparred with each other. What brought home the complicity of the police for me was this classic video clip of a person held by the police on the street still being beaten by, who I am sure, were Musharraf supporters. Some have alleged that the indifference of the paramilitary forces was because they are Punjabi dominated.

The strangest thing in the whole Chaudhry scandal is the alacrity with which lawyers banded together to protest the firing of the Chief Justice. Mobilization of lawyers seems like a handiwork of the PPP. It is unclear as to why would the lawyers protest – they didn’t protest when Mushy was made president. Why are they suddenly so worried about political freedom? It seems to be an exercise in political opportunism.

Lastly we must focus our attention on Chaudhry. He is neither a crusader for freedom nor a deeply corrupt judge. Chaudhry is somebody who dallied with anti-government stance, found himself in the deep-end, got scared, found the rope thrown by the opposition parties and hung himself with it. Now Karachi hangs in balance with him.

Back to the Future - Zaffar Abbas; in Dawn

Blood and batons spur Pakistan row; in BBC
Posted by Mayank Austen Soofi at 12:57 AM