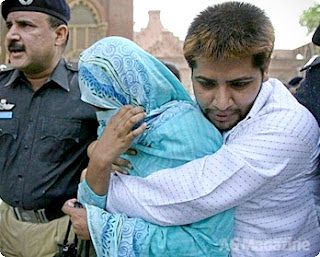 Two women in love married each other and are now in jail.

In Pakistan it must be easy for homosexual women to avoid punishments for adultery - penetration being essential for imposition of the Section 377 of the Pakistan Panel Code. Even then Shumail and Shahzina, two women married to each other, are not to be envied. They have been sentenced to three years in jail.

Shumail Raj, 31, and Shahzina Tariq, 24, were cousins from Faisalabad, a city in Punjab. Shumail had gotten rid of her breasts and uterus in two sex change surgeries some 16 years ago. Although the operation was not done properly, Shumail at least had beard sprouting out on her face. The cousins later fell in love even as Shahzina was aware of Shumail's condition. They then hastily married in 2006 since Shahzina's family was planning an arranged marriage for her.

Inevitably, relatives started harassing the newly-weds asking for their marriage to be annulled on grounds that it was against Islam for women to wed each other. The couple, unfortunately, resorted to an action they would rue later. They approached the Lahore High Court this May to seek protection.

Things did not turn out the wishful way. The court-appointed doctors examined Shumail and decided she was still a woman. The judge, Kahawaja Mohammed Sharif, sentenced them to three years imprisonment for lying, besides imposing a fine of 10,000 rupees ($200). However, the charge of committing the act of unnatural lust was dropped.

"Neither Islam nor our law allows marriages of the same sex. This mistake cannot simply be overlooked," Mr. Sharif said in his verdict. He also ordered for a criminal investigation into the surgeons who operated on Shumail.

Stung by the verdict, the surprised couple, who had approached the court hoping for succour, clasped each other tightly before the police pulled them apart. They have now been separated. Shumail is undergoing punishment in the (women) wing of Lahore's Central Jail Kot Lakhpat while Shahzia has been sent to Faislabad district prison.

"We're not homosexuals. Ours was a love marriage," a distraught Shahzia said before being led away from her lover.
Posted by Mayank Austen Soofi at 11:31 PM

It's a fascinating story, but it would seem that Shumail is transgendered, not Lesbian. Without a direct statement from the person in question one can't be sure. If indeed Shumail is a transsexual male then they are not homosexuals.

Actually, following this up by googling other articles I see that Shumail is in fact a transsexual male, not a lesbian. This can be confusing for people who are not familiar with sexual orientation (gay/bi/straight) and gender identity (male/female) issues, but simply, a lesbian is a woman who loves women and is content being a woman. A transsexual is born with the physical body of one sex, and the psyche of another. Shumail is a transsexual male, which is to say a man's spirit born into a woman's body.

If this couple were in Iran, they would be better off. The Iranian government is terrible to homosexuals, but surprisingly good and supportive for transsexuals. Shumail would be granted the surgery, recognized as a man, and able to marry Shahzina.
An interesting twist, according to the story in the BBC, is that Shahzina's family apparently brought this to court as being unislamic. Rather, these pious people they were wanting to sell her into a marriage to pay off her uncle's gambling debt!
http://news.bbc.co.uk/2/hi/south_asia/6697527.stm

InshaAllah, I hope their appeals will resolve to their favor. Let us keep Shumail and Shahzina in our du'a and pray that Allah will enlighten the judges and speed justice to the young couple.

That is really shameful story for Islamic Republic of pakistan.