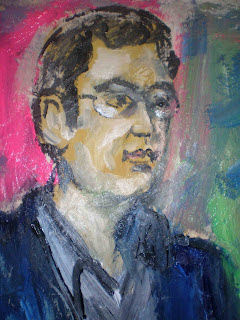 Explaining the pull in terms of rating and ranking.

[Text and picture by Raza Rumi; He maintains the blog Jahane Rumi and writes on literature, history and society for The Friday Times – Pakistan’s popular weekly magazine.]

This is the sixth article in the Proud, Powerful and Pak series.

I am averse to the ratings and rankings that characterize the junk-journalism of our times. Much like the embedded style of reporting such a view remains partial and often ignorant of the nuances and layers of subtext that are almost unachievable in the pop-view of the world.

Readers might question this apparent paradox as on the one hand I am participating in this top-five series and on the other I am also being critical. Well, well this is kosher from a South Asian perspective as we remain a mythical-modern bundle of contradictions.

The real reason for me to ‘submit’ my top 5 is the inquiring spirit of Mayank Austen Soofi whom I don’t know and have never met. But I am quite empathetic to his efforts at understanding Pakistan. At least he ventures into the ‘other’ territory and unlike the mainstream media and writers, does not view Pakistan as a threatening collage of burqa clad women, terrorism and gun toting radicals. Even as he carries out his current obsession, i.e. Pakistan, there are many in the blogosphere who have questioned his motives and alleged deliberate derision of Pakistan and its inhabitants through his writings. Since I do not suffer from this sort of irrational paranoia, I am happy to let him write more on my country. At least there is one alternative voice, one un-clichéd perspective from the other side of the border. Even if my young friend employs a clichéd format in this series, it is better than ‘high writing’ churning more clichés!

So, Mayank Mian, here are my top five reasons for loving Pakistan:

Pakistan is not a recent figment but a continuation of 5000 years of history: quite sheepishly, I admit, that I am an adherent of the view held by many historians that the Indus valley and the Indus man were always somewhat distinct from their brethren across the Indus. I do not wish to venture into this debate but I am proud as an inheritor of Harappa, Mohenjo-Daro and Mehrgarh (not strictly in this order) and this makes me feel rooted and connected to my soil as well as ancient human civilizations and cultures.

It also makes me happy that no matter how much the present-day media hysteria about Pakistan (and “natives” in general) diminishes my country and region, nothing can take away this heritage and high points of my ancestral culture. Pakistan is not just Indus civilization – it is a hybrid cultural ethos: the Greek, Gandhara, the central Asian, Persian, Aryan and the Islamic influences merge into this river and define my soul – how can I not be proud of this?

I simply love the Pakistani people – they are resilient, diverse and most entrepreneurial. They have survived calamities, famines, upheavals, injustices and exploitation and yet, by and large, retain a sense of humour. I am not naïve to say that they are totally free of the various bondages of history but they display remarkable entrepreneurial and creative potential. Most of them are “real” and rooted and yet not averse to modernity.

There is an urban revolution taking place in parts of Punjab and Sindh and the drivers are neither the state nor external donors but the people themselves. The private sector has even contributed to build an airport. There is an ugly side as well: the absence or predatory activities of the state (e.g. Karachi) has also provided a breeding ground for mafias but this is not a unique Pakistani phenomenon. From LA to Jakarata, such groups operate within the folds of urbanization.

I am proud of my people who have proved themselves in all spheres and countries – whether it is Professor Abdus Salam, the Nobel Laureate or Shazia Sikander, the miniaturist of international fame or Mukhtaran Mai who has proved her mettle in giving a tough time to forces of oppression.

There is inordinate focus on Pakistani madrassahs, the pro-Taliban groups and the violent jihadis. How representative are these groups? Only Pakistanis know that such groups are marginal to the mainstream attachment to and practice of religion. The rural folk are still steeped in Sufi worldview and many versions of Islam exist within the same neighborhood. Of course there is manipulated curse of sectarian violence but that mercifully is not embedded despite the attempts of big external players and the octopus-like state agencies.

Ordinary Pakistanis, such as me, value their Islamic beliefs, are God fearing and follow what is essentially a continuation of the centuries old traditions of spirituality that survives in the folk idiom, in the kaafis of Bulleh Shah, and in the verses of Bhitai and Rahman Baba. Our proverbs, day-to-day beliefs are all mixed and laced with history, oral tradition, Sufi lore and of course Islamic simplicity. It is another matter that there are individuals who want to hijack this thread and impose their nonsense on us – but we as a people have resisted that and shall continue to do so. After all we inherited the confluence of ancient religions and practices.

Pakistan is where Buddha taught and Taxila shined, and where Nanak preached and the great saints – Usman Hajweri, Fariduddin Ganj Shakar, Bhitai and Sarmast - brought people into the fold of Islam. Despite the revisionist, constructed history by extremists in India, the sword had little to do with Islam’s rise in this region.

Well the spirituality of my homeland is not just restricted to the intangible belief systems. It also reflects in the splendors of Mother Nature. From the pristine peaks in the north to the mangroves of the Indus delta, Pakistan blends climates, geographies, terrains in its melting pot. Within hours of leaving an arid zone, one enters into a fertile delta. And again a few more hours put you right in front of otherworldly mountains. The deserts of Cholistan radiate the moonlight and the surreal wildernesses of Balochistan are nothing but metaphors of spiritual beauty.

Where else can I experience the aroma of wet earth when the baked earth cracks up to embrace every droplet and where else can one find a Jamun tree with a Koel calling the gods? An everlasting impression on my being shall remain the majestic sunrise at the Fairy Meadows amid the Karakorams and the melting gold of Nanga Parbat peak. I love this country’s rivers, streams and the fields where farmers testify their existence with each stroke, each touch of earth. I cherish trees that are not just trees but signify Buddha’s seat or the ones in graveyards nourishing the seasonal blossoms.

Yes, I love the aromas and myriad scents of Thai cooking, the subtlety of the French and Lebanese or the Turkish dishes but nothing compares to the Pakistani cuisine. Forget the high sounding stuff; ghar ka khana (homemade food) no matter which strata are you from is difficult to find elsewhere (except India of course).

Whether it is a simple Tandoor ki Roti with Achaar or Palak (in the Punjab) or the intricate Biryani with ingredients and spices of all hues, the food is out of this world. In my house, we were used to at least ten different rice dishes (steamed white rice/saada/green peas/vegetable/channa/choliya/potato Pilau), three types of Biryanis (Sindhi, Hyderabadi, Dilli or just our cook’s hybridized Punjabi version), and my grandmother’s recipe of Lambi Khichdee. The list continues.

In the Northern areas, there are Chinese-Pakistani concoctions, in the North West Frontier there is meat in its most tender and purest form. In Balochistan there is Sajji, meat grilled in earthenware at low heat until all the juices have transformed the steaks into a magic delight. And, the fruits and the sweets – the mangoes that come in dozens of varieties and colours, melons of different sizes, the pomegranates and the wild berries that still grow despite the pollution everywhere!

How could I not love this eclectic cuisine?

…the sum-total of all five: I love Pakistan as this is my identity – immutable and irreversible. Simple.

[Pakistanis from all walks of life are invited to share what they believe are the five best things about their country. You too must be a part of this. Send your favourites to mayankaustensoofi@gmail.com.]
Posted by Mayank Austen Soofi at 6:08 PM

Diversity or not, religious difference or not, radical feminism is no spreading across boundaries and borders

for e.g. India and Pakistan may have their similarities and differences, but the Domestic Violence act of both countries is SURPRISINGLY SIMILAR and a family breaker

Probably modelled on the WAWA, a US / western radical feminist phenomenon, the new domestic violence act in the Sub continent is bound to break families

Mayank! what an inspired man to
interview - and he is so eloquent and
educated and personable about
Pakistan - able to articulate so
beautifully the treasures of pakistan -
and avoid the fundamentalism which
is just a teeny teeeny fraction of this
mulilayered country -
i loved reading this article -
I think it should be published
everywhere -

S told me it is a very hospitable
country as well as beautiful:)

Dear Maddie: You are a bit too generous with compliments. Many thanks for appreciating the spirit of my writing - I do find my country inspirational and I struggled to convey that.

Vinayak: thanks for the comments and the links. I am not sure whether my post mentioned anything on domestic violence. Admittedly, gender relations are most troubled in South Asia (and this includes all the countries) - but this is not common to South Asia only. Domestic violence figures from the 'advanced countries' (such as Australia and even the UK) are equally disturbing.

I am not sure if families will break with more protection on domestic violence? (by the way similar laws could not deliver in manycountries) And I am extremely doubtful whether legislation alone can solve anything. The English passed a law against child marriage and this still happens in India. Look at what the ultra-sound technology has done. I have read reports that there are more boys being born in certain Indian states. I am sure that this will also start happening in Pakistan.
Will laws stop this? I am not sure.
THe solution to tackling patriarchy and gender subordination is more complex and holistic than acts of legislation or NGO alliances for advocacy. It is located in women's economic empowerment, access to opportunity, rights and justice, education and cultural change - and political mobilization for these ends..
www.razarumi.wordpress.com