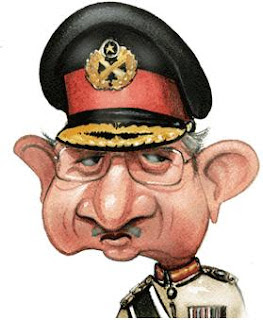 Can Pakistanis be pushed back to the bad old dictatorial days?

[Text by Mayank Austen Soofi; Picture sourced from the internet.]

Taking note of the protests, Pakistan government, on June 7, suspended implementation of the media ordinance against the electronic media till a committee reviews its content.

Those with fond memories of General Zia-ul-Haq, Pakistan's last true dictator, can sit back and wink. The two-skinned President-General Pervez Musharraf has crawled out of the pretensions of being a despot-democrat.

No longer would Karachi socialites have to undergo embarrassments of discussing the intricacies of "genuine democracy." Lahori 'intellectuals' too could dump the concepts of "enlightened moderation" to their rightful place – waste bins. Hapless viewers are rid of maddening talk shows of the uppity TV news channels. The pre-fall innocence is lost and chastened Pakistanis must prepare for a winter of genuine dictatorship.

On 4th June, a deeply unpopular Mr. Musharraf killed a genuine reform his regime had helped blossom. New restrictions have been imposed on electronic media. Amendments were introduced to the Pakistan Media Regulatory Authority (PEMRA) Ordinance, 2002. PEMRA can now suspend the licences of TV channels if they operate illegally or violate PEMRA rules. Under a new section, the PEMRA authorities have been authorised to make new regulations without informing parliament. The new laws also deprive the media of the right to be heard at a Council of Complaints before being punished for violations.

The ordinance raises possible fines for violations from Rs 1 million to Rs 10 million. It also brings Internet Protocol TV, radio and mobile TV under PEMRA regulations. The new ordinance has come into force at once. In a promising start, the government suspended the transmission of two private television channels - Geo TV and Aaj TV in major parts of the country.

No one must be surprised. The media had it coming. Taking Mr. Musharraf's macho graciousness for granted, it sought to cross the limits by uninhibitedly broadcasting unprecedented public protests following the General's dismissal of an independent-minded Chief Justice early this year. His government, or let's say just him for the government hardly matters in the Musharrafian scheme of things, had started frowning over the increasing tendency of the press to criticise him, his policies, and worse, the army – Pakistan's holiest cow.

Noisy talk shows asked Musharraf to throw away his army uniform. He protested that the dress "has become part of my skin". (Soon enough a newspaper column appeared mischievously titled Must we now learn how to skin?) TV channels broadcasted a fiery Superme Court seminar in which the dismissed Justice observed, "power corrupts and absolute power corrupts absolutely."

In spite of Mr. Musharraf strongly urging "the media not to politicise a purely judicial and legal matter," the excited journalists refused to take the hint. Worse happened when Dr Ayesha Siddiqa, a military writer, recently published a book titled Military Inc - Inside Pakistan's Military Economy. Taking on the army for its corporate entanglements, the talk-of-the-town book was denied a launch, as scheduled, in an Islamabad club. Stranger things happened. The book was sold out on the first day itself – an honor not enjoyed even by the General's 2006 ghost-written memoirs. Many suspect state funds were acquired to buy the entire first edition so that 'gullible' people remain unaware of the goings-on in the cantonments.

With the stifling of TV channels, print media fears it could be their turn next. They need not worry. Once a tiger has tasted blood, it won't settle for grass. Pakistanis have seen too much to be lambs again. They just need to roar, a little louder than usual, and Mr. Musharraf would scurry away – his tail tucked between his legs.
Posted by Mayank Austen Soofi at 10:10 PM

manyak,
i'm curious to know how you're qualified to comment on life in pakistan given that you live in Delhi? I know the Internet is a good source but does that really make you a commentator?
best,
shakir husain
karachi

Dear Shakir,
You are right. Internet in itself is not sufficient. I must use this opportunity to explain to all the Pakistan Paindabad readers that this site does not consist of opinionated midnight outpourings of a pajama-clad blogger. All the editorials here are written after much discussions and debates with Pakistanis living both inside and outside the country. We have many pieces which are contributed by Pakistanis themselves. Besides, there are regular interviews with eminent people to understand the pulse of the country. The purpose of Pakistan Paindabad is to highlight the positive aspects of the country which is usually ignored by the foreign as well as the Pakistani media.

Having said that, I realize that making infrequent trips to the country (on the road from Lahore to Karachi; chatting to a Tableegi Jamati from Rawalpindi; sharing Bollywood notes with a Pizza Hut steward from Swat; talking Musharraf with a Bahawalpur womanizer; strolling alone in Clifton Beach; making eye-contacts with prostitutes in Heera Mandi etc.) could not qualify me as a Pakistan expert. For that I would have to reside there!

I urge the readers not to take this website as a primary (or even a secondary) source for understanding Pakistan but as a place where one can recognize that the country is more complicated, fascinating, and modern than is suggested by the international press.
mayank austen soofi
new delhi