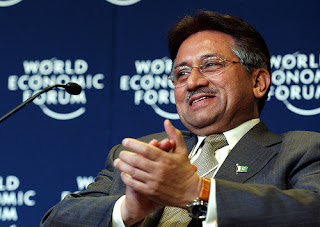 The theoretical basis guiding our thinking is Mullahism-Militarism.
Opening address at the first televised address to the nation after the coup. (October, 1999).

Coups and commerce are the life of the Army; leading generals at all levels must give them full attention and must never on any account be negligent.
"Pakistan Army Inc." , Selected Works, Vol. IV, p. 220.

Democracy is not an Iftar party, or addressing a rally, or casting a vote, it cannot be so leisurely and gentle, so restrained and magnanimous. A democracy is a strategy, an act by which one man exiles another.
"Report on an Investigation of the Democratic Movement in the Army House", Selected Works, Vol. I, p. 28.

We should support whatever Indians oppose and oppose whatever they supports.
"Interview with Three Correspondents from the Dawn; Irfan Husain, Ardeshir Cowasjee, Ayaz Amir", Selected Works, Vol. II, p. 272.

Pakistan’s army is not merely an organ for fighting; it is also an organ for the political advancement, as well as of the production of cornflakes and cement.
In a speech at Karachi Stock Exchange, 16 May, 2007.

The final settlement by dismissals and disappearances is the central task and the highest form of duty. This holds good universally, for judges and for journalists.
Conversations with former Chief Justice Iftikhar Chaudhry. Edited by Kamran Shafi, p. 109.

As for America, we should unite with its neocons and strive to do dealings with them but under no circumstances should we disassociate with its enemies.
On the Correct Handling of Contradictions Among the People, 1st pocket ed., p. 75.

Enlightened Modernism must be developed in Pakistan, and the route toward such an end is military rule. It is also important to unite with the homosexual mullahs, and explain them on the uselessness of women.
In a Letter to Asma Jehangir

The generals have boundless entrepreneurial power. They can organize themselves and can give full play to their business; they can concentrate on production in breadth and depth and create more and more undertakings for their own well-being.
'Action Plans for Creating New Business Opportunities’ at the Annual Meeting 2004 of the World Economic Forum in Davos, Switzerland, January 22, 2004.

As far as my own desire is concerned, we don't want to fight the Talibs even for a single day.
"Interview with the American Journalist Bob Woodward", Washington Post, 12 Jnauary, 2006.

Every enlightened Pakistani must grasp the truth, "Political power grows out of the barrel of a Kalashnikov."
"Problems of War and Strategy”, Selected Works, Vol. II, p. 224.

[The super-secret book whose title is yet to be confirmed by Random House would be launched during Pervez Musharraf’s next state visit to the US.]
Posted by Mayank Austen Soofi at 11:36 PM