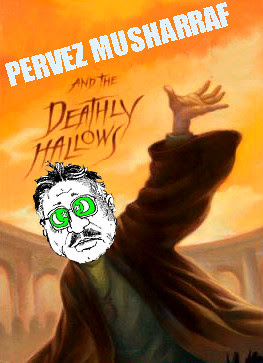 Jamia Hafsa beware. The heart-failure finale to Daughter of the East’s spellbinding novel, 8 years in the making, is not for bearded sissies (or for chicks-with-sticks) --such secrets await in Pervez Musharraf and the Deathly Hallows that no Lal Masjid cleric will make it to the end unbombed.

Luckily, Oxford-educated Benazir Bhutto has prepped loyal Sindhi readers by doling out dark and dangerous tales of 10% Commissions, shot through with tips about family honor and feudal husbands, coups and hanging, and bribes and more bribes. Fear not, you will find no spoilers in our review--to tell the plot (and Abu Dhabi deals) would ruin her Return, and Pervez Musharraf and the Deathly Hallows is a jihad the likes of which Bhutto’s fans have not yet seen, and are not likely to forget. But before you embark on your final adventure with Mushie--bring plenty of tissues.

The heart of the Book is a dictator's fatalistic mission--not just in Mushie's quest for perpetual power, but in his final journey from Army House to Abu Dhabi--and Mushie faces more danger than that found in all 11 Presidents combined, from the direct threat of Indians and He Who Must Not Be Named (his name starts with O), to the poignant peril of losing faith in his own nuke-maker.

Attentive readers would do well to remember President Bush’s warning about making the choice between "us and them," and know that Bhutto applies the same difficult principle to the conclusion of her thriller. While fans will find the answers to hotly speculated questions about Sharif, Aziz, and He Who Must Not Be Named, it is a testament to BB's skill as a storyteller that even the most smart-alecky and sarcastic Pakistani columnist will be taken by surprise.

A spectacular finish to a (admittedly) predictable tale, Pervez Musharraf and the Deathly Hallows is a bitter-bitter read for fans. The journey is rugged, filled with events 90% tragic and 0% triumphant, the battlefield constantly In the Line of Fire, but the final chapter is as brilliant and sudden as a well-executed coup, and Americans will emerge from the confines of the story with heavy hearts, and hopefully feeling 100% sorry for the experience.
Posted by Mayank Austen Soofi at 8:47 AM