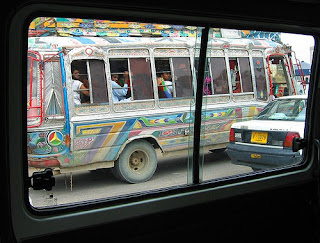 Tracing the nation’s struggle for a common identity.

Pakistani politics cannot be understood without paying close attention to the deep ethnic cleavages that line its polity. The seminal moments in its brief history – the 1971 war with India which led to the creation of Bangladesh, the horrific violence that rocked Karachi in the mid-90s – are a reflection of the inability of politicians to transcend narrow ethno-linguistic boundaries, be it in revenue allocation or in crafting policies around language and culture.

Here below, I explicate how the vicious ethnic politics in Karachi, the first capital of Pakistan and a city which contributes 35% of all revenue to the central coffers, has come to define the ethno-political dysfunction that has marked the country’s history.

The Arabic word Mohajir means a refugee and in Pakistan, it generally refers to non-Punjabi Indian Muslim immigrants. One of the reasons why Urdu speaking are still seen as Mohajirs and Punjabi immigrants not is that while the Punjabi Muslim immigrants were able to assimilate very well within Punjab, the educated Urdu speaking immigrants from the Gangetic plains and elsewhere formed a culturally distinct group in Sindh.

The Mohajirs formed the educated ’salariat’ in the nation’s capital city, Karachi. They were overrepresented in the bureaucracy, media, and managerial positions in the private sector. Politically, they were ardent nationalists who studiously avoided ethnic politics and favored Islamist parties until the reorganization in mid 1960s.

Mohajirs today constitute about 12% of the population of Pakistan and 40% of Sindh. Just to give you a flavor of how much things have changed for Mohajirs - over the past two decades, in fact since the Bhutto era rule of rural-urban quota, they have been underrepresented in state educational colleges and jobs. This has proven to be a bit of a death knell for the economic prospects of a primarily urban group.

The Rulers and the Mohajirs

Pakistan as a nascent nation got off to bad start. Its ‘father of the nation’ (Baba-e-Qaum) – a Jawaharlal Nehru and Mahatma Gandhi rolled in one for that country – died a little more than a year after its creation. Whatever little chance the nation had of enlightened leadership vanished as Liaquat Ali Khan, a close confidant of Jinnah, was assassinated merely four years into his reign as a Prime Minister. Then after a period that saw 6 prime ministers in 7 years.

Mohammad Ayub Khan grabbed power in a coup and steered Pakistan into an alliance with US. Midway during his rule, he fought and won elections against Fatima Jinnah in 1964, which were widely seen as riged. Mohajirs sided with Fatima Jinnah in that election and suffered targeted violence at the hands of Gohar Khan, son of Ayub Khan, for such temerity. (Just as an aside Ayub Khan’s son Gohar Ayub Khan was Pakistan’s Foreign Minister in the Nawaz Sharif government and Gohar’s son, Omar Ayub Khan, is Pakistan’s current Minister of State for Finance.)

Ayub Khan in 1964 moved the capital city from Karachi to Rawalpindi on an interim basis and then to Islamabad. The move was widely seen by Mohajirs as a way to marginalize them. In 1969, he turned reigns over to the only second Shiite after Liaquat to lead Pakistan, General Yahya Khan.

Yahya Khan famously led Pakistan into another losing war with India in 1971 that led to the creation of Bangladesh. Following the 1971, nearly half a million Bihari Muslims, who had moved to East Pakistan in 1947, demanded that they be expatriated to Pakistan. Out of the nearly half a million refugees, Bhutto – the successor to Yahya Khan – only allowed 100,000 before his Sindhi constituency forced him to abandon the rest. The stranded Biharis live in refugee camps in Bangladesh till today. The issue of these abandoned Biharis further alienated the Mohajirs who had vigorously campaigned for them.

Bhutto, generally considered an enlightened statesman within Pakistan, was a closet Sindhi nationalist. Bowing to his native constituency, the Sindhis, he instituted urban-rural quotas that resulted in a precipitous decline in the number of jobs to which the predominantly urban Mohajirs were eligible.

After Bhutto’s execution, Pakistani politics was run by Zia-ul-Haq singly for about 10 years. Haq’s rule is legendary not only for his fateful decision to involve Pakistan in Afghanistan, but also for his full throttle Islamization that he unveiled to support the prior cause.

End of 1988 saw Benazir Bhutto being elected as the country’s first woman Prime Minister in a much feted election. The time period of course ties neatly with the ‘end of Afghan war’ and the reduced utility for US of a military regime in Pakistan. Bhutto, daughter of Z.A.Bhutto, rode to power with a coalition government that included MQM.

Post election, Benazir is widely alleged to have run one of the most corrupt regimes. Just to give you a flavor of the bankruptcy of the regime, Madam Bhutto appointed her mother, Nusrat, as a senior minister without portfolio and her father-in-law as chairman of the parliamentary public accounts committee. In addition, ever the Sindhi nationalist and eager to firm up her credentials there, she didn’t throw much rope to Mohajirs. The relationship quickly soured and MQM in turn found an ally in Nawaz Sharif’s Punjabi IJI.

It is important to note that this really proved a death knell in terms of Sindhi-Mohajir relations against what many saw was Punjabi dominance, especially post Zia, at the center. Bhutto oversaw the worst of rioting in Karachi in the mid 90s.
After moving through an interim prime minister, Sharif eventually came to power in 1997. He in turn was deposed by General Pervez Musharraf, a Mohajir, in 1999 – which brings us to nearly the end.

Most trace the ascent of Musharraf to the top in a Punjabi dominated military exactly because of his status as a Mohajir - the Punjabi military bosses promoted him for they felt that a Mohajir would never attempt, and much less succeed, in a coup d’etat.

Musharraf’s relations with the Mohajir community have been on warm terms but that has attracted the ire of nearly all others. The Karachi riots hence can be seen as a stage managed confrontation between PPP led Sindhis and MQM.

Sindh’s urban society was dominated by Hindus before 1947. The native Muslim population was primarily rural. The emigration of Hindus post partition left a vacuum which was filled by the educated Muslim immigrants from India. In the 1981 census, only 6% of the population identified themselves as Sindhi.

The relative affluence of the Mohajirs was always a rubbing point for the Sindhis.
Post 1971 war with India during which Bangladesh was created, nearly 100,000 Bihari Muslims who had migrated to Bangladesh during partition immigrated to Karachi. Another 300,000 Biharis were left stranded in Bangladesh in over 60 refugee camps as political will ran out and Bihari immigrants became a political liability in Sindh.

The Bihari immigrants who speak Urdu have traditionally been seen as part of the Mohajir community.

Then starting with 1980s, Afghan refugees starting pouring into Karachi as Afghan war got underway. The Afghan immigrants were widely alleged to have brought along with them the ‘drug and arms’ mafia and the number of small arms in city just ballooned as ethnic conflagrations became deadlier. The Afghans threw their weight politically behind the Punjabis, and the nexus worked effectively and to deadly effect in the riots in the mid 80s and then again in the mid-90s.

Urdu was instituted as the official national language at the inception of Pakistan even though only a pitifully small fraction of Pakistanis spoke the language. In the widely cited 1961 census results, it was reported that Urdu was the mother tongue of a mere 3.7% of all Pakistanis (7.5% in West Pakistan), and only 15% of West Pakistanis were able to speak Urdu at all.

Language has been a key issue in Pakistani politics. In fact one of the major rallying points for East Pakistanis was recognition of Bengali as one of the state languages. In Sindh, there was widespread resentment against Urdu. In 1972, Sindh province passed a resolution instituting Sindhi as the second official language. The act led to ‘language riots’ as Mohajirs, concerned about losing economic privilege that emanated from their ability to speak Urdu, rioted. Language riots are often seen as a turning point in the city’s history and the relation between Mohajirs and Sindhis.

This is Part I of a two series article. Click here to read the Part II.
Posted by Mayank Austen Soofi at 6:51 PM

I completely disagree with this statement, there was nothing to do with India in 1971, India came later to help, but it was Sk. Mujib and the people of Bangladesh who started to and make it possible of creation of Bangladesh.