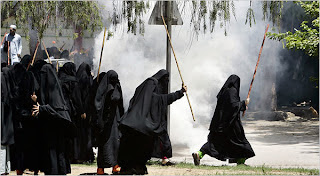 Mr. Musharraf’s government finally showed its belated courage in dealing with the fanatics.

Once again Pakistan’s detractors, and there are many, must be flailing their arms in disappointment. This was their latest fantasy. The firebrand mullahs of Islamabad’s troublesome Lal Masjid would defy the army siege and unleash their hundreds of promised suicide bombers into the capital’s green avenues to launch fiadyeen attacks. The hassled government would be forced to retort. The resultant massacre of the mullahs, telecast live on Geo TV, would enrage the pious Muslims throwing Pakistan into turmoil. President-General Pervez Musharraf would, hopefully, be assassinated or at least be toppled and the country would come down to its knees.

Alas, dreams are such unreliable stuff to bank on. On 3rd July, the country’s military-led government, outraged by mortar firing from the seminary’s students on its army rangers stationed outside, finally resolved to end the Lal Masjid embarrassment.

Since the beginning of 2007, the Lal Masjid students, both men and women, had repeatedly carried provocative acts like burning of movie DVDs and kidnapping of Chinese masseuses in the name of Islam. Till recently Mr. Musharraf dithered and trembled in his cowardice in dealing with the law-breakers but no more.

With apologies to the loved ones of the dead (21 people have been reported dead), the bloodbath remained severely circumscribed in its scope. More than 1200 ‘militant’ students surrendered, rather meekly. The burqa-clad women who were always seen threatening jehad while humiliating supposed prostitutes ended up merely as “chicks with sticks”, an apt term coined by columnist Irfan Husain. The chief mullah Maulana Abdul Aziz who fancied Prophet Muhammad personally ordering him to raise the sword of revolt was himself caught fleeing in a burqa! Only recently the poor man had termed the practice of men shaking hands with women as unIslamic.

At the time of writing a few students, supposedly the hardened variety, were still cloistered inside. They too would be flushed out.

By now we have discovered just why burqa remains so popular among the bearded conservatives. There are more lessons to be learnt though. Strong determination and assertive action by the authority usually weakens the courage of unreasonable fanatical conservatives. Mr. Musharraf and all his opponents, which include the nation’s future rulers, must note down this useful truth.

The belief of this website that mullahs must recite azaans and madrasas should exist for education alone was further crystallized when a taxi driver whose two nieces were trapped inside the besieged seminary said, “We sent our daughters for education, not terrorism.” A short, simple, strong, and a stirring statement needing no further elaboration!

Lal Masjid farce is over but these are no times for celebrations. We realize many battles lie ahead in the struggle against religious blackmailing. Still, we must have faith in the country's strong in-built system capable of surviving and overcoming various fault lines. Pakistan would conquer all the battles and win the war too. The dreaming detractors are wasting their time. Pakistan Paindabad.
Posted by Mayank Austen Soofi at 3:13 AM