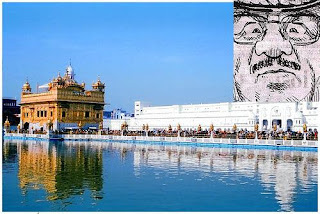 Lal Masjid farce is over but it could have devastating results.
[By Mayank Austen Soofi]

Not far from Lahore, across the international border at Wagah, in the Indian town of Amritsar shines the Sikh holy shrine of Golden Temple. More than twenty years ago, a bearded fundamentalist had established himself there. He would use the temple as a base to spread his virulent version of religious bigotry.

Just as General Pervez Musharraf, as well as his predecessors, backed the Lal Masjid mullahs all these years to strengthen their respective dictatorial regimes, that bearded fundamentalist in the Golden temple too was initially supported by a powerful Prime Minister - Mrs. Indira Gandhi, democratic India's first dictator. Just as Mr. Musharraf would later do, she too sent her army into the holy hideout to finish off her former ally once he became an all-destroying Frankenstein. Just like Abdul Rashid Ghazi, Jarnail Singh Bhidnranwale too was killed. All that had happened on June, 1984 when General Zia-ul-Haq and the intelligence agency ISI were actively building close relationships with the mullahs of Lal Masjid.

As it happened, Operation Blue Star, the bloody assault by the Indian army on the Golden temple to flush out Sikh terrorists, turned out to be a complete success. Around 492 terrorists were killed. But its consequences were devastating. Within five months Mrs. Gandhi was dead; murdered by her Sikh bodyguards. In the ensuing decade, India's soul was irreversibly scarred as it battled the atrocities of Sikh terrorism that took thousands of innocent lives.

Now let's fast forward to 2007. Operation Silence, the bloody assault by Pakistani rangers on the Lal Masjid to flush out Islamic terrorists, has also been a success. Around 160 terrorists were killed. But the consequences could be equally devastating.

Would Mr. Musharraf and his supporters realize that the past has a frustrating habit of repeating itself in the future? Be it Amritsar or Islamabad; Mr. Bhindranwale or Mr. Ghazi; Sikh terrorism or Islamic terrorism; bullet-scarred Golden Temple or bullet-scarred Lal Masjid; Operation Blue Star or Operation Silence; Indira Gandhi or Pervez Musharraf; assassination…and another assassination?

However, it is not only Mr. Musharraf who is living on borrowed time. His actions have dumped Pakistan too in a delicate situation. Every minute of his continuation as the country's President could bring more chaos and tragedy to the nation.

The hard fact is that Mr. Musharraf is ruling this country as his own man since the 1999 coup and has failed spectacularly in all the fancy posts he glowed in - that of CEO, General and President. He could not weed out corruption as promised. He was never interested in bringing genuine democracy. He exiled a Prime Minister, forced a President to resign, and dismissed a Chief Justice. Most importantly, he could not free Pakistan from Islamic terrorists. That the Lal Masjid farce went on dangerously for all these years is a clear proof of his willful incompetence in dealing with religious extremism. What Mr. Musharraf really achieved was to bring disrepute to the fair name of his army, once the country's only holy cow. But enough is enough now. The dictator must abdicate - for his sake and for Pakistan's.
Posted by Mayank Austen Soofi at 11:26 PM

Musharraf seems to be the biggest problem now but his abdication is not the solution. The military-mullah alliance dates back many years, and it is this alliance that needs to be weakened. The military must take a back seat and something tells me they won’t do it voluntarily. Are there any forces in the country that can put the armed forces in their place? Certainly not the political parties because every now and then they keep running back to the military for help. Perhaps the judiciary can play a positive role in curtailing the military’s might. The Chief Justice has set a good example, which if followed might become Pakistan’s saving grace.

The oft cited military-mullah axis is nothing but a reflection of the overall Islamic roots of the Pakistan's society. These roots go beyond ritual and into the higher planes of and believe - out of which flow the worldy actions of the believers.

Military men, be a sentry or a general come from the same society and the mutual affinity between these two spheres of Pakistan's society is anything but natural. This is more so because a sizeable number of people who used to get enrolled in Pakistan Army consider it a dual-benefit exercise - a good carrier and a devine cause whenever times come for the same. This might not be case in modern times due to the extra ordinary worldly benefits associated with Pakistan Army especially if you are nearing your service term.

>>>That the Lal Masjid farce went on dangerously for all these years is a clear proof of his willful incompetence in dealing with religious extremism.

i think it just proves that incompetence had (has?) nothing to do with it. jarnail saab (this live one, not the dead bhindranwale) is playing out his puppet mastered role, well... not quite to perfection, but certainly to the satisfaction of imperial grand designers who always prefer pakistan to remain an unstable cesspool of internecine religious/sectarian violence.

and yes he will probably be sacrificed soon enough, as he outlives his usefulness as imperial point man.

When comparing Lal Masjid to the Operation bluestar I don't know on what comparisons other than the below mentioned reasons Indian Media and Indian people in general compare ;-
1.Both Lal Masjid and Golden temple were place of worship.
2. Both of them were directed against one man in particular.

The similarities stop there only. That's it? Indian media and Indian people has nothing more to offer.

I have not much information on the Lal Masjid attack and also on Abdul Rashid. But talking about Operation bluestar I ask you few questions:-
1. Do you know for what Jarnail Singh Bhidranwale stood for?
2. Why Operation Bluestar was launched on the martydom of Guru Arjan Dev ? Was it a delibrate attmept of the Indian establishment to kill Sikhs?
3. Where is the proof the Jarnail Singh Bhindranwale indulged in killing of Hindus? No, the Indian media and Indians have no such proof. This clearly shows the attitude of Indians towards other minorities living in India. Indian government never cares for its minorities and this has been proved time again and again.
4. Many pilgrimages were killed by Indian Army with their hands tied at the back , you have the eye-witness account for it.
5. Why Punjab was cut-off from rest of the world during operation blusetar?
6. Why was all the foreign journalist were thrown out of Punjab during operation bluestar and whole of Punjab's telephone lines, railways, roads were cut-off or in other words Punjab was under house arrest?

Comparisons are always dangerous since two events are never completely identical. The major difference between these two events is that Sikhs are a minority in India whereas Muslims are the majority in Pakistan. Your article talks about the sufferings Indians endured due to Sikh Terrorism and completely ignores the Anti Sikh Riots, Racial profiling, Government sponsored anti sikh events, etc. that the minority Sikh community had to endure through out this period. Your opinions on the Indian event are completely biased probably due to your ignorance of the facts. Never the less, I do agree with your assertion that those who play with fire do usually face terrible repurcussions.