Azaadi at 60 – We the Pakistanis 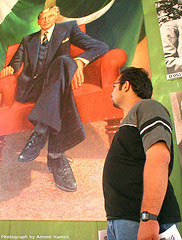 [Text and picture by Ameer Hamza, a freelance photojournalist whose works have appeared in newspapers like Dawn and The Friday Times.]

Freedom came to us at midnight, a time when people are supposed to be sleeping. And it was the night between 14 and 15th August, 1947. But historical facts can be murkier. For one, the Mountbattens were in Pakistan on 14th for the assembly and announcement. So the actual freedom was on 14th. Some historians don't agree. But Pakistan lives on and it marks its independence ahead of its arch political rival,
India.

But freedom can be a dangerous thing for millions, if thrown away like that. Fortunately, Pakistan did not get freedom just for nothing. Many lost their lives. Many lives turned into horrible mess, thanks in part to the British idea of speedy independence. And yet, today we do not really realize the importance of national freedom. Ask Palestinians about it. They might be able to tell you what it means to be free as a nation.

14th August is here for the 60th time. And in these years what have we achieved? This is the question which is being asked not only nationally but also internationally. Being the sole nuclear Muslim country with a proverbial Islamic bomb in hand, world looks pretty anxious on our birthday. Some, like the neocons in Washington, perhaps do not want to see us alive for 61st Birthday. Others would like us to live long, like China. But what do we the Pakistanis want?

The question is daunting as much as it is philosophical in nature. For one, we would want to have freedom of expression - not permission to dance nude in beaches, but freedom from Wahabi Islam; freedom from people who blow our Muslim brothers and sisters in the name of Islam. We would like to free ourselves from the hold of psuedo-Talibans like Qazi Hussain and Fazal (Mulana Diesel), and their cohorts. We would like to see our army defending our borders and not building bank balances (which it seems to be doing presently).

We would surely want our tribal areas to become more humane, more accepting, and friendlier. We would like to see our sisters and daughters educated, so they are free from the clutches of often illiterate husbands and fathers. We would love to see free trade with India. After all, why should we buy Indian goods from Saudi Arabia or Dubai?

There are many other things we would want. Naming them all would not be possible here. In short, I, as a Muslim and as a Pakistani, would like to see Hindus, Christians, Zoroastrians, and other religious minorities to be treated as equal citizens. We don't want burned churches, blown up temples, and killed clerics. We don't want bloodshed. We've already have had our fair share of such happenings. Being a pure-blooded Karachite, I know the price of blood.

We want a peaceful, powerful, independent, sure-footed Pakistan. Not the moth-eaten one we had at midnight some 60 years ago.

[Written by Ameer Hamza. All rights reserved. Only for Pakistan Paindabad. No commercial use.]
Posted by Mayank Austen Soofi at 9:50 AM

Is it easy for us to critique being on the outside, I wonder what it is actually like there.

Give rights to people of all religions , become tolerant.Punjabis should stop suppressing Sindhi and Baluchi people and recognise their rights and their land. Do this and see what Pakistan becomes.

its easy to criticise the government. i am not avid fan of musharaf or any politician...all i am trying to say is that we have to stop being critical and start doing something useful ourselves. as for me, i have pledged to help as many girls as possible in getting their education. I am sure there's an issue close to ur heart and you can play a role too.

I commend you wanting equal rights for people from other religions in Pakistan,but you are probably in the minority within the Muslim community.