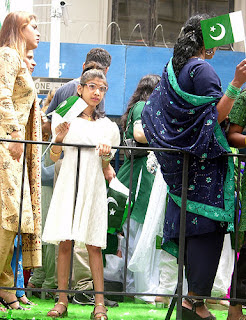 Making sense of our Pakistani identity.

[By Maryam Arif, she hails from Lahore; picture by Zadignose]

As Pakistanis we constantly struggle with the contradictions of religion and culture. Culturally we share much in common with Indians, religiously we feel bound to Afghanistan. Too many ironies lurk in our daily lives. We read Arabic without understanding it; we speak Hindi without being able to read or write it.

In his latest film, Khuda Ke Liye, acclaimed director Shoaib Mansur does a good job of bringing these tensions to light. My favorite scene takes place in a court where the actor Naseeruddin Shah, preaching tolerance and rational thinking, says, "Din mein darhi hai, darhi mein din nahi." (Beard is part of the religion; the religion is not in a beard). Also, on the question of dress in Islam, he points out that what one wears depends on one's socio-economic status and one's location on the globe. For instance, it wouldn't be fair to expect a Muslim convert in the North Pole to wear an ankle-high shalwar. Sensible indeed!

I congratulate Shoaib Mansur on reviving Pakistani cinema. An original work of art, his film comes out at a time when many of us are struggling with what it means to be a Muslim in Pakistan. Is music haram or halaal? Every second house has a youngster who plays an instrument or sings. Underground bands are growing by the day. More and more Pakistani singers are making their way up to the top charts in India. In case if the music is indeed haram, then are all these people not good Muslims?

Are we becoming a nation of non-believers? Quite unbelievable - even the leftists in this country offer the Friday prayers!

I see the ideological contradictions in my own family. My mother is a communist, Gandhian, and an atheist – all in one. Yet, she has a religious corner in her room where she keeps a shrine - complete with an idol of Krishna playing the flute, puja thali and all. There is Jesus, Sikh gurus, Buddha, Khana Ka'aba, Kaali and even a miniature Taj Mahal. But she happens to be born in a Muslim family!

When I recently fell sick, my mother's instinctive reaction was to blame the evil eye. Before I could take any medication, she performed the "damm" on me, which made for an interesting spectacle indeed. With her head uncovered and hands that smelled of cigarette smoke, she mumbled something that I assumed to be Quranic verses.

Her furious invocation followed her belief that her daughter had become a victim of the evil eye. To get rid of it, an egg and some peppers were summoned from the kitchen. After rotating the edibles over my head, the egg was left on the roadside and the peppers burned on the kitchen stove. These are the doings of my sweet mother who claims to be an atheist.

My mother is not unique. Like most Pakistanis, she too is a person enjoying interesting complications borne out of influences ranging from our multi-faith history, moderate Islam, modern trends, ancient traditions, to our nation’s turbulent politics – all mish-mashed together in a fantastic combo meal. It won’t be an exaggeration to say that there are several Pakistans inside each Pakistani.

I think we Pakistanis have our own Identity. Urdu can never be compared to hindi. Hindi is the idian name given to the Urdu language spoken in India.

The various issues that were raised in KKL are worth praising. It depicts we Pakistanis as a nation are unfortunately confused.

I am an Indian. Having met many, many Pakistanis over three decades, it had always been clear to me that our temperament, broad culture - language and diet, what makes us laugh, sad or angry and family values are similar. It does pain me, however, to note that quite a few Pakistanis, particularly the educated ones, do not wish to acknowledge this similarity. Perhaps,60 years after partition, Pakistanis are now secure and mature enough to find the common historical and cultural roots that bind Pakistan to the sub-continent rather than to Afghanistan or Arabia. Ethnicity and culture cannot be so easily subordinated to religion - especailly, when culture tends to have very deep roots in time and history.

There shouldnt be any shame to accept our cultural and historical links to subcontinent,middle east and central asia,and that is what makes us unique in the world.we have turkey,malaysia and some othercountries anjoying such status.We truely are a link between far eastand the fertile crescent.

Being an indian we understand the the riddle.India shares religious similarities with almost all south asian countries(from thailand all the way to vietnam, cambodia ..) , buddhism being so similar to hinduism(i think the differences are only cosmetic) but that where the similarities end.Culturally we have absolutely no commonalities and we share everything culturally with pakistan even though there are few similarities religion wise.
I think for indians culture trumps religions every which way.

i agree with krishna , the ancesters of pakistanis were hindu, and they developed a distict ''indian''culture.Islam is not a totalitarian religion, it is one of many in the indian subcontinent which has many muslims living in all parts of it.I do not feel tht pakistan should an extension of afghanistan or Arabia, they cannot understand our language, urdu/hindi, nor can they even read either. educated pakistanis dont acknowledge similarities bcoz of national pride.

Follow up comment... urdu/hindi (the language which is most widely understood in pakistan/india is a mixture of the language hindus spoke before and language of invaders who brought mainly islam. Therefore it would be silly for people on either side of the border to discount this part of their culture. Muslims have always been the largest minority in india aswell.. the similarity between pk and india is proof enough....