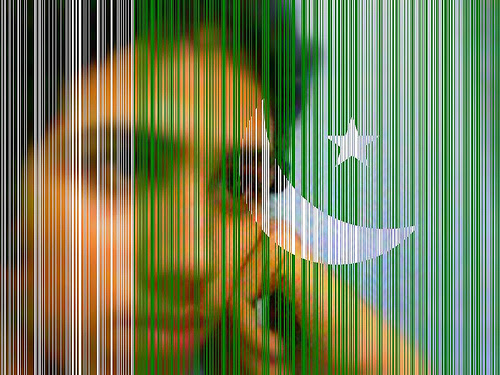 Exposing the anti-Muslim attitude of Indian writers like Ramachandra Guha.

On August 15, 2007, presumably to mark India's 60th birthday, the New York Times published an op-ed by Ramachandra Guha, a prominent Indian author. Titled India's Internal Partition, the article appeared to be a promising examination of Hindu-Muslim relations in India. Mr. Guha began with the events of 1990.

Bharatiya Janata Party leader Lal Krishna Advani journeyed for five weeks between Somnath and Ayodhya, making fiery speeches at towns and villages en route, denouncing the Indian government for "appeasing" the Muslims. In many places Mr. Advani visited, attacks on Muslims followed. In New Delhi, where I then lived, Mr. Advani's march represented a grave threat to the inclusive, plural, secular and democratic idea of India.

In his article, Mr. Guha is quick to invoke his Muslim friendly credentials by recalling his friendship with a Pakistani economist called Tariq Banuri. The latter was apparently the first Muslim Mr. Guha ever became "close" with. He also had dreams about Mr. Banuri during the Ayodhya crisis. Alas, the friendship did not leave any discernible positive residue.

When discussing Muslims in India, Mr. Guha states the oft-invoked trope that Muslims don't do anything but films, saying "but in law, medicine, business and the upper echelons of public service, Hindus dominated." An objective editorial about India's "internal" partition might have inquired why Muslims in India do not make it to the "upper-echelons" of Indian society. But why would Mr. Guha waste time with trivialities? After all, on the 60th anniversary of India , there is plenty of Pakistan bashing to be had. It comes soon enough.

As usual with prominent Indian intellectuals who are unable to accept that Indian Muslims are Indian and Pakistani Muslims are Pakistanis (and not Indians), Mr. Guha calls in Pakistan in this edit on India's Muslims. He recalls his visit to Badshahi Mosque in Lahore.

It was Friday evening, and a large crowd of worshipers was coming out after the weekly prayers. Walking against the flow, I had to jostle my way through.

As I bumped into one worshiper, I was seized by panic. In one pocket of my kurta lay my wallet; in the other, an exquisite little statue of the Hindu god Ganesh, dancing. I am not a believer, but this was my mascot, a gift from my sister, carried whenever I was separated from my wife and little children. What if it now fell out and was seized upon by the crowd? How would that turn out — an infidel discovered in a Muslim shrine, an Indian visitor illegally in Lahore?

Note the use of the terms "infidel" and "panic" and "seized upon by the crowd" (as if all Muslims crowd act as one). The term "shrine" is used to describe a mosque.

The fact is Mr. Guha is unwilling to accept that when he was in Pakistan, no one cared he was a Hindu, or had a dancing god in his pocket, or that he was from the upper-echelons of Indian society. In India, by virtue of being Hindu, he'd at least have been able to feel better than Indian Muslims. In Pakistan, deprived of recognition, and in desperate need for it, he resorted to a simpleton's victimization-complex.

As expected, Mr. Guha ends by predicting war between India and Pakistan.

Despite their shared culture, cuisine and love for the game of cricket, India and Pakistan have already fought four wars. And judging by the number of troops on their borders and the missiles and nuclear weapons to back them, they seem prepared to fight a fifth.

Mr. Guha has selective eyes. He sees only what he wants to see. There is no mention of the peace-initiatives initiated by President Musharraf; nothing on the cricket-diplomacy conducted over the last seven years (during which time Indian visitors were celebrated by Karachites and Lahoris).Mr. Guha ignores that there hasn't been any saber-rattling between India and Pakistan since a long time.

It is the anti-Muslim attitude of intellectuals like Mr. Guha which leads to enmity between Hindu and Muslim; and between Pakistan and India. India's Internal Partition reveals more about why Pakistan was necessary, and a good idea, than casting any positive impression of India.

[An earlier version of this article appeared at Jahane Rumi.]
Posted by Mayank Austen Soofi at 11:05 AM

The Line of Beauty said...

I fail to see the logic behind Mr Ali's conclusion that the article written by Ramchandra Guha is Anti Muslim. Is he anti muslim beacause he does not discuss India's "Internal" matters or because Mr Guha 'discusses' Pakistan. Allow me to say, weather people from pakistan like it or not, whenever we discuss India's independence, partitions can not be brushed under the carpet or the reasons why it pas partitioned.
How does a person become Anti-Muslim if he does not have any muslim amongst his 'close' friends??

Mr Guha is entitled to his opinion where he says muslims have done well only in films, which is not correct at all. But, that does not make him anti-muslim. I am not an authority on the subject but I can name people like Salman Haider, Ajeem Premji, A.P.J Abdul Kalaam, A.M Ahmadi, Md. Azahrudden who despite being muslim did very well in their field. ( can Pakistan ever think of making a Hindu or Non- muslim to head it's nuclear or missile program ??)

Now, regarding the last point where Mr. Guha is labelled an Anti Muslim because he chose words like 'panic' and 'seized upon' to express his feelings, isn't this not reading too much between th lines.

And lastly, The fact is Mr. Guha is unwilling to accept that when he was in Pakistan, no one cared he was a Hindu, or had a dancing god in his pocket, or that he was from the upper-echelons of Indian society Presumably, Mr Guha was not wandering the streets of Lahore In a Dhoti-Kurta with a 'tilak' mark on his forehead to feel out of place. And did no one care?? As far as reports In Indian media go, from which I form my opinion as i have yet to visit Pakistan: Pakistani's are very welcome and hospitable them moment they get to know you have arrived from India.Taxi drivers refuse to take fare, shop owners start giving discounts, and every one warms up to you.

Mr Ali, though suffering himself from selective perception, accuse others of the same. hasn't he read too much in the lines where ".... they seem prepared to fight a fifth. " Just because there has not been any sabre rattling in the past, is it safe to assume that we can't have a war. Surely, with 4.5% of GDP spent on army, pakistani establishment is not spending this money to prepare for finding out Osama's hideout. It takes two to tango, India is equally responsible in this arms race, but spare Mr. Guha for being responsible for this

What the Pakistani chauvinist who wrote this piece is unable to understand that no Pakistani set upon Mr. Guha because the Ganesha idol did not fall out from his pocket. If it had then things would have been difficult.

I disagree that Guha's article is anti-muslim. That being said, Guha is an idiot and a terrible, pompous writer. Pomposity is something that plagues many Indian writers.

Just went trough this article and I think we should not talk about General Musharaf's peace initiative, as from indian point of view he is not a person to be trusted as he was the mastermind behind Kargil as Vajpaee tried to initiate peace.
M not Anti Pakistan but Mush is not a person India would trust.

I wonder how it would have been if he had taken that idol out of his pocket (as long as it is in pocket, it is invisible to others). What if he had taken out that idol, kept it somewhere in public place and started worshipping in middle of others for a while. Would people stop him? I don't know.

Would people laugh at him for worshipping idol? Very likely.

I think this whole issue is just plain silly. Why would anyone beat that guy up if a ganesh idol fell out of his pocket. Would the indian public beat me up if I have Allah around my neck.
does anyone( from India) want to talk about babri mosque or anything......
Does anyone (from Pakistan) want to talk about the saggrigation of minorities......
India and pakistan are both equally evil in mistreating minorities.
Talking of Azharuddin or kalam does not mean that muslims are treated really well in India and you know that. Similarly talking of Justice Bhagwaan das and kaneria does not mean pakistan is great with the hindu minority either...
we all should be ashamed of ourselves.

I fail to see how Mr. guha's article is Anti Pakistan. For your information, author is thie piece, people who are in any way different (faith, colour or ethnicity) DO feel threatened. Pls. get off your jingoistic high horse and try to see things differently instead of reading every word and twisting it. You think Mr. Guha is anti Pakistan? take a look at some of your own media persons who are so bltantly anti Hindu that they would have felt right at home in th SS.

When discussing Muslims in India, Mr. Guha states the oft-invoked trope that Muslims don't do anything but films, saying "but in law, medicine, business and the upper echelons of public service, Hindus dominated." An objective editorial about India's "internal" partition might have inquired why Muslims in India do not make it to the "upper-echelons" of Indian society.

So typical of Pakistanis to assume that Muslims are secretly being conspired against, or held back by the hindus.

Another stupid comment by a Pakistani once asked, 'Why have there not been any Muslim Amry heads in India'.

Here's an open challenege if u have the guts to accept the truth. Find any indian muslim who says he was denied education or held back in promotions because he was a muslim. You will not be ale to find EVEN ONE.

If you talk to Indian muslims you will realize what a false belief you are living under (and which is so convenient for you to assume). They have much better living conditions and enjoy more freedom (in Indian Islamic Laws) than even Pakistani muslims.

-> Since the separation, the Population of Muslims in India has risen to 25%. While in pakistan it has reduced from 25% to 2%.

If you read in wikipedia, you will find that they were mercilessly killed. Hindu girls were kidnapped and forced to marry muslim men. Hindu women were also kidnapped.

On what lines can you compare the 'open mindedness' and secularism of India with Pakistan.

You always speak of Advani and Modi as starting anti-muslim movements in India and instigating hatred. Although that is true and I condemn it with my heart (and that is why they lost this current elections), what about people in your own country?

If in India you can name 10 such people, I can name a 100 in Pakistan. And the thing about peace talks being initiated by Musharraf are laughable. What about the foolish attack he made on India just before that?

I tend to think it is you who is being selective and utterly biased in what you want to see.