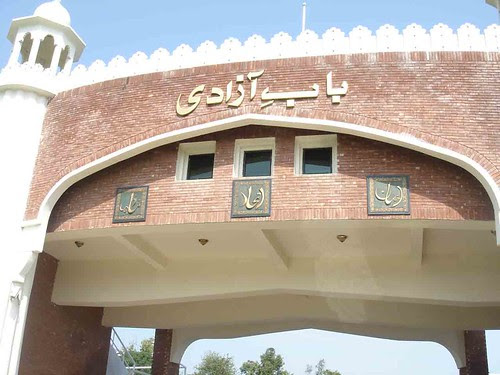 Watching the flag-lowering ceremony in the Pakistan-India border at Wagah is entertaining. Thousands of people attend the evening spectacle.

No one is disappointed. The performance is thrilling. The military regiments on both sides co-ordinate their actions in perfect symmetry. Soldiers stamp their foot on the ground with attitude. Marching commands are barked out like wounded warriors.

Of course, the hostility and the aggressive mood is all unreal. Just for the show. Most Pakistanis know it. Most Indians don’t.

I recently attended one such ceremony from the Indian side of the international border. There were at least a thousand Indians – tourists, students, and families from nearby towns and villages. The crowd in Pakistan was a little less.

While waiting for the flag ceremony to start, a Pakistan Tourism bus, carrying (presumably) Pakistani passengers from Delhi to Lahore, drove its way through the crowd. Proud Indians displayed their patriotism by teasing the bus passengers with taunts of “Aatankwaad band karo” (stop terrorism). The passengers, in turn, looked bewildered - like lambs flung inside a lion’s cage.

Surely not the best of Indian hospitality was on display that day.

We don’t know how Pakistanis would have responded to a bus carrying Indians to Delhi. Yet, they were the politer audience. They were less noisy, laughed more, and clapped most of the time. As if it was a picnic game. Indians, in contrast, took their nationhood a little seriously. Besides, there was contempt in their gestures. They looked angry and their rage was real. Unease lingered in the air as they waved the tricolor flag. It could have been a cuntdown to war.

The kind of songs playing on both sides strengthened the perception of Pakistanis being cooler than Indians.

The public address system in India played patriotic hits from Bollywood war films. The songs boasted how great the country is compared to its enemy and so on. In contrast, Pakistanis were swaying to contemporary Urdu pop chartbusters. Their lyrics had feel-good phrases like “healing the divides” and “hands of friendship”. Compared to the cantonment mood of Indians, Pakistanis were behaving as if they were in a concert.

Perhaps Pakistanis have a happier spirit. They remained easy going, tolerant, and smiling throughout the evening. Indians, alas, played a spoiler with their sourness. Clearly, as far as Wagah border is concerned, it is sexy to be a Pakistani than an Indian. 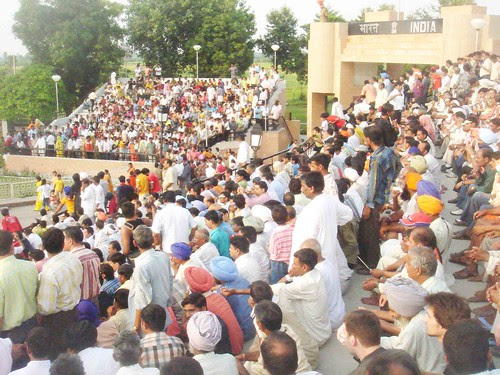 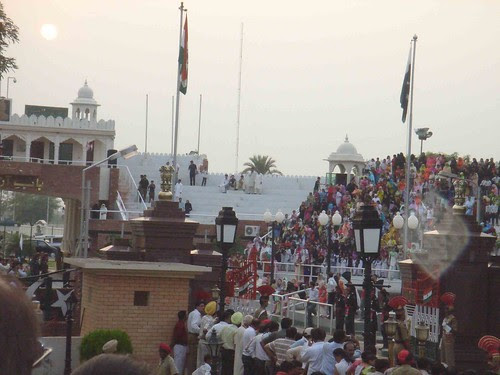 Lambs in the Bus 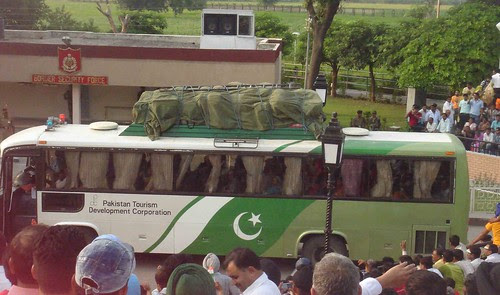 Can You See Pakistan? 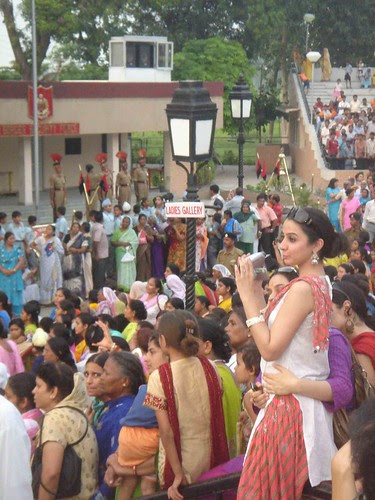 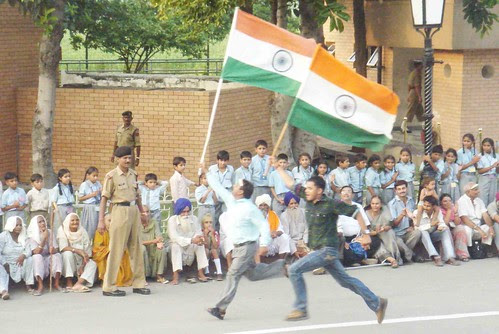 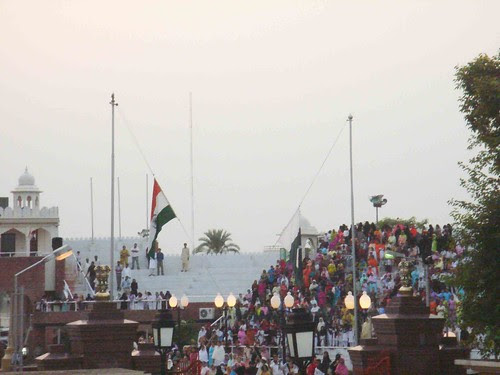 Why u think holding Indian flgs i shateful?

i totally agree with veela... why do you think holding india flag is hateful? pakistan has been sponsering those idiot jehadis to harm india. i have heard you right great things about pakistan and am not against it ,i too have a lot of pakistani friends but just for the fact you cannot ignore the many terror camps pakistan is running to destroy india...

Younger generation of India and Pakistan will change these mere political shows.

Get to the point. Pakistanis (Read statements from their spokesmen and think tanks) insist that they use terrorism to help Kashmiris regain freedom. LET's lead terrorist Hafiz Saeed says he wants to plant a green flag in New Delhi. Pakistan intiated all wars against India including the Kargil war planned while Indian PM AB Vajpayee was in Lahore extending a hand of friendship and peace. What do you say to this?

Pakistan already controls 2/3rd of the Kashmir Valley, so then why the wars? Why the poison and hatred from them if they already have what they are asking for? Jammu is a Hindu majority area and Ladakh a Buddhist (80%) dominated one.

What should India and Indians do when Pakistan day after day finances, trains arms, and pushes in terrorists under cover from artillery? Why do terrorists come to India from Pakistan? To spread love? Or to shed the blood of innocent civilians in temples, masjids, shopping centers etc.

You are therefore either a Pakistani or an Ostrich - in either case a loser!!

"The kind of songs playing on both sides strengthened the perception of Pakistanis being cooler than Indians."

Ummm, interesting. I wonder which songs were they? I was under the impression that Pakistan dances on bollywood songs.

i'm an indian. let me begin by apologising on part of those indians whom you saw that day at wagah border, who shouted at the bus.my sincere apologies. i'm not proud of such behaviour and trust me many people in my country would not have been.i'm also sure, many people in that croud would also not have been proud, just that you missed them, because they were not vocal enough...but your post hurts me when you generalise such behaviour on all indians.and probably that is the reason why you got those not so friendly comments too. i mean do we really beleive that all indians hate pakistan?do we honestly beleive all pakistanis are terrorists? do we honestly beleive all pakistani would agree to what mr.hafeez saeed says? I DONT THINK SO...maybe at the heat of the moment, we all get carried away.just like some indians got carried away and behaved irresposibly that day on wagah,similarly a few pakistanis may get carried away when they hear highly emotive speeches of people like mr. hafeez saeed. it is said, hitler made great speeches and that was his success. but that does not mean germans approved of his conduct....please friends think before you present yourselves.our actions mean a lot to people across the border

Though I deeply believe in the message of love & share similar thoughts on India-Pak relations as you Mayank. My experience of Wagah was quite different. Aggression was on display from both the sides. Indians chanted "bharat mata ki jaya" whereas the Pakistanis switched between "Pakistan Zindabad" & "Allah-hu-Akbar". The atmosphere is quite electrifying as you mentioned.

Guys, chill out. Austen you should be aware that Wagah border is in Punjab, people there are more agressive and as mentioned by Bina in one of her articles on humor, get pleasure out of humiliating someone. If you would go a bit east, or south (of Punjab) to include other states of India, M.P., Gujarat, Maharashtra, A.P., Tamilnadu etc. the reactions will not be the same as you saw that day.
India is more diverse, Punjabis can identify with Pakistanis but not all Indians will.
Just to add, praise Pakistan, but if you do feel ashamed of people carrying the Indian flag, then better go to the other side, you'll have company there.

I agree with linusys .....I've been there 4 times and had similar experience as linusys ....atmosphere on both sides was electifying and both groups were supporting their chanting slogans in favour of their own countries....(and why not....)........However, regarding your comments about slogans on terrorism.....I don't agree....coz ....whenever i've been there, I've always noticed that BSF advises citizens not to speak anything against Pakistan....No doubt I am a True Indian Citizen, however, I also like our neighbours (PAK)....Folks...let's not discuss Kashmir here....let's leave Kashmir for Politicians and Bureacrats....they discuss it to get votes during polls...we are common Citizens of our countries...let the youth of both countries get together and show our politicians that we want peace ....not war.......

....One more thing MAYANK...I understand that you like Pakistan....however, Your comments are ANTI-INDIAN..... PLEASE DON'T FORGET THAT WE LOVE OUR COUNTRY AS MUCH AS PAKISTANIS DO....(nothing against Pakistan ..pls.) :-)

The statement "Mother India' hateful sons" is offensive.I stay in Miami Florida and here Indians and Pakistanis stay together as a family.Pakistanis from smaller towns are very much religious and sometimes they would only wish to mingle with Indian Muslims but this particular piece shows India Hatred.I personally feel that borders and religion cannot divide people

Those who ask about Pakistani crowds being cooler than indians should only see the cricket matches of Ind vs Pak
when played in these 2 nations... You very well will find the difference in how our Pakistani spectators cheer and appreciate good play versus how your indian spectators who can't stomach anything... how they throw bottles in the ground when they start to lose... there have been numerous cases like this so no need to remind u individual instances... and for vivek who said that either the author is a Pakistani or an Ostrich and that either way he was a loser... well, the loser seems to be you vivek and all the indians who think like u... Peace... Pakistan Zindabad... Pakistanis Paindabad!

p.s. at Wagah they only play patriotic Pakistani songs not bollywood aka copycatwood songs

"p.s at Wagah they only play patriotic Pakistani songs not bollywood aka copycatwood songs"

This is because Bollywood does not compose patriotic Pakistani songs aka "Habibi, Habibi...."

You're full of shit! true colors indeed! Why the hell don't you get the eff out of India and set shop in Lahore?? Paki's are considered to be aggressive; Indians are meek people... get a reality or a sanity check! I could punch your living day lights out for being a traitor~ alas... the dont have hit'ernet"!!!