Time Out Karachi - Sunbathing in the Metropolis 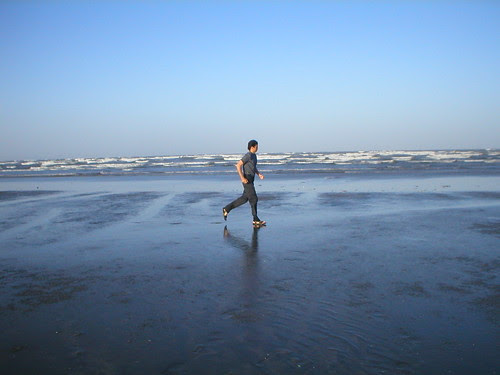 Imagine Karachi without its beaches?

[Text and picture by Ameer Hamza, a freelance photojournalist whose works have appeared in newspapers like Dawn and The Friday Times; the picture was taken on Paradise Point]

The coastline of Pakistan stretches from Baluchistan to the Runn of Kutch. Apart from being popular for rare green turtles, the coastline is also known for the wonderful diversity of its landscape. The coast has contrasting characters at different places - sandy and smooth, rocky and dangerous.

Karachi, being a big and horizontal city, has all sorts of beaches within its ever expanding borders. There are those popular spots where every one likes to visit, like Paradise Point, Hawksbay and Sea View. Then there are others frequented by few. Like the Pir Shams island. Russian Beach behind the Steel Mill of Pakistan has its own story.

Hawksbay and Sandspit are full with people on Sundays while the adjoining French beach gives a deserted look as only the select elite can visit it. All three are sandy beaches without the presence of much rocks beneath the surface.

Sandspit is now a non-descript beach except for the green turtles who come to lay their beautiful eggs there.

Sea view, like Sandspit, is extremely polluted and not fit for any sort of swimming or diving. And yet, through the week, it is full with people wanting to jog or to simply seek solace. Many a times I have seen solitary joggers sprinting across the sea-line. Some come almost daily, the pollution notwithstanding.

But you prefer a solitary place? Head to the Russian beach then. It is less crowded and less polluted than other beaches of Karachi. It also has boats which you can hire on hourly basis. Don't miss the stunning views to be seen from a mazaar on a nearby hill.

There is an interesting story why Russian Beach is called by this name. A steel mill was built next to it by the Russians. Many of them who worked here would later do sunbathing at this beach. This was during the 70s when the city was still not talibanized. Times have changed now and there are no sunbathers.

Another unknown beach is the jazeera of Pir Shams. It is an inhabited (population - approx. 5000) but extremely poor island. No drinking water. No electricity. And no jobs. But there is enough of seafood. The popular delicacy available is crab. But aviod eating it during summers as crab tends to be 'hot'.

Gadani and Manora were once popular haunts but their brackish water can be quite filthy. While Manora still retain some regulars, they both have clearly lost out to other beaches. Gadani, of course, was famed for its ship breaking yards. The industry there was the biggest of its kind in the world. Due to the lack of government support the ship-breaking industry is now choking to death. Gadani has become a pale shadow of itself. I have not been there since years.

However, the most photogenic beach of Karachi, in my humble opinion, is the one that borders Baluchistan. It has various names. You may call it Paradise Point. Unfortunately, Pakistan Navy has closed down that stretch of beach for no apparent reason. But you can still view it from the Sind part of the beach. That stretch of land is called Golden Beach. And photographs will tell you why.

[Written by Ameer Hamza. All rights reserved. Only for Pakistan Paindabad. No commercial use.]
Posted by Mayank Austen Soofi at 7:19 PM

Maynak, this is Sea view in the photograph not the Paradise Point. - Ameer Hamza.