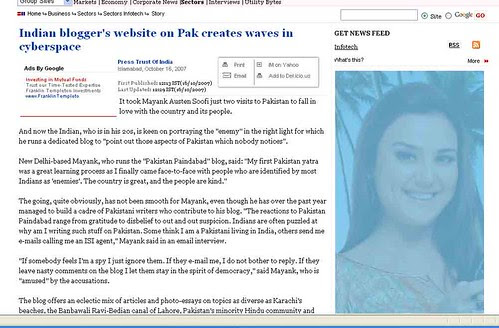 Pakistan Paindabad is being noticed.

[Report by Rezaul Hasan Laskar; the author is a PTI correspondent in Islamabad]

It took Mayank Austen Soofi just two visits to Pakistan to fall in love with the country and its people.

And now the Indian, who is in his 20s, is keen on portraying the "enemy" in the right light for which he runs a dedicated blog to "point out those aspects of Pakistan which nobody notices".

New Delhi-based Mayank, who runs the "Pakistan Paindabad" blog, said: "My first Pakistan yatra was a great learning process as I finally came face-to-face with people who are identified by most Indians as 'enemies'. The country is great, and the people are kind."

The going, quite obviously, has not been smooth for Mayank, even though he has over the past year managed to build a cadre of Pakistani writers who contribute to his blog. "The reactions to Pakistan Paindabad range from gratitude to disbelief to out and out suspicion. Indians are often puzzled at why am I writing such stuff on Pakistan. Some think I am a Pakistani living in India, others send me e-mails calling me an ISI agent," Mayank said in an email interview.

"If somebody feels I'm a spy I just ignore them. If they e-mail me, I do not bother to reply. If they leave nasty comments on the blog I let them stay in the spirit of democracy," said Mayank, who is "amused" by the accusations.

The blog has also stirred up heated debates in cyberspace, especially with its posts on controversial issues like dating in Pakistan.

Asked about the origin of the name Pakistan Paindabad, Mayank said, "I have often heard Pakistanis shouting the slogan 'Pakistan Paindabad' during cricket matches. I think it's quite a catchy line. Like Hindustan Zindabad!

"Paindabad is a Persian word and it loosely means 'to stay'. As you see, despite its critics, despite all the doomsayers, Pakistan has endured. And it will endure. The country may have problems, like many other nations including India, but it will survive. It has its basics in place. "

Mayank was born with a different last name but his passion for Jane Austen and his yearning to be a "Sufi-hearted human being" led him to adopt his current name.

"I have never had any relatives in Pakistan. But I have made some close friends there. During my travels I met people who referred to themselves as Pakistanis -- not as Punjabis, Sindhis or Baluchis. So Pakistani nationhood, an idea which is still discussed in an uncertain tone, is actually alive and kicking."

Though he has got support from Pakistanis from all walks of life - columnists, journalists, artists, students, photographers and of course bloggers - the one person he really looks up to is columnist Irfan Husain.

"I like everything about him: his elegant writing style; his courage in criticising his own country; his sensible opinions; his charming travelogues. He is a real inspiration."

Mayank, whose Pakistan travels have been confined to Lahore and Karachi, wrote a piece on Lahore's famous Heera Mandi that may soon become the subject for a Bollywood film.

"Filmmaker Sanj ay Leela Bhansali plans to make a film based on one of my pieces in Pakistan Paindabad. This was a travelogue on Lahore's Heera Mandi. If the deal goes through, I guess it will be the first time that a big scale film will be based on a blogger's piece," Mayank said.

What really puts off Mayank is when people think he is doing some service to Pakistan. "The country doesn't need any charity. It is just an effort on my part to present those truths about Pakistan which the news-hungry media somehow forgets to cover."

So does he dislike anything about India's neighbour? "Yes. The overdose of biryani treats!"
Posted by Mayank Austen Soofi at 8:58 PM

I think i missed this blog site all this time. I just came across it when i saw that your blog has referred few visitors to my blog. In any case am really amazed to see the blog with the name "Pakistanpaindabad"
I was totally taken by surprise when i came to know that an indian started this website. Anyways, some one doing a great service should be appreciated no matter what, where and how so i salute you for your efforts. I am always available for any help and favor as i feel indebted to you for serving my country.
Pakistan Paindabaad!

Hey I never got any ink for my blogs! Good job Mayank - old friend, Usman

First of all you have my gratitude for creating this blog. I appreciate your efforts in doing so. I hope this blog would bring a fine example for our fellow Indians and Pakistanis who don't want to live in peace and harmony with each other. Keep up the good work. Peace.