Opinion - A Fight to the End 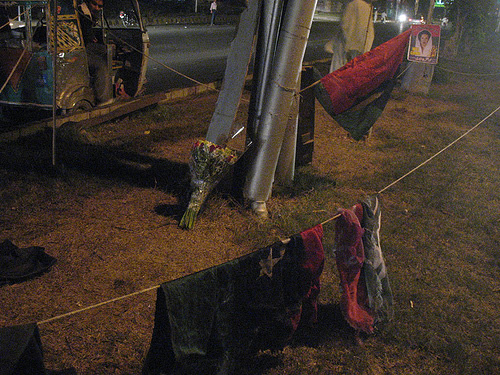 [By Irfan 'Mazdak' Husain; the author has been widely published in major Pakistani newspapers. He writes weekly columns for the Dawn, the Daily Times, and the Khaleej Times; picture by Raja Islam]

When Mayank Austen Soofi asked me to contribute a piece for his blog Pakistan Paindabad, I was vaguely thinking of writing about the contours of Indo-Pak relations. But when a suicide bomber tried to assassinate Benazir Bhutto on her triumphant return to Pakistan, my thoughts turned elsewhere.

All day on the 18th October, I had been glued to the box, switching channels to see who had the better camera angles. Platoons of talking heads solemnly discussed the significance of her second homecoming, comparing it with her first one 21 years ago. I had been on the Shahrah-e-Faisal, Karachi’s principal artery, on a cool evening in December, 1986, when she arrived from Lahore where she had been accorded an unprecedented welcome by adoring supporters. After she passed, young and radiant on top of an open truck, we drove to Jinnah’s mausoleum where she made a speech, as she had planned to this time. A few hours before she planned to return to the scene of her earlier triumph, I drove around, and saw thousands waiting patiently for their ‘Bibi’ to arrive. People were singing and dancing for sheer joy. As I wrote a few hours later, in a country with so little to celebrate, it was wonderful to see so many happy, hopeful faces.

But this euphoria was not to last long. As TV images of the carnage around Ms Bhutto’s truck started filling the screens, and the magnitude of the tragedy began to sink in, I was reminded yet again of what a dangerous place Pakistan had become. When we went to cheer her in 1986, an American diplomat had insisted on coming with us. She was courteously treated by the crowds, and it was simply no big deal. This would be unthinkable today, when security rules would not have permitted a diplomat to be out among large crowds.

Clearly, the suicide bombing was the work of Al-Qaeda, or one of its affiliates: they have the motivation, the means and the organizational capability to pull off such an attack in any part of Pakistan. But although these extremists number in the low thousands, they have supporters in all the intelligence agencies, and ideological fellow-travellers in the army. They are thus capable of death and destruction on a scale disproportionate to their numbers. And they are utterly ruthless and determined. To judge by the comments of the talking heads holding forth, these killers have the tacit blessings of significant chunks of public opinion. For instance, many of them implied that the fault was Ms Bhutto’s for not delaying her return as suggested by Musharraf. Others said she should have gone to the mausoleum by helicopter. This is a classic case of blaming the victim. Benazir Bhutto is a populist leader, and the PPP has always been more of a movement than a political party. Her followers are impassioned jiyalas, and are a breed apart.

What this attack has done is to draw a line between religious extremism and a sane and secular state. No Pakistani can sit on the fence on this one. In this fight, India can help by giving Musharraf a face-saving way out of the Kashmir mess. This would rob the fundamentalists of one of their key issues, and reduce their appeal. Of course, those who seek to impose their bleak vision of Islam on Pakistan would fight on, but anything that undercuts their attraction among the young can only help.

Given the way each country has demonised the other for decades, it is time India and Pakistan put aside their differences, and together fought extremism in all its forms. In this effort, blogs like Pakistan Paindabad can go a long way in promoting better understanding.
Posted by Mayank Austen Soofi at 10:59 PM

Kashmir has never been negotiated over (and it has always been two bitter negotiatiants sparring "over" it) honestly. An honest attempt at negotiation with clear attention to deliverables that will sell well will do much to strengthen moderates within Pakistan. I allude to statecraft (along with honest attempt) in the previous sentence, and I do think that the two can be reconciled in a way that benefits both countries. Of course, all of this should be buffeted by easing visa restrictions and lowering trade barriers. Both items that I mention above seem to have benefits that are obvious enough that it defies imagination that still remain unimplemented.

I do want to add that it is likely that Pakistan's moderate elite can act alone –successfully - in at least lowering the fever pitch of hostility against India. The fact that they haven't done so is a bit problematic. In fact democrats have chosen to exploit the issue as a way to garner votes. Bottom line is that pandering works.

So let me clarify the argument I am making- India needs to work towards strengthening moderates, not necessarily unabashedly support democracy. And I say this cognizant of possible impact on both India and Pakistan.