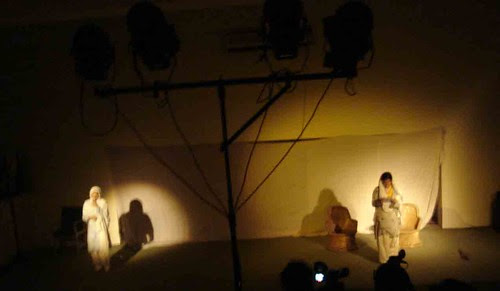 A play that moved both Indians and Pakistanis.

[Text and picture by Mayank Austen Soofi. The author travelled to Lahore in September, 2006]

Dholaks and garlands greeted us at the theater. The crowd shouted for a 'Visa-free India and Pakistan'.

It was our first evening in Lahore. We were a group of around seventeen Indians -- singers, writers, intellectuals, retired army generals, priests, and peace activists -- who had come to Pakistan to take part in one of those NGOesque peace seminars. We had crossed the international the same afternoon. Now a play was being staged in our honor.

Many Pakistanis waiting inside stood up and started clapping as we fumbled our way in the artfully lit darkness of the hall. We smiled and shook hands before settling down to watch the play.

A girl dressed in jeans clambered up the stage. She launched the evening by singing a Hindi devotional song which lamented how Hindus and Muslims could be capable of killing each other.

Her voice was sweet; and lyrics beautiful as only sad lyrics could be. They clicked. Heads bobbed up and down. Murmurs of 'how true, oh how true' were heard. The special occasion added to the mood. We Indians and Pakistanis were meeting each other for the first time only to discover that we were so similar - and yet different. Amidst such divided people, the song mournfully dwelled on the root cause of the divide – the hostility between Hindus and Muslims.

The Urdu play was titled Kahin Dair Na Ho Jay (Lest It Be Delayed). It had an unpromising start. There was no curtain in the first place. The back area of the stage, being used as a green room, was shielded by a white sheet. There were shadows furiously swarming around behind it. The delay gave me enough time to look around and do some people watching.

Pakistanis looked so much like Indians. No. No lady was dressed in sari. They all wore shalwaar kameeze. But young girls were like young girls everywhere -- restless, giggling, and whispering with hands covering their lips.

Meanwhile the hall hummed with murmured conversations. Suddenly, the sound system made crackling noises and spluttered to bhangra beats.

The setting, a female voiceover told us, is a neighborhood in Amritsar, the Indian town across the Wagah border. It was 1947 once again. India was cracking up and Pakistan had just come into existence. Muslims were killing Hindus and Sikhs, and Hindus and Sikhs were chopping up Muslims.

A soon-to-be-married Sikh bride and groom were sitting together. The bride's sister and her friends sang a lusty Punjabi folk song wishing her the wedding-night happiness. The lyrics were aimed to tease the groom whose friends, in turn, did a zesty dance around him.

The next act had the poor bride being kidnapped by Muslim rioters. The younger sister was left dazed. The voice-over explained that the Sikh bride was taken away across the border to Lahore.

Time journeyed along in the play. The sister in Lahore was made to convert to Islam; and made to marry a Muslim man. Adapting herself to a new life, her only wish was to see her younger sister in Amritsar. By then India-Pakistan relations had soured and it was impossible for most people to visit loved ones on the opposing side.

Meanwhile the sisters, one Sikh and the other Muslim, one Indian and the other Pakistani, one Amritsari and the other Lahori, regularly exchanged letters. But they lived separate lives, became mothers, were widowed, and became grandmothers. The continued tensions between the two nations kept them separated. Their desire to meet remained a desire.

Both Indians and Pakistanis in the hall could understand the helplessness of these sisters. Amritsar and Lahore has less than forty miles between them and yet they could not meet.

In spite of such close distance, most Pakistanis would find it easier to fly to Atlanta than to drive to Amritsar. As for Indians, it takes longer to commute between the two extremities of Bombay than to travel from Amritsar to Lahore. Yet most Indians would never get to visit this city.

The frustration was more intense because the travel between these two nations could be inexpensive and hassle-free. Easily.

Yes, we could understand the plight of these sisters.

Finally, the older sister did manage to cross the border into India, but she arrived too late. Her sister in Amritsar had already died.

The actors received standing ovation. We were quite moved.
Posted by Mayank Austen Soofi at 10:55 PM

The play was inspired by two Indian movies, Pinjar and Mammo. That goes to show how popular Indian movies are in Pakistan. There aren't very many Pakistani movies one could recommend to an Indian, or any audience really. However, I do encourage our Indian friends to watch two Pakistani films, Khuda Ke Liye and Khamosh Pani.

Don't know about Khuda ke liye but the khamosh pani (also known as silent water to non-native speakers) is an excellent movie.
I didn't know it was pakistani movie though as it had kiran kher and other indian actors...