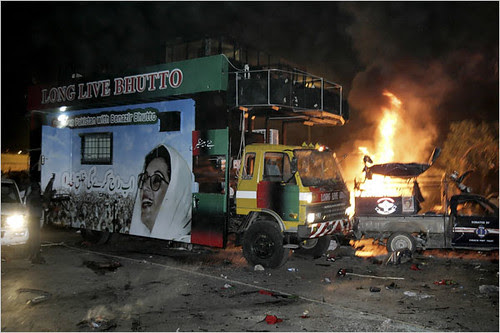 Is Benazir Bhutto’s second return as hopeful as her first?

Amidst blasts that killed more than 100 of her supporters, Pakistan’s former and (perhaps) future Prime Minister, Benazir Bhutto, returned home to Bilawal House at Karachi's Clifton. This ended an 8-year-long self-imposed exile in Dubai and London. The attack on Ms. Bhutto's convoy proved it was sensible of her to leave the three children behind. But assassination threats by terrorists did not deter thousands of working-class supporters, of Sindh and other provinces, from flocking to the city avenues. The wealthy were glued to their television.

It was a tender picture. Wearing green shalwar kameez and white dupatta, Ms. Bhutto had tears as she emerged out of the Emirates aircraft. This woman, of course, has been fortunate. Belonging to a great feudal family, she was the eldest child of the country’s most dynamic politician. Father Zulfikar Ali Bhutto groomed her as a successor to his legacy. Educated in Radcliffe and Oxford, she became the Muslim world’s first democratically-elected woman Prime Minister. She was twice elected to that post.

Yet there is much to be pitied about Ms. Bhutto. Father was hung by the noose. Brother Shanawaz died in suspicious circumstances in France. Second brother, Murtaza, was killed in a mysterious gunfight in Clifton. Husband Asif Ali Zardari spent 8 years in prison. She herself wasted about 5 years in solitary confinement during General Zia’s regime. Meanwhile her life remains in danger.

No wonder Ms. Bhutto excites sympathy even from her critics. She has seen too many bad times; has made too many sacrifices. She deserves all the adulation she has been greeted with. As eager crowd besieged the streets to welcome their leader, she reminded the romantic heydays of 1986. (That is till the blasts marred her triumphant procession.) That was also the year of her Return but a very different one. Then back from exile in London, she would crisscross the nation in a steel grey Pajero jeep raising slogans of General Zia jawe, jawe, jawe. Today she has power sharing agreement with the General. That year she was Ms. Clean. This year she comes tainted with corruption scandals.

Yet, we are not pessimistic about Ms. Bhutto, the country’s truly popular leader. If she creates a smooth working relationship with General Pervez Musharraf, restrain the entrepreneurial instincts of her husband, strengthen the ‘moderate middle’, rein in religious fundamentalism, limit America’s influence, phase out the army’s extracurricular hobbies, and somehow manages to stay alive, we feel this can as well be one of those defining moments for Pakistan. Once again.
Posted by Mayank Austen Soofi at 6:42 PM

The bomb blast, stunning as it was, may cramp Ms Bhutto's campaign style. Shortly before it happened she is reported to have told The Hindu that the mammoth turnout reflected people's desire for change - "they want democracy,they want jobs; they want security of lives, and livelihood".
The urgency of their plea for security need not have been so brutally legitimised by the catostorphic blast that followed her observation.
Ms.Bhutto may have political credentials to bring about the changes the people need; a change from, what she calls, a 'dysfunctional democracy' (I like that coinage). But the disturbing possibility to which the blast points is that she might be beaten back by the socio-religious factors that seems to be at work for change of their choice; a change in reverse gear, to talib-ism.
I don't vote for BB, but my concern, as Indian, is whether Ms.B's return would strengthen or snuff out elements that are proactive in furthering social,cultural and economic ties with India.

Secondly, or the only reason why i signed in was to convey our condolences to the people of pakistan on behalf of india. I feel that un-necessary innocent people are killed. This evil is of no religion its simply evil which robs people of peace and happiness. When one person dies his entire family dies remembering him daily! So any death from any country in bad.
Our prayers are with the people who lost their dear ones in this brutal blast. May god give them the courage..

Although I am no fan of Bezamir Bhootni, as a Pakistani I welcome her return, she has the right to come back to our country, so did Mian Natkat Shareef. As a Pakistani I am well aware of and remember the rape this dubious duo perpetrated with our county’s finances and Quomi Khazane.
However, the fact remains that both of them come from the people and represent the people of our nation. The army and jihadis (who have many foreigners from countries to our west in their midst) are not natural to the majority of people of Pakistan. Neither have been voted in and have been forced upon the population, they hold ideals that are not indigenous – English speaking westernised Army, and Arabic pasand extremists. The clash of civilisations is taking place in our own country, where the vast majority of people have no say in what happens. We are constantly made to feel either that we are not Islamic enough or not gorafied western enough, the fact is we are neither! We are Punjabi, Sindhi, Balochi, Pathan and Kashmiri as well as many ethnicities from our neighbouring big sister.
If I decide to offer flowers and light a diva at the shrine of my favourite saint why should I be made to feel either ‘Unislamic’ or ‘pindo’, if I speak in my mother tongue, Punjabi or any other sweet indigenous language such as Sindhi, Seraiki, Urdu, Pushto or Balochi why should I be made to feel uncouth or uncivilised? Is my language not good enough, is it only English or Arbi that are worth respecting? Are my people (normal Pakistanis) here to be slaves to these self imposed masters? There are many fault lines in my country (international and domestic) for the international ones I care not much, I would prefer that the needs of our people such as basic education and healthcare come first before anyone else’s ‘war on terror’. PPP, MQM and PML come from within the people, they understand our needs, and whether we like it or not they are our only ‘voice’. They can eliminate these fault lines because they understand them. BB’s return gives the ordinary Pakistani a bit of hope that at long last our issues will be dealt with by our own people in our own language, this Sindhi mother of three gives all us Pakistanis a bit of self respect and esteem, she is Pakistani first and gives Pakistaniyet importance, she may have struck a deal but she is not a gorafied general or an Arbified jihadi, she is Pakistani and sees Pakistani people as her people, instead of the aloof remaining generals and blow-themselves-up jehadis. There has been an imbalance towards two (foreign) extremes in our country and her arrival adds a local balance – however corrupt it’s a balance well needed. It’s going to be a long and corrupt ride but finally Pakistan for the Pakistanis.

All Pakistanis should stand in support of democracy, because it is the only Pakistan can survive.
The attack on the Ms Bhutto's arrival rally is an attempt to thwart this process. Every Pakistani who is with humanity should understand that situation demads sacrifice from them. Stand up and join hands for the sake of Pakistan. Pakistan Paindabad!!

All Pakistanis need to understand that the only way Pakistan can survive is by supporting and establishing democracy. The attack on Ms. Bhutto is an attempt to thwart the democratic movement. It is high time that all Pakistani should join hands against the dictatorship and stand for the democracy. Long Live Pakistan

Mayank, thanks for this nice post -that sums up the situation. Keep up the good effort - your blog is a nice gesture of friendship and understanding.

Hope you got a chance to see my post on these incidents.

Benazir has no soul and is corrupt as hell. mush is a dictator, nawaz sharif has the intelligence of a turtle. Man we are doomed....I say Imran Khan should be the next prez