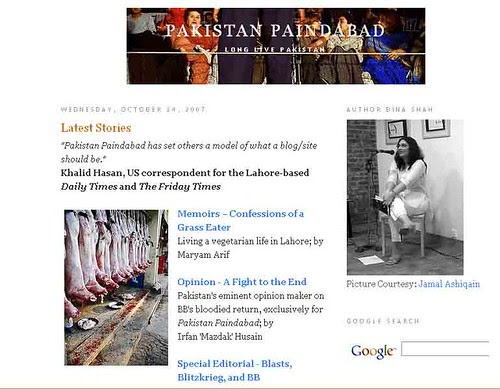 The blogsite needs a Pakistani collaborator.

Time passes quickly; it certainly appears that its pace has hastened as I age. Whether or not that is true doesn't quite matter, what does matter however is that Pakistan Paindabad is more than a year old. In that time earth has circled around the Sun, spun around its axis 365 plus times, the general sahib has faltered far too many times on his way to implementing a gerrymandered democratic process, and most unbelievably a small blog started by a well meaning Indian gained a regular following, and also a fair amount of attention from the press.

Mayank Austen Soofi is an Indian, as many of you would know - not a 'typical' Indian – not by philosophy, by intellect, or by values. The fact that he isn't a 'typical' Indian hasn't allayed doubts about the blog. Many have mused – some openly – whether he is an operative for RAW. Perhaps he is. The acolytes of the Saffron Brigade – whose numbers abound on the Internet- have alleged that is an agent for the ISI. Perhaps he is that too which would make him a dual agent. That would be quiet something, wouldn't it. I somehow suspect - perhaps through my rather longish acquaintance with Mayank - that that is true.

But that still leaves the question as to what an Indian is doing running a largely celebratory blog on Pakistan. I wish I knew but I don't. But I suspect that it is has something to do with increasing understanding about Pakistan – the Pakistan which is predominantly known for its Islamists, its diabolically politically gifted General, its status as a Nuclear armed state, and its fractious ongoing dispute with India. Perhaps more correctly it is a venture to foment understanding about a country by providing a better understanding of its people –their aspirations, likes, dislikes, peeves, and the (five) things they are 'proud' of. That is quiet an ambitious statement, and I doubt that PP has been successful in making much headway amongst Pakistan baiters who rarely switch off Fox or the numerous Indian equivalents. Nonetheless it’s a worthy motive.

So what do we do with worthy motives and all the two-penny idealism that is available by the liter at the corner haberdasher? We try. For, as G.K. Chesterton wisely said, "Anything worth doing is worth doing badly." It certainly doesn't mean that we shouldn't try to improve, and there is every indication that Pakistan Paindabad hasn't tried to rest on its laurels or its lack thereof, which was the case until very recently. But given the recent media attention, Pakistan Paindabad needs to strive anew and with more vigor. And for that it needs your help. If you believe in the larger goal of the site, not that that has been cast in stone but direction certainly has, then help it achieve those via your own contributions – be they then be articles or simply educated criticism, to enhance the 'probability' of its success.

So let me cast the first stone, and my contribution. I have little doubt that for Pakistan Paindabad to be really successful, it needs an active permanent collaborator from Pakistan. I believe that it will go a long way in providing more in-depth coverage about the panoply of cultural, political, and social issues that define Pakistan and yet evade news. Now it's your turn – send in your comments and your offers to volunteer for the job. Pakistan Paindabad.
Posted by Mayank Austen Soofi at 7:47 PM

I appreciate Mr. Mayank's efforts to bring out the positives about Pakistan and I sometimes enjoy reading about the life of people across the border. But what I don't enjoy is that while making nice comments about Pakistan the author sometimes looks down at India and that is something which I don't find acceptable and perhaps the reason you have the negative comments. Please bring out positives on both the sides and let's make friends from both the sides and bring out a message friendship and peace. All the best for your future.
- Om Shanti