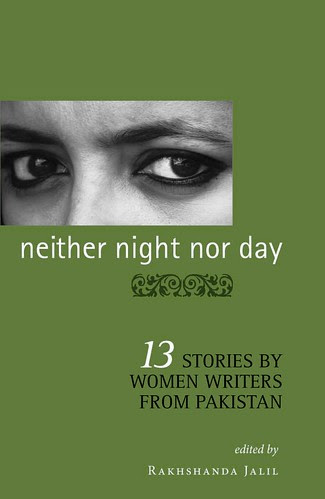 neither night nor day, 13 stories by women writers from Pakistan.

When reporting on “the most dangerous country in the world”, it is tempting to only look at suicide bombers, ethnic riots, and military coups. Why bother about Pakistanis who carry on through the ordinary dramas of life. Isn’t real life boring?

In journalistic accounts real people are usually absent, only appearing intermittently in pro forma scripts as part of homogenous crowds of ‘victims’, ‘supporters’, ‘middle class society’, ‘tribals’, or ‘fundamentalists’. Occasionally memoirs and travelogues peek deeper, but then they are exceptions.

It is here that fiction can exercise its redemptive power and bring fully formed human beings back into society’s portraits. A novelist isn't manacled to obligations that bind bad journalists. Instead she can freely employ her observations, insights, and sensations, encountered in everyday world, as raw material for her work. Curiously, this invented world can be more real than the real world. For instance, Karachi in Kamila Shamsie’s Kartography has more life than the Karachi of Owen Bennett Jones’ Pakistan – Eye of the Storm. Shamsie’s city has lovers, social divides (the characters live on the right side of Clifton Bridge), and family secrets. Jones’ metropolis unravels the volatile equations among Pukhtoons, Sindhis, muhajirs, etc. While both these profiles are essential to understand the city, Karachi of the novel is more fulfilling.

Expecting to find just this kind of fulfillment, I picked up neither light nor day, a collection of 13 stories by women writers from Pakistan. That Pakistan has no international literary rock star like Arundhati Roy or Alice Munro meant that the decision by Indian editor, Rakshanda Jalil, to come up with the idea of producing an anthology of women writers from there took some daring. Ms. Jalil, who has taught English at the universities of Delhi and Aligarh, presently works as Media and Cultural Coordinator at Jamia Milia Islamia University in the Indian capital. She writes in the introduction:

This is a scary start. My primary purpose in books is to seek pleasure. I may try not to care about the author’s name and fame but I do expect technical elegance. Short stories must bring the moment alive; their characters must strike a quick rapport; and the language must be intelligent.

The opening story is refreshing. Plans in Pink is set in Karachi. Instead of dwelling on typical Karachi issues - crime, muhajir-pakhtun divide, etc., author Kiran Bashir Ahmad sneaks out a fragment of Christian life in the city. Mrs. D’Souza’s daughter has found a gora husband in Australia through Internet, and is happy to be relieved from her mother’s clutches. But Mrs. D’Souza has no plans of ending up like “graying old wives…who amble forward…up the drive of the Grand Club...to play the same old Mah-jong or chess or bridge…” She plots to follow her daughter Down Under.

In Leaves, Khaleda Hassan’s protagonist, wife-mother-and-grandmother Rahela Nasir, muses on Tennyson’s The Lotus Eaters as she accidentally meets a friend from college days. He has drastically changed “except for the scar on his cheekbone, below his left eye.” Next day she expects to see him again and instead of draping herself in a chador (as usual), she picks out a presentable shalwar suit from her wardrobe.

However, emphasizing only the ‘normal’, like-you-and-me aspects of Pakistani society, conceals part of the truth. There remain a few social evils that are unique to Pakistan that cannot be ignored. Like honor killing.

In The Wedding of Sundri, one of the most moving stories in the collection, author Bina Shah narrates the story of a 12-year-old who is married to a groom almost double her age. The fearful child is sent off in a bus to her new home, and to a tragic finale.

Not all stories are based in Pakistan. The title story is neither here nor there. Sabyn Javeri-Jillani’s protagonist lives in London but neither is she able to relate to fellow Pakistanis nor to Brits. She feels naked as she notices hejab-clad girls in a Biryani shop. Her English husband does not share her passion for Bollywood films. He seals his clothes in plastic if she cooks a curry, and spreads a plastic sheet on the dining table if she sucks on a mango.

On reaching the 13th story, I realized that the eclectic mix will help readers understand this complicated country. The stories draw us into the inner lives of Pakistanis. The literary finesse too is a consideration. Each tale is smartly structured, different in its theme and together they give a sense of various sub-layers that has fashioned this society. I turned over the last page with an unhappy feeling that life in this part of the world is struggling to rise but is being constantly pulled down by dark forces. It is neither night nor day.
Posted by Mayank Austen Soofi at 6:28 PM

where is this available from?

Mayank, this was quite a review. Liked your comments and empathy..Even though at the end you were tempted by cliches - the'dark' forces versus I suppose the light...
but then you made up for it in you analysis by highlighting that this is not a simple country - it is in effect quite a complex place to understand..
cheers,RR

Dear Sir,
Your review was very incisive but sounded confused towards the end. Also a collection of short stories by different authors will have a few stale bits. That shouldn't reflect on the total content.
Umaima Shafiq.