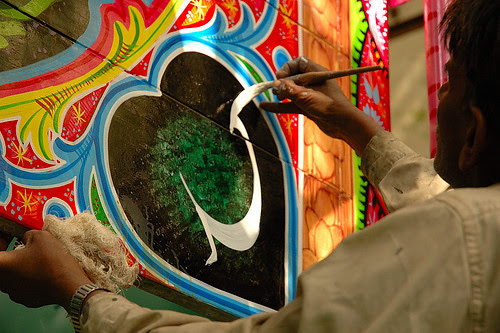 Excursions into a little known world.

This article is exclusively written for Pakistan Paindabad. 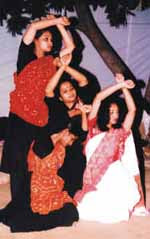 The art world of Pakistan is not given the attention it deserves. But amends are being made. Arts Pakistan, or Artspak, is a recently developed website, with an exclusive collection of videos, paintings and photographs that strictly deals with the country's vibrant art scene. The website has been developed by Khalid Sherdil, a civil servant. The gentleman was inspired by Athar Tahir, a senior civil servant who also happens to be a poet. Artspak is very decided about its aims:

Our objective is to preserve the arts, culture and talent of Pakistan. This site is dedicated to the Artists of Pakistan: Painters, Actors, Dramatists, Musicians, Dancers, Singers, Sculptors, Photographers or Writers. If you are an Artist, you can Host your work Free. Just email us pictures/videos of your work and your biography.

My favourite pick in the website has to be the video-clips from Ajoka, a socially aware theatre group based in Lahore. (You may watch the video-clips here.) This is what Artspak say on Ajoka:

Ajoka, which pioneered the theatre movement in Pakistan, was set up in 1983 by a group of young people led by Madeeha Gauhar, a TV actress and theatre director. Ajoka's first play, Badal Sarkar's "Jaloos", was performed in Lahore in 1984, in a house lawn in defiance of the strict censorship laws. Since then Ajoka has been continuously performing socially-meaningful plays within Pakistan and abroad. It has now over two dozen original plays and several adaptations in it's repertoire.

While Pakistan's mainstream art scene is dominated by artists from Lahore and Karachi, Artspak has tried to probe further. For instance, it introduced an artist based in Baluchistan. This was indeed a creditable job of highlighting the styles of that remote corner of the country.

However, the most fascinating bit was the biography of Muhammad Umair Arif, a young male Kathak dancer who has defied his family's traditionalism to become a kathak performer. Under the Mughal rule, Kathak became a highly nuanced chamber art that was patronized by arty rulers for centuries. It has evolved over time as a formidable art form that refuses to fade away despite the pressures of modernity and the need for popular art that is commercially viable. The good thing is that Umair is not the only one. Lahore Chitrkar has emerged another focal point for nurturing and introducing a range of musicians and dancers. Perhaps all is not lost when it comes to art in the land of the pure. 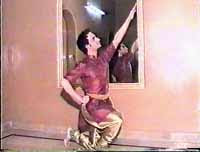 Artspak is a welcome endeavour. While it does need further consolidation and some re-arrangement, it provides a good introduction to the diversity and colours of Pakistani arts. My good wishes to the website.
Posted by Mayank Austen Soofi at 5:39 PM