Honey, How We Shrunk Musharraf's Emergency 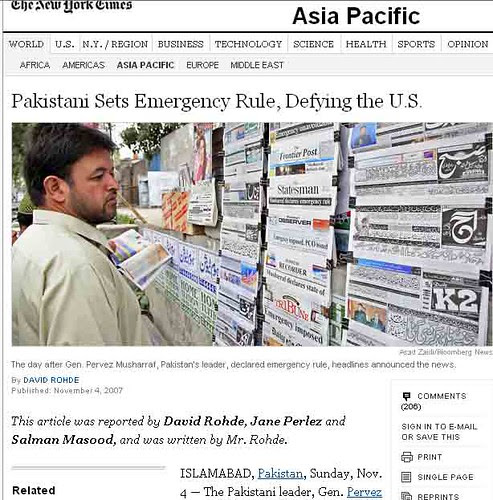 On Saturday, November 3 (Pakistan time), genuinely apatehtic Western journalists took to telling the world about how ‘Pakistan’s Musharraf’ - You know it is nice of them to clear up whose Musharraf they are talking about for it is not always clear - had declared emergency. In doing so, they paid as much attention to a third-world dictator enacting Martial law, as they have in some time.

The calamitous event was reported with the usual combination of scant detail, high impact graphics, half-baked (sometimes skipping the oven all together) analysis, all topped with alarmist rhetorical flourishes that may give you a heart attack if you don’t watch out.

The news day actually started a day earlier with reporting about speculation, and government warnings against speculated action. US, proudly and staunchly backing Musharraf at least since a day after that calamitous day in 2001, warned their pet dictator ‘against martial law’(San Jose Mercury News). When the threat of declaring martial law grew, the ‘world grew concerned’ (Guardian) simultaneously. And when a ‘desperate Musharraf’ (Trend Information, Azerbaijan!) declared emergency, it left US in a ‘tizzy’ (Calcutta's Telegraph), as it ‘reel[ed]’ (AFP) under the blow.

US immediately took umbrage and issued ‘condemnation’. The ‘world’, not to be left behind, ’roundly condemned’ (Duetche Welle, Germany), ’slammed’ (Earthtimes, UK), and ‘rapped’ (The Province, Canada) General Sahib.

US Secretary of State Condoleezza Rice went further. Wanting ‘Pakistan to evolve as a democracy’, she appealed for a return to the ‘constitutional course’ (Bloomberg) even as the phrase "cruel and unusual punishments”, in US’s own constitution, was being debated to see if ‘coercively inducing a drowning sensation’ met that criteria. All this condemnation must have left Mr. Musharraf chagrined.

It was a ‘Sad day for Pakistan’ (The Daily Star, Bangladesh) when an ‘out of control’ (Nation Multimedia, Thailand) Musharraf chose to launch a ‘coup within a coup’, and put Pakistan under his ‘iron fist’ (The Standard, Hong Kong – an area that reels under the iron fist of its own big brother).

On that ‘black’ day, Western journalist’s thoughts didn’t stay long with people in Pakistan, as reporting on martial law gave way to more pertinent matters like ‘threat of nuclear weapons falling into wrong hands’, and ‘War on Terror’.

After all, the concerns of the media are solely determined by what (and how) they can best pander conditional on what is available. The pavlovian reactions to international crisis, the cues media uses to determine when to cry fire and when to cheer, are all rather simplistic - Democracy is good, autocrats are bad.

Forget then that sometimes ‘enlightened moderation’ is the best alternative. Ignore too that nothing has changed substantively in Pakistani politics – control still wrests with the general. After all it was only a ‘coup within a coup’. Banish any thoughts that Benazir, the incomparable, ran a regime true to her name - only if in levels of corruption.

I misstate my point, as I often do, for people who know little don’t need to deliberately ignore. They simply write. Till a new story appears and fuels a new news cycle, provides more cause for alarm, and more time to run ads.

It appears that Pakistan has had its day in the sun. New York Times is not waiting with baited breath; there is a cell phone jammer in the market that can stop the person sitting next to you from yammering while you try to read about Paris Hilton. (Number 1 story on NY Times website at the time of writing this column) Yeah, Ms. Hilton is back. Bye bye Pakistan.

we always get into the limelight for all the bad things...too bad we couldnt keep the attention for too long ;)

Why be sad karachi waali......If we cant be known for anything constructive then might as well be known for our crappy politicians and good for nothing army