Opinion - Iqbal, Islam, and the Emergency 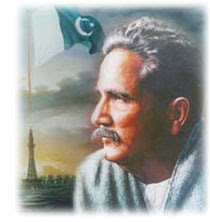 Our poet had envisaged a different Pakistan.

In November, Pakistan commemorates Allama Iqbal’s birth anniversary with the usual lip-service. The key messages of the poet seem to have been lost in the maze of officialdom. This is further exacerbated by the hijacking of Islam and politics by vested interests, not to mention the recent events that have shook us all.

Iqbal opposed exploitation, Mullahism, emphasised the principle of movement in Islamic thought; and highlighted “Ijtehad” (re-interpretation) of Islamic teachings through a modern parliamentary framework. Alas, all of that is nearly forgotten.
For instance, he was clear about the layers of exploitation:

The world does not like tricks and
Of science and wit nor, their contests
This age does not like ancient thoughts,
From core of hearts their show detests.

O wise economist, the books you write
Are quite devoid of useful aim:
They have twisted lines with orders strange
No warmth for labour, though they claim.

The idol houses of the West,
Their schools and churches wide
The ravage caused for, greed of wealth
Their wily wit attempts to hide

The questions that Iqbal raises in his poetry are universal and deal with the larger issues of Man’s relationship with God and the Universe. This is why his poetry does not address any particular group, but the entire Muslim Ummah. He has inspired Muslims with the realization of life and urged them for self-reform and self-actualization by searching for their khudi or self.

After centuries of stagnation, Iqbal was a voice for reformation within Islam. Shah Walliullah had tried to open the debate but Iqbal represented the twentieth century consciousness of modern Muslims. Iqbal is therefore known across the Muslim world, widely read and quoted. Pity that in the homeland that he dreamt of talking of ijtehad threatens many a fatwa mongers. In Zarb-e-Kalim, he sings:

Your prayer cannot change the Order of the Universe,
But it is possible that praying will alter your being;
If there is a revolution in your inner Self
It will not be strange, then, if the whole world changes too

In the famous series of lectures – The Reconstruction of Religious Thought in Islam – Iqbal held:

“...but since things have changed and the world of Islam is to-day confronted and affected by new forces set free by the extraordinary development of human thought in all its directions, I see no reason why this attitude (finality of legal schools) should be maintained any longer. Did the founders of our schools ever claim finality for their reasoning and interpretations? Never...The teaching of the Qur’an that life is a process of progressive creation necessitates that each generation, guided but unhampered by the work of its predecessor, should be permitted to solve its own problems.”

“this message sums up an outlook of life as a forward assimilative movement, even as one remains rooted in an Islamic heritage. Indeed, the message arose in a historical context when old certainties were crumbling and the new were struggling to be born: Rumi lived at a time when the Muslim world was traumatised by Mongol invasions, while Iqbal’s was a time of awakening of the colonised masses that eventually led to the independence of India and Pakistan.”

What Pakistan appears today is not the dream that Iqbal articulated for a separate homeland for Muslims of India. The extremists waving their flags on government buildings and propagating a version of Islam that Iqbal resisted, while the peaceful activists are behind bars. I digress: The vision of the Quaid for a modern, democratic Pakistan where rule of law was to prevail has also been undermined. Somehow, I have been thinking of Habib Jalib - wish he was alive today - here are a few verses by him from a poem entitled Youm-i-Iqbal:

When we arise to wake the poor, the have nots
A beeline to the police station they make, these wealthy sots
They say that God this wealth to them allots
Oh these trite excuses, oh these dusty plots
Night and day the working men’s blood they suck, o poet of the East
These congenital liars, with the vileness of a beast

(Translated by Fowpe Sharma and Urdu transliteration by Hasan Abdullah)

It is time to reclaim Iqbal and save him from the clutches of forces that have been attempting to maintain the status quo; and promote obscurantism. His vision starts from the self and then reaches for the society and the Universe.
Posted by Mayank Austen Soofi at 7:40 PM

What Pakistan appears today is not the dream that Iqbal articulated for a separate homeland for Muslims of India.

By your own admission, Iqbal rejected a common statehood with Hindus, while also denouncing Western science as "tricks" and Western economics as essentially anti-labour. Well, then what was Iqbal's vision of a modern state?

What is this vision of Iqbal's? Its basically a separatist vision, one that is limited to muslims. It seems less a vision than an extremely limiting viewpoint and one that makes little sense in a multi-cultural world.

Should every ethnic and religous group live separately in its own "pure" country? Sounds more like a nightmare than a vision to me....