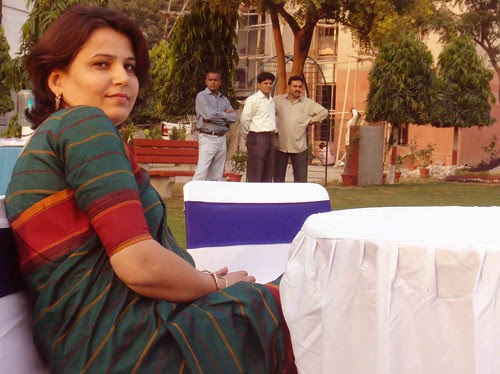 The editor of a new anthology of Pakistani short stories on the country’s vibrant writing scene.

Rakhshanda Jalil has taught English at the universities of Delhi and Aligarh. She recently edited neither night nor day, a collection of 13 stories by women writers from Pakistan. The book has been reviewed in these pages. Ms. Jalil talked to me at New Delhi's Jamia Millia Islamia University where she works as Media and Cultural Coordinator.

Welcome to Pakistan Paindabad, Ms. Jalil. Your anthology of short stories by women writers from Pakistan has 13 stories. But 13 is an unlucky number?

There was no design in it. It could have been 12. It could just as well have been 14. There was actually another story which I wanted to add in the collection. About a boatman and his angst in a time of plenty when the river is in spate and he is earning more money than ever, yet he is deeply troubled. I thought it was a most unusual story and did a good job of busting the myth that women write about ‘womanly’ things. Unfortunately, the author needed more time to work on the story and we were ready to go to press, so it fell through. But, really, there is no significance about the number.

There is also no significance to the chronology of the stories. There is no common theme (or any popular stereotype) uniting the stories. My purpose was to show the diversity. You will find ghost stories as well as romances in this collection.

Why the title: neither night nor day?

It is taken from one of the stories, the one by Sabyn Javeri-Jillani. It seemed apt for the collection. It indicates that ‘in-between space’ that a lot of women occupy in their daily lives, neither fully ‘this’ nor fully ‘that’. It also hints at the coming together of contraries – again, something that the lives of women exemplify so beautifully everyday.

Yes, perhaps my next anthology can be short stories by writers from Pakistan (laughs). As for neither night nor day, I had intended to pick up stories by women. But I was quite certain that the selection should not deal with women’s issues alone. It should interest all readers regardless of gender. Also, to the best of my knowledge, there is only one such collection (by Pakistani women writers) available in India; it is called And the World Changed and it has been published by Women’s Unlimited.

How come this interest in Pakistan?

I was a Visiting Fellow at the Academy of Third World Studies in Jamia Millia Islamia University from 2004-05. I was fascinated by the politics of languages which made me curious about the supremacy of Urdu in Pakistan. I observed that it has done to the languages of Pakistan what English has done to the bhasha literatures in India. In India, English was a foreign language that imposed itself on provinces speaking their own languages. Something similar happened in Pakistan. Do you know, till the creation of Bangladesh in 1971, the majority of Pakistanis spoke Bengali? Yet Urdu, essentially a foreign language to regions that eventually made up Pakistan, was imposed willfully and vigorously. It lead to language riots not just in Dhaka but in many parts of Sindh and Balochistan.

The Muhajirs brought with them Urdu -- a lot like English that came with the angrez to India and thrived at the cost of regional languages. So, really, my interest in Pakistan is not in its geo-politics but in the politics of its language(s) which is a lot like in India. Except that in India, we rue the oppression of Urdu whereas in Pakistan, it is Urdu that is the oppressor!

Initially I wanted to edit a collection of stories written in the regional languages of Pakistan such as Punjabi, Sindhi, Pashto, Siraiki, etc but could not find collaborators. And I didn’t want to access these stories twice or thrice removed through English or Urdu translations.

How did the present collection take shape?

A couple of years ago I was editing a website for the British Council Division (in India) that dealt with South Asian writing. Once, we did a special issue dedicated to women writers from Pakistan. I couldn’t use everything I had trawled and collected, and was left with the feeling that a lot of this material ought to go into a book. Bina Shah’s The Wedding of Sundri, was first used in the website but I liked it so much I wanted to use it again.

I had met a lot of people on the internet, gathered a lot of email ids, and generally established contact with a lot of women – some living in Pakistan, others of Pakistani origin but living in different parts of the world. Some were known names in India and elsewhere; others were virtually unheard of. I asked them to send me stories, which they did with much enthusiasm and eventually I was able to shortlist these 13 stories.

Incidentally, after having edited this collection, I have become an ardent devotee of the internet and the huge world it opens up. I have managed to stay in constant touch with the women who have contributed to this collection – something that I could never have done in the old days of snail mail.

How did you select stories?

As I have explained in my Introduction, my criteria have been somewhat pedestrian, in the sense that I deliberately set out to choose ordinariness as my anthem for this collection. I do believe that by celebrating ordinariness we celebrate life as it is known and lived by scores of real people. I have always maintained that there is a great deal to be said for the Commonplace – for it is often a most reliable barometer of a society and its people.

Is there any story in the collection that touched you in a special way?

She Who Went Looking for Butterflies by Zahida Hina left me with goose bumps because I’m a mother with children still young enough to be clingy in a way that only small children can be. Zahida Hina’s story is about a woman on death row who is spending the last moments of her life with her sleeping child before she walks to the gallows. We do not know why the woman is being sentenced to death. Perhaps there are political reasons. We don’t know whether she is a murderer, a thief, or an adulteress. But the power of the story is such that the author has made the cause of the punishment completely irrelevant. The grief of the mother makes everything else secondary. The power of the pen is such that sometimes it can make the real so completely surreal.

Considering Pakistan’s troubled past, and present too (dictators, religious extremism etc.), how have events in the country’s contemporary history influenced its literature?

Suppression doesn’t break the will of the people. If anything, it produces inspiring work. Poets like Faiz Ahmed Faiz, Ahmad Faraz, and Fahmida Riyaz are some of the many writers who instantly come to my mind. Is it surprising that Pakistani literature blossomed in Zia’s time?

Let’s talk of Baluchi poetry. When suppressed during the years when Urdu was being imposed at the cost of regional languages it went underground and took roots within. Despots must understand that repression works the other way round. The infamous Hudood Ordinances too gave birth to some spectacular poetry. We Sinful Women, a collection of poems by seven women poets, is one such example.

I understand you wanted to bring out the diversity in Pakistani literature. Was that difficult? What do most writers in Pakistan write about anyway? Which are the popular themes? Are there some tired predictable subjects that you confronted again and again? In other words, are there any stereotypes?

The stereotypes are in public perception, not in the writings per se. Publishers, in turn, are guilty of perpetuating stereotypes in the (mistaken) notion that they sell. But people want new things to read. As a reader I am quite sick of the same boring stories, especially in those predictable collections of women writers put together by women editors who keep flogging the same dead horses. I wanted stories that stayed clear of those gloomy, dismal subjects that are (again mistakenly) considered popular.

Also, I think it is ridiculous that people should assume women’s writing is of over-riding all-consuming interest to women readers alone. Do you think Black writing is meant for a Black readership or Dalit writing for Dalit readers? So why have these silly assumptions about women’s writing which does no good except perpetuate stereotypes of the worst kind.

You had the opportunity to interact with several authors while editing this collection. Are most writers from a privileged background?

In earlier days, English writing by women in Pakistan was for the privileged. The writers themselves were from upper class families and they spoke about concerns for the like-minded women. More often than not, these women had been educated abroad. Even now the better known, more established names are those who live abroad or have studied abroad. But it is changing. I have noticed a change in the profile of the writers. If I am not mistaken, the present generation of women writers, especially in English, came from diverse backgrounds.

What, according to you, is the uniqueness of contemporary literature in Pakistan? What special place, if any, it occupies if seen in a global context?

I shall confine my remarks to the contemporary literature in English and Urdu from Pakistan, since I am familiar with those rather than the regional language literatures. I find more women from Pakistan writing about things typically of Pakistan and about Pakistan. Refreshingly, they speak more openly about issues that were traditionally kept under wraps. Equally significant is the way they use English, appropriating it and indigenising it for their own needs.

Thank you for talking, Ms. Jalil.
You are welcome, Mayank.
Posted by Mayank Austen Soofi at 6:50 PM

Mayank: thanks for writing this lovely interview: informal, readable and insightful.I think another way to look at the Pakistani literature of certain variety is better known as "literature of resistance" - even when where it is not about resistance per so, by highlighting the injustices and oppression, it attempts to challenge.

I think this is also a most appropriate article for your blog - it is about Pakistan, the subject is Pakistani stories and the protagonist - like you - is in India.

It would be great to read about the books that are being published on Pakistan, the discussions and events concerning Pakistan in India.

Such flow of information is essential; and the Internet provides a superb means to know even where postage and movement between people remains hostage ot officialdom!

P.S. on a lighter note, the readers could have been spared of interviewer thanking the interviewee..after all the profundities, this was a little case of over-writing.

We were delighted to visit your blog. A few friends have set up a blog-magazine inspired by the Pak Tea House - that was once a venue in Lahore for intellectual discourse and exchange!

We plan to get several writers - younger and older write and exchnage ideas. We would like you to contribute as well.

Pakistani literature is top class and 'Ayub Khan and his army clan 'has played a big role in traumatizing the literary circles.The result is some great stories and poetry.Faiz thrived on that.But had these miseries not been there we still had these great men writing more happy literature.We wouldhave loved it more.
My father who is 82 years and doesn't want to become computer savvy loves the articles appearing on this blog.I supply him with printouts.He lived in Lahore and spent quite some time with Delhi's literary circle as a lecturer in DU way back in 50's .He lovesMohsin Hamid .Can we get a new interview with him??