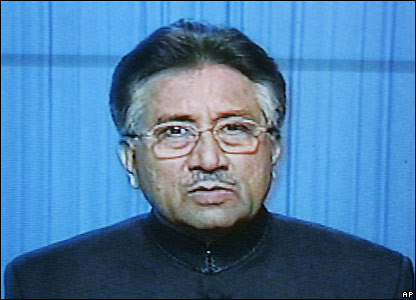 Following is the text of the Proclamation of Emergency declared by General Pervez Musharraf on 3rd November, as released by The Khufiya Press of Pakistan, an army-run news agency.

WHEREAS there is visible ascendancy in the activities of Benazir Bhutto, Supreme Court judges, and news channel correspondents;

WHEREAS some members of the Pakistani society are working at cross purposes with the executive and legislature of the United States of America;

WHEREAS there has been increasing interference by pesky journalists in army affairs, adversely affecting Military Inc.’s economic growth, in particular;

WHEREAS constant interference in executive functions, including but not limited to the control of terrorist activity, has weakened the writ of ISI;

WHEREAS Intelligence Agencies have been thwarted in their activities and prevented from pursuing disobedient politicians;

WHEREAS some kidnapped people were ordered to be released resulting in loss of government’s reputation;

WHEREAS army generals were not allowed to take over the judicial duties after hijacking the executive and legislative functions;

WHEREAS the Government is committed to the independence of the Taliban and the rule of Pentagon and holds BB in low esteem, it is therefore of paramount importance that the Honourable Begum confine the scope of her activity to Bilawal House and not assume charge of streets;

WHEREAS the humiliating treatment meted to me by some newspaper columnists has demoralized Prime Minister Shaukat Aziz and senior government functionaries;

AND WHEREAS the situation has been reviewed in meetings with the Chairman Joint Chiefs of Staff Committee, Chiefs of the Armed Forces, Vice-Chief of Army Staff and Corps Commanders of the US Army;

NOW, THEREFORE, in pursuance of the deliberations and decisions of the said meetings, I General Pervez Musharraf, Chief of the Army Staff, proclaim Emergency throughout Pakistan.

2. I hereby order and proclaim that the Constitution of the Islamic Republic of Pakistan shall remain in abeyance.

3. This Proclamation shall come into force at once.
Posted by Mayank Austen Soofi at 1:20 AM

Whereas there is visible ascendancy,
Leading to our increasing despondency,
Of former PMs and current judges
All of whom hold many deep grudges;
Whereas they are at purposes most cross
Against the needs of our American boss;
Whereas reporters are now far too pesky
For reasons we generals fail to see,
They cause our citizens to hurl curses
At the Army’s ever-fattening purses;
These fools would have us wave bye-bye
To the neighbourliness of the ISI,
Judges release those we kidnapped,
Thus have our wills been sapped;
Looking ahead, we see Hell
If the Army has no functions judicial;
Whereas democracy we would shun
For the sweet rule of the Pentagon,
Or to restore to unruly Afghanistan
The laws and order of the Taliban;
Whereas we hold that only a dirty louse
Whines if BB is sent to Bilawal House,
Thus nary a dissenting voice was heard
Not a judge or journalist stirred,
When I, the unelectable Pervez Musharraf
Told the world that I would act tough,
And if, citizens, you don’t believe me,
Just read this decree of Emergency!

Hope your going well. I am putting together a piece for Triple J radio in Australia about the situation in Pakistan.

Its hard to know exactly what is going on and you being "on the ground" would have a great perspective.

Was wondering if you could do a phone interview today on this - we can do it confidentially if you like.

I sincerely hope you can do this.

Hey Maryam, were you referring to General-saab's brave decision to rip off that hypocritical mask, or to Sir Salman's novel?

While our friends in Pakistan suffer the General but I wonder if he is not there they would suffer whom.BB with her houses (In UK and elsewhere) of Silver would be a better choice!!!!
Unfortunately suffer they may have to but here in India we pray that suffering is short .Also they may enjoy longer phases of Democracy and shorter doses of Army.

Inshah Allah it would happen because i believe there must be world beyond BB and Shrif. Our brothers deserve better.

nobody is suffering only the few lawyers with political ambitions i've spoken to relatives in pakistan and they said life is normal infact it's very quiet.

Hay pakistanis
Tell the general to divide pakistan in many states and keep only defence foreigen affairs with the president. make a cauncill in each state let them choose the cauncil their own administrater.