Satire – What Is to Be Done? 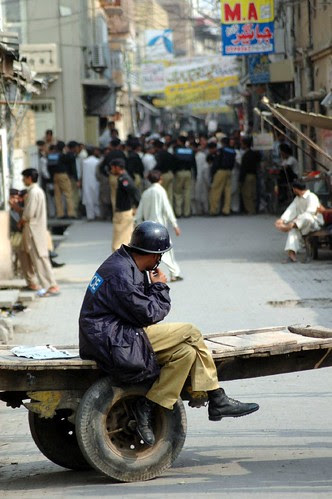 Ms. Bhutto declares she will not have Mr. Musharraf, and Mr. Musharraf has begun to say he will not have Ms. Bhutto. While they continue to make and unmake their minds, Mr. Sharif has again landed in Pakistan. The entire country is in uproar. What is to be done? Pakistan Paindabad sat down to formulate deals that could lift the nation out of its mess.

Ms. Bhutto wants to be Prime Minister. Mr. Sharif wants to be Prime Minister. She is from Sindh. He is from Punjab. Together they can break the country. Together they can unite the country. Time for Pakistan's most popular to make tough choices. Both should divorce their spouses. They should then marry each other, jointly contest the elections, dispose off General Musharraf (oohps…President Musharraf), and rule the country as power couple. Imagine how much money they can make together.

Mr. Musharraf should fly – again - to Jeddah and request the Saudi king to recall his buddy, Nawaz Sharif, back to the oasis. He should then fly to Washington DC and request the US Prez to ask Ms. Bhutto to return to...to London or to Dubai or whatever. He should then fly home to the Army House and order the obedient old banker, Shaukat Aziz, to get back as Prime Minister. Believe us, 98.7 percent happy days will be back again.

Due to its foolish romantic sensibilities, Pakistan Paindabad has always nurtured a soft corner for BB. It never wanted Mr. Sharif, her old nemesis, to return. But the man has returned and the reception at Lahore’s Allama Iqbal airport proved he has in him to spoil the party. BB's party (!) But couldn't Punjab da Munda still be persuaded to leave the booty-ground? Actually, there is a way out. Mr. Musharraf should remain as President. While Ms. Bhutto should give away her sprawling Surrey estate and Swiss bank locker codes to Mr. Sharif. Of course, along with a lifetime supply of Paya-Nihari on the condition that he would be away for 20 years. The scheme will work. Trust us.

He is sexy. She is Jewish. It's a deadly mix. Cricket star (and ex-lover of numerous Bollywood starlets) Imran Khan should stage a coup with the army's assistance. (They say that Pakistan Army is tired of its ex-General). Once in power, he must banish Ms. Bhutto, banish Mr. Sharif, banish Mr. Musharraf. Appoint Respectable Justice Iftikhar Chaudhry as President. And also appoint Equally Respectable Mr. Shoaib Akhtar as Women Welfare Minister. Meanwhile First Lady Jemima could bridge the divide between Israel and the Muslim world. Ah, a wishful thinking.
Posted by Mayank Austen Soofi at 12:29 AM

Call me petulant, but Jemima Goldsmith Khan was never Jewish. Her mother was Anglican, her father a Catholic. She has Jewish ancestry, but she herself did not practice any religion until she converted to Islam to marry Imran Khan.

great post...esp the first option!
i hope mush reads these options..he'd definitely like the second option ;)