Commentary - The Three Musketeers of Pakistan 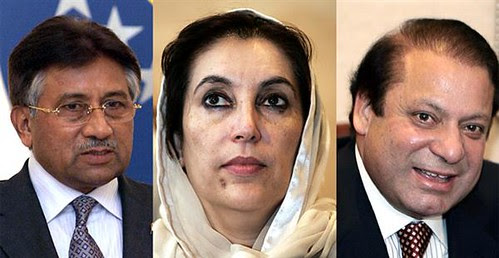 A not-for-dummies guide to the trinity of Benazir + Nawaz + Musharraf.

In October, 2007, Benazir Bhutto returned to Pakistan, after nearly eight years in self-imposed exile, to a rapturous welcome, and a stark threat of violence. Within days, however, emboldened by her reception, the largely salutary attention from the media – both national and international, and her pragmatic assessment of Musharraf’s rather limited options, Bhutto schemed to press home her perceived advantage in the power-sharing deal with Musharraf.

Musharraf, ever the wily General, pre-empted Supreme Court’s actions with a declaration of emergency on November 3rd, days before the Court was to hand its verdict. The emergency, which appears to have been declared at least with the knowledge of US if not with its backing, drew swift condemnation from around the world.

Emergency declaration spawned the by now familiar scenes of protesting lawyers, undoubtedly with some PPP support, against the ‘illegality’ of Musharraf’s declaration. Musharraf and Bhutto, still hedging their bets, appeared to avoid a confrontation till November 9th when Bhutto declared her intention to lead a motorcade from Lahore to Islamabad on the 13th. Musharraf reciprocated by giving the orders to put Bhutto under house arrest.

The chorus of condemnation, and the Western penchant for espousing formulaic naïve idealism, put enormous pressure on America’s support for Musharraf. From America’s perspective, it appeared that supporting Musharraf and the status quo wasn’t particularly in their interest, given the choice of dealing with equally amenable democratically elected representatives. America, it appears, let Musharraf know as much, and then worked with Saudi Arabia to bring Nawaz Sharif – whom Musharraf had removed in a coup in 1999 – back to Pakistan.

With the arrival of Nawaz Sharif, who still appears petulant - in spite of his hair transplant- with his threats to boycott elections in January, even though the first thing he did after coming to Pakistan was file his nomination papers, the electoral equation has changed.

There is now a strong possibility that Sharif's party, untainted by General’s touch, would perform strongly in the polls. The return of Sharif and the possibility of his electoral success marks the denouement of a political drama thick with intrigue, lack of trust, and greed.

Last time Sharif fought elections in 1997, his party managed to garner enough seats in the parliament to change the constitution, which it used first to strip president of his discretionary power to dismiss the government (Article 58 (2b)), and then to enact a law to allow party leaders to expel anybody from legislature who violated “party discipline”. The second measure was rejected by the Supreme Court as unconstitutional. Accusations of ‘judicial activism’ were leveled against the court and Sharif set to bring the court under his control.

After a protracted battle with Chief Justice Sajjad Ali Shah during which Sharif threatened to curtail the size of court to 12 from 17, Sharif forced the resignation of Shah by ably recruiting the other justices on the court against Shah.

Between 1997 and 1999, Sharif assiduously worked to concentrate power. By early 1999, he felt sufficiently emboldened to suppress media. Between December 1998 and January 1999, his government sent notices to Jang newspapers to remove 16 journalists considered hostile to the government. When Jang refused, they launched cases charging tax fraud, among other things. “In May, two senior journalists, Najam Sethi and Hussain Haqqani, were arrested and a few others were harassed by the intelligence agencies. Sethi was accused of treason on the grounds that he delivered an anti-Pakistan speech in New Delhi.” (Hasan-Askari Rizvi, 1999)

Consumed by hubris, Sharif, whose relationship with the army soured notably after the army failed to deliver on Kargil, set to tackle the Army. On October 12th while Musharraf was on an official tour to Sri Lanka, Sharif dismissed Musharraf and replaced him with a low level crony from Pakistan’s intelligence services. While Musharraf was on the plane, the army responded by banding behind Musharraf and executing a coup against Sharif’s government. By the end of the day, Musharraf had taken the position of ‘Chief Executive’ since the position of President was already taken and thrown Sharif into jail.

Benazir Bhutto embodies the conflicts that cleave at the heart of Pakistani politics. She is a Radcliffe (Harvard’s college for women) and “oggsford” (the college Gatsby went to) alumna and a “deeply dedicated Muslim” , a Shia by birth and a Sunni(?) by marriage, daughter of the last ’statesman’ – a reputation Zulfikar, (the name of the double-edged sword Husayn used in Karbala, and a name that aptly captures his two sided personality of a feudal minded socialist), sealed with Shimla accord– and wife of Mr. 10%, the first democratically elected female leader in the Muslim world and the leader of one of the most notoriously corrupt regimes to lead Pakistan.

Bhutto’s political career rests upon the mythology of her father and the Bhutto name, and she has done little to let PPP grow beyond a personality cult, much like the nepotistic practices of the Nehru-Gandhi family in India.

Bhutto, over her career, has not only shown calculating pragmatism – like her marriage to an undistinguished “successful businessman” at 34 in preparation of elections in 1988, or courting the West by playing to its stereotypes, and decisions reflecting deep sense of entitlement and nepotist feudal tendencies like her appointment of mother, Nusrat, as a senior minister without portfolio, followed by appointment of her father-in-law as chairman of the parliamentary public accounts committee, she has also shown a penchant for making brash decisions that come easy to a woman born in luxury, excessively feted by the West, and who was elected a Prime Minister at the age of 35.

Her decision to press her advantage – when she saw a beleaguered Musharraf at the center of an international outcry – was one such misstep – and a misstep that is likely to cost here politically.

When Sharif was sent to exile in Saudi Arabia in 2000, the heads of Pakistan’s three major parties –the other two being Bhutto (PPP) and Altaf (MQM) - were to all in exile. Despite the forced absence of leaders from parties which rely a fair bit on their leaders, Musharraf still couldn’t cobble together a new political structure – as was his stated intent.

Perhaps it was because these leaders were able to rule so effectively from their respective exiles. But the more likely reason is that new political structures aren’t built in elites – they are built by years of demagoguery and pandering. In reality, Musharraf shouldn’t have tried to cloak his authoritarian regime with democracy. By playing a benevolent autocratic democrat, Musharraf clearly took on too much. He replaced politics with something far more inert and calculated, and his self-righteous defense of the charade combined with his increasingly manifest status as a vassal to US, drew people away.

The present and the future

Musharraf imprudently relied too much on continued support from US, while Bhutto overplayed her hand by pushing too far with her rent-a-day rioters. It is very likely that the true beneficiary of the current fiasco would be PML, which will expectedly fight the election in alliance with Islamic parties, if elections are allowed to be held fairly – a relatively improbable scenario.

Bhutto, Sharif, and Musharraf do not trust each other. A game of political brinkmanship, as evidenced by banning of Sharif and his brother Shahbaz by the Musharraf controlled Election Commission and the meeting between Sharif and Bhutto, is now unfolding as each tries to form alliances or thwart the other.

It is useful to note that forming alliance with one on a particular issue doesn’t preclude forming an alliance with another. This game will continue till election results come in and throw the power equation in sharp relief. Election results will bring also bring accusations of unfairness. It is going to be a turbulent few months for Pakistan.
Posted by Mayank Austen Soofi at 7:38 AM

hi I am 23 age BOY from Karachi ,not a gay in actual .
but looking for a mature man of 45+ age to fuck me for one time only ..i am bottom
contact me on my email
Cenagul@yahoo.com