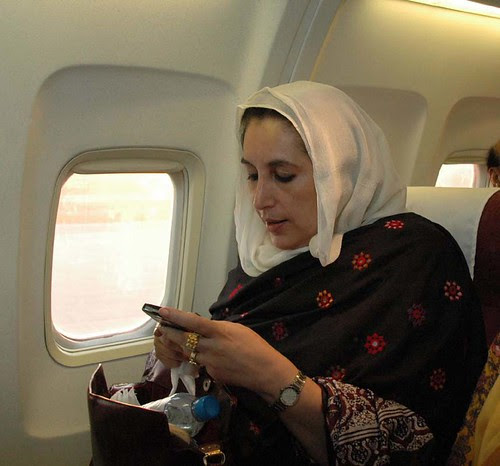 The grief is still green and it is comforting to sink into the cushions of sadness. But let's make the mourning more intense. Switch on the record player, take out the Yash Chopra LP, and play Kabhie Kabhie Mere Dil Mein Khayal Aata Hai, Benazir's favorite song (else simply watch a Begum Nawazish Ali video).

But why be so sad? Stuff happens. Leaders die. Followers fight. Nations live on. And Benazir was no Jinnah. Dissenting voices have quieted in respect for the dead, but chambers would re-echo with accusations. Uncomfortable questions would be asked. Why the late Mohtarma Prime Minister had to appoint her businessman husband as Investment Minister? How many Swiss bank accounts she held? And what about the mansions in western Europe? And so on. True, nothing has been proved against her. But the taint would remain unless proved otherwise. So why feel sorry for her? Wasn't she just another politician?

Remember, at least 20 more people died in the assassination. Why grief only for the Lady VIP?

Benazir Bhutto was privileged. Born rich and got richer. A feudal lord's daughter who married a feudal lord. Her playgrounds - Karachi, Dubai and London. Her stopovers - New Delhi and Washington DC. Her pilgrimages – sufi shrines of Ghareeb Nawaz and Lal Shahbaz Qalandar. Tchhh, the lady could not live long but she did live a fantastic life. Do you agree? Why is then our heart broken?

Why be so grieved?

Is it because Benazir was a woman, a beautiful woman? Because she was like one of us? Because her nickname was Pinkey and she drank gin and drove a Porsche when at Oxford. Because she read Mills & Boon romances? Did we feel for her because she deserved a better husband? Why, oh why, are we in such despair? Is it that we are overwhelmed by the circumstances of her death? Are we saddened because her children might meet the same fate?

Are we weeping for Pakistan also?

But that's useless. These are bad times but they, too, shall pass. Pakistan Paindabad!
Posted by Mayank Austen Soofi at 8:45 PM

We feel saddened much more for a nation where human life has lost value. Where even a "VVIP" could not be protected. The 100s who die in mindless slaughter who are just another brother, mother, father, son or daughter.
Why screams our mind!! Have we seen anything so gory?

The "VVIP" could have lived in the European bunglaws with the money in the "Swiss Bank" than to fight for democracy for a third world country. Yet she died for it?

We feel pain b'cos our hearts know that the killing was injust and mindless of human consideration and we are helpless to do anything about it.

We salute a brave woman. An ideal for a woman in a deprived society.

Yes, the media did a good job of revising history regarding Benazir and the Bhutto dynasty. On Friday, Decemer 28, Amy Goodman had an excellent program on Democracy Now about Benazir Bhutto, her family, Pakistani politics, and US influence. And, all is not as it seems. Analysis provided by guests Tariq Ali and Manan Ahmed. Excellent! Check out the transcript from the show.

Thats true that we still grieve at the death of a great leader,an ideal and an example for all!she was a pakistani and that makes me happy and proud to be a pakistani!