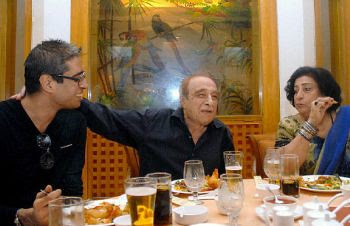 [Text by Mayank Austen Soofi; picture of the Gulgee family by Rajiv Bhatt]

Pakistan Paindabad regrets to note the death of eminent artist Ismail Gulgee, his wife Zarin, and their housekeeper Aasia. On December 19, 2007, they were found murdered by unidentified people in their Clifton residence in Karachi.

Mr. Gulgee was a US-returned engineer who abandoned that career to focus on his art. He later said that he wanted an engineering degree to fall back on in case of need. As it turned out, the need never arose. Mr. Gulgee began well as a portrait painter. During the 50s, he was commissioned to paint the portraits of the entire Afghan Royal family. But it was in abstract expressionism that he found his true calling. Inspired by Islamic calligraphy, some of his work can be seen hanging in Islamabad’s Faisal mosque. It is not certain if it's a compliment but Mr. Gulgee happened to be Pervez Musharraf's favrouite artist.

Talking to this blogsite, renowned columnist Irfan Husain said, "Ismail Gulgee was an iconic figure in the Pakistani art world. Although some critics made light of his portraits of the powerful, his technique was flawless, whether he worked in lapis lazuli, or in extravagant brush strokes. His works adorn many public spaces in Pakistan, and the country will be the poorer for his passing. The manner of his death was shocking, as Gulgee was a highly cultured and gentle human being."

Not many are aware that Mr. Gulgee was also attentive towards the culinary art. He considered murgi ka achar his signature dish. However, he was not as skilled with ladles as he was with brushes. Once when Begum of Bahawalpur came to buy his work, he tried to make coffee for her but could not produce the foam. It turned out he was whipping a percolated coffee.

Early in 2007, this blogsite interviewed Mr. Gulgee’s son, Amin, a renowned sculptor. We had also talked about his parents:

Your father Ismail Gulgee is a well-known artist.

My father is from Peshawar. He is a most incredible colourist I’ve ever seen. He is like a child when he works. He taught in Aligarh, India, before the partition. My mother was born in Bombay. That's her home town. She went to Elphinstone College there. She remains in love with that city. Bombay will always be her city. But my destiny starts in Dhaka where my parents first met. They fell in love and soon got married. Now we live in Karachi. My father is 81.

My mother? Uhmmm well, she will hate me to disclose her age. Let’s say she is younger than me.

So you live with parents?

No. I can't live with anyone. Not even with my parents. They too can't live with me (laughs). But they live next door. Few years ago we shifted to Islamabad following disturbances in Karachi. But we could stay only for a month. My mother is a big city girl and Islamabad is just not the place.

Which Pakistani artist has inspired you most?

My father, of course. Then there is Sadeqain. He is dead now. Allah Baksh, Shakir Ali, and Ahmed Pervez have also been influential.

The tragedy in the Gulgee family is a deep loss to Pakistan’s art world.
Posted by Mayank Austen Soofi at 7:40 PM

Thank you for this, Mayank - very thoughtful. our hearts are broken.

This is tragic, and shameful. I can not understand why our talent has to be destroyed like this. We are a nation who does not need enemies, because we are very much capable of destroying our country, its culture, and talent.

This is shameful!
Oh Lord please forgive them, they do not know what they are doing.

This is very disheartening to learn of Ismail Guljee's death. I had the opportunity of meeting with the great art icon, and his personality mingled with art radiated immaculately. It is a deep loss for all, more for Pakistan's art culture. Guljee was an absolute colorist, and a wonderful conversationist.

My condelence to Amin Guljee for the loss of his parents.

Your obituary was relayed beautifully.

We have lost A great Ambassador of the nation
He was the Icon for Pakistan
I condole Mr.Ameen Gulgee you have lost your father
And the nation and community lost a great god gifted artist.

A great loss to Art,nation and humanity. He was such a talent who born in centuries. my deep sorrow and gratitude for Amyn gulgee.