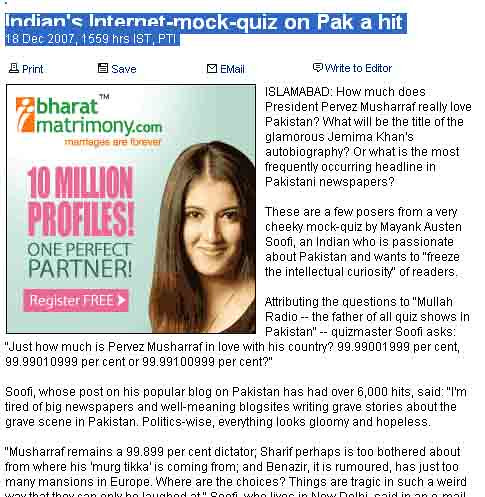 How much does President Pervez Musharraf really love Pakistan? What will be the title of the glamorous Jemima Khan's autobiography? Or what is the most frequently occurring headline in Pakistani newspapers?

These are a few posers from a very cheeky mock-quiz by Mayank Austen Soofi, an Indian who is passionate about Pakistan and wants to "freeze the intellectual curiosity" of readers.

Soofi, whose post on his popular blog on Pakistan has had over 6,000 hits, said: "I'm tired of big newspapers and well-meaning blogsites writing grave stories about the grave scene in Pakistan. Politics-wise, everything looks gloomy and hopeless.

"Musharraf remains a 99.899 per cent dictator; Sharif perhaps is too bothered about from where his 'murg tikka' is coming from; and Benazir, it is rumoured, has just too many mansions in Europe. Where are the choices? Things are tragic in such a weird way that they can only be laughed at," Soofi, who lives in New Delhi, said in an e-mail interview.

The next question on "Satire - Special Quiz on Pakistan", which covers almost all aspects of the country, is: "Which is Benazir Bhutto's favourite bedtime reading book? "Swiss Bank Accounts and Investment Management", "Daughter of the Yeast" or "Easy-to-Use English-Urdu Speaking Dictionary?"

Jemima Khan, the glamorous former wife of cricketer-turned-politician Imran Khan, who has been in the news lately for spearheading the "Free Pakistan Movement" in Britain, also figures in the hilarious quiz.

"What is the title of Jemima Khan Goldsmith's autobiography she will never write? "My Life in Benetton Burqas", "Khan I Grant" or "My Feudal Bowler?"

"The biggest challenge for bloggers like me remains how to present the stale news in a way that fascinates readers. That is why I thought of this fun format. It's a quiz with ironic choices that reveals the pessimistic scene without making you pessimistic," he wrote.

Former premier Nawaz Sharif, who is back on the political scene after eight years, also finds a mention in the Mullah Radio quiz.

"What is the election symbol of Nawaz Sharif's political party, PML-N? Chappali Kebab , Paya-Nihari or Butter Naan ?" -- goes the question on Sharif, who loves food.

Last, but not the least, there is a poser on the militancy-hit North West Frontier Province. "Which of these are the most prized possessions of NWFP noblemen? Poppy flowers or Kalashnikovs ?" reads the question.
Posted by Mayank Austen Soofi at 10:46 PM