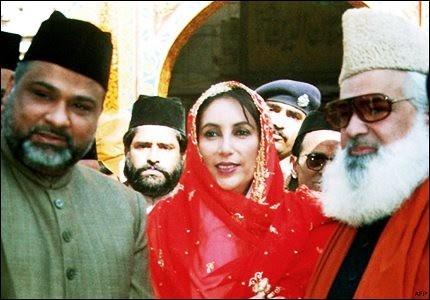 Benazir Bhutto displayed the sufi trait in her death.

[By Raza Rumi of Jahane Rumi and Pak Tea House; the picture was taken during Ms. Bhutto's trip to Ajmer Sharif dargah in 2001.]

It was in the dargah compound of Ajmer when our phones started buzzing with friends and relatives wanting to share grief on the loss of a woman who was both loved and hated but never ignored. This was the typical winter dusk and we were returning from a soulful traditional dua-i-roshnayee (pre-sunset prayer) where candles are lit in remembrance of the much revered Khawaja. Amidst frantic phone calls from grieving friends, the shock was cushioned in the mystical atmosphere as one reaffirmed that God's will was above everything. But the aching sense of loss for Pakistan haunted us despite the calming effect of Ajmer.

It was this strong faith in God and in her mission that brought Benazir Bhutto back to Pakistan after an exile of nearly a decade. She returned despite the knowledge that she was on borrowed time; and there were heinous elements who wanted to physically eliminate her. Benazir was a lover of the mystics and had visited Ajmer thrice as we found out from the deeply-shocked residents of this small medieval town. Coming from Sindh, the land of the Sufis and poets, Bhutto was a devotee of Khawaja Ghareeb Nawaz. Like a true Bhutto she was not afraid of death as the believers consider it to be ordained by God in the first place. But the truth is that she is no more; and this is hard to reconcile with.

One cannot miss the symbolism of the location where Bhutto was killed. The place, Liaquat Bagh, is named after Pakistan's first prime minister who was also shot here. The reasons for his death are still not known other than the simple imperative that in Pakistan, legitimate politicians need to be eliminated. This tragic place in Rawalpindi is also not far from the place where Benazir's father was hanged in 1979; and whose legacy refuses to go away.

At least in Benazir's case, the battle lines were clearer. A patently violent brand of political Islam masking itself as anti-imperial and aided by powerful elements within the Pakistani establishment is hell-bent on destroying Pakistan's political and social fabric. Contrary to what many believe, this embedded dysfunction is above all a threat to Pakistan and its burgeoning population. The region and the world come next. In India, the comparisons between Rajiv and Benazir have been unavoidable as the two countries have suffered from the endemic violence, dynastic politics and a symbiotic relationship defined by cyclical political turbulence.

Today's subcontinent has all but forgotten the tolerant and inclusive Islam that was practised by the Sufis and which in large measure shapes the belief system of a vast of majority of Muslims and non-Muslims alike. This is what the militancy and its official backers are now set out to achieve but they forget that centuries of tradition of peace and inclusion can be dented but cannot be reversed.

Bhutto's mass appeal remained a formidable challenge to the Pakistani establishment that failed to undo the legacy of people-centred politics for three decades. The Bhutto brand of politics came about without the manipulations of the bureaucratic steel-frame that shaped Pakistani politics, often in tandem with foreign interests. Benazir's return in October showed that her popular support was intact despite the corruption charges, trials -- real and media-led – and continued impression of incompetence and opportunism in a culture of misogyny and violence against women. Her worst opponents could not deny her dazzling articulation and grasp of global politics. And, now like her father she also demonstrated an uncanny sense of history, of seizing the moment and dying for the cause of political process in the militarized Pakistan.

This fearlessness of death is a Sufi trait as death is just another phase in our journeys and struggles. The inclusive and multicultural legacy of the Sufis is endangered by the rise of militant Islam and politics of elimination. Benazir Bhutto had drawn on this legacy and in her death we are reminded of the urgency to revisit and build on that legacy.

[This article was originally published in the op-ed page of the Pakistani daily The News]
Posted by Mayank Austen Soofi at 9:30 PM

we south asians happen to be murdaparast people. no one had really good words to say about bhutto when she was alive. now she has become the angel we never knew existed. but rumi make some thought provoking points how religious extremism has distorted the harmony of both india and pakistan. like him we can only hope that this regression is not irreversiable.

Mayank:
many thanks for posting this article. I was pleasantly surprised to see this.

Zafar: Maybe you are right about murdaparast tendencies but let's face it that a motivated media was always putting her on trial and a good number of people (which are in millions by the way) never bought the propaganda.
This is why her support base was firmly intact and this is why she was a threat to the forces that do not want a secular, democratic leadership in Pakistan
cheers
RR

Nice piece but I'm troubled. Benazir Bhutto visited Ajmer shrine. Musharraf wanted to but could not make it. He lives. She is dead. raza Rumi, please explain it.

@Smriti Dixit.
No one claims that eternal life is granted at this shrine, which belongs to a man whose character, values and practices had brought the multi-religious, heterogenous Indians under the banner of tolerence.

Being brought-up in a sufistic setting of Hazrat Shergarh (in West Punjab), I can perfectly make sense of what Raza is trying to say.

Life & death, liberal & conservative politics aside, Benazir Bhutto definitely showed inclination towards Sufi teachings more than the hardliner version of religion. This made her a liberal and open to ideas politician. I remember the big 'Ya Ali'(ancient sufistic chant) imam zamin on her right arm the day she arrived in Pakistan, which clearly showed her beliefs were in lieu to Sufi's.