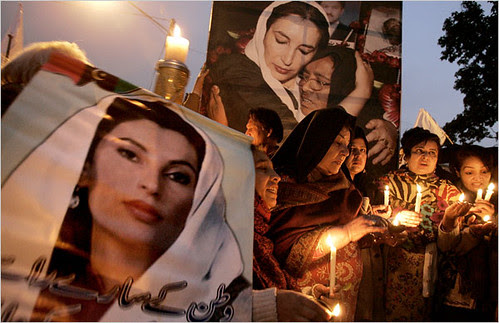 To mark the end of the 40-day mourning period of Ms. Benazir Bhutto’s death, Pakistan Paindabad leaves the readers with this poem originally published in the blogsite Pak Tea House. The English translation follows the original.

[This poem was composed by Mr. Raza Rumi on January 9, 2008, in Rawalpindi's Liaqat Baagh, the site of Ms. Bhutto's assasination; picture by Emilio Morenatti]

People of this Murderous City
[Translated by Mr. Raza Rumi]

In this island of grief
Where all journeys stand directionless
Fragrant Roses adorn your image
And, We, your murderers, impotent accomplices,
Cast guilty shadows across this barren land

O, the gifted leader, that inimitable image
You had given a new meaning to resplendence
Dragging your worn feet
and covering your bare head
You had borne invective upon invective
And the half-dead people of this city
gaped at your strength

This was the murder of all my visions
And all my dreams cracked
as you entered hades*,
beneath the weight of roses

Though a grave shall unfold its fragrance
We the ashamed,
fighting our tears
holding the placards of our dreams
Will analyse, compose elegies

And today,
locked in the mist of wistfulness
gripping their torn shirts
they search for their forsaken hearts

* the underworld kingdom in Greek mythology inhabited by the souls of the dead.
** Yazeed (645 - 683), the second Umayyad ruler who established monarchy and killed Husain and his family members, the grandson of Prophet Mohammad who had challenged the principle of rule without the consent of the ruled.
*** The location of the legendary battle of Karbala.
Posted by Mayank Austen Soofi at 10:39 PM

Raza has composed the poem fiercely-beautifully. Perfumed the air with immense emotions!

It is beautiful. Benazir was a much loved leader of our country. We in Pakistan don't know what is to happen after her. She was the best of all the politicians. By the way I also went to that park in Rawalpindi where she was assasinated. I have my best wishes for her children.

OK, before you read the following, you really must the above poem on Mayank's blog 'Pakistan Paindabad'. (A blog that should really be renamed 'Why wasn't I born a Paki? Why, Allah, why?!' But I digress...)

Can you hear the laughter
About those who mourn HER?
Corrupt from tress to toe
Our martyr, blessed Benazir Bhutto!

Where, Asif, are the billions she stole?
Gone underground, into a hole!
The honest, yet poor, must pray
That in the flames of Hades she shall stay.

The PPP now sings of abettors;
They recall not Murtaza and others
Whose blood flowed for all to see
In the filthy gutters of Karachi.

In that last speech of hers
She hesitated not to curse
Nor passions to stir
Against my nation, her neighbour...

Why then should Indians mourn,
Or with roses adorn,
Some gimcrack portrait
Of a character truly third-rate?

Do you really feel any grief
For a brother's murderer, a nation's thief,
Or are you simply following the fashion
Of hypocrites, whom 'tis best to shun?

And tho' it sounds a little mean,
Yon poem reeks of saccharine!
I speak truly, not meaning to tease
In saying it'll exacerbate diabetes!

I shall now pause for the candle-wavers of Wagah to explode... :-)

Your parody of my heartfelt poem is excellent. Truly appreciated despite the fact that is churns out every cliche weaved by the media and right wing sexist narratives on Pakistani politics. Never mind.

In fact the Pakistani establishment which has made the half truths on her 'real' wouldlove your poem too- obviously for different reasons than mine.

In her last speech she made no attack on India and if anything she suffered for years beacuse of her Indo-Pak vision - she was called a traitor to disengage from the Punjab insurgency and a 'ghadaar' to talk of a commen currency and open borders between the two countries.

And how can you call her a 'brother's murderer" - they tried for 11 years to involve her in the murder conspiracy but that was never proved. In fact a high level judicial inquiry - notin her term - exonerated her government of these charges.

Perhaps you should visit Pakistan and talk to the millions who supported and still support her party and you might get a better understanding of this complex phenomena known as the Bhutto magic.

And, this is why Pakistan Paindabad is a great blog as it purports to engage in a dialogue and not harp on the corporate media's cliche on India and Pakistan - this is the only way we will overcome the unfortunate baggage of recent history.

You are of course entitled to your views about Mayank's blog but just a little request: do not call a Pakistani as "Paki" as it is now a racist-abusive term and invented by our former colonial masters -

Finally, all my points of disgareement are about the life and times of Bhutto and not about your evidently impressive poetic ability

No wonder you can mix fiction so well with the facts..

First of all, it is an excellent poem and I must congratulate Raza for that. I have known him as a blogger and writer and, here, today, I have discovered another aspect of his personality i.e. as a good poet. :)

However, I am somewhat averse to the tendency amongst us i.e. the people of the sub-continent to eulogise our politicians to the extent of raising their status to that of demi-Gods. I think that we should remember that they are/were also human and, therefore, prone to human failings, even as they do/did a lot of things that are/were remarkable.

An analysis of Benazir's legacy by noted historian William Dalrymple, published in the Time magazine, is available at http://www.time.com/time/magazine/article/0,9171,1699877,00.html .

To keep the poetic pot boiling:

I concede that I may
Be lacking in tact,
Yet you really can't say
That I garbled fiction 'n' fact!

Listen once again
To La Mohtarma's last speech,
And admit, despite the pain
For anti-Indian votes she did reach.

She coded it in terms of Papa Bhutto,
His plans to make arms nuclear
For use against India, wasn't it so?
That, to us, can scarcely endear...

Moving from the father to the son,
Wasn't the PM then Lady BB
As Murtaza & Co. were mowed one by one,
In a darkened street of Karachi?

Yes, I remember there was a tribunal;
But do you recall what it said?
It mentioned killings "extra-judicial",
And faulted the government's head...

Peruse once more that judgment
Of "approval from the highest quarters"
That led to a family's bereavement,
His friends too, those forgotten others.

You preferred, cautiously, to shun
Over the charges that were laid
Of Mr. & Mrs. Zardari's corruption,
And the millions they were paid.

But though it cause you much distress,
There remains that mansion in Surrey,
In Swiss vaults a blue diamond necklace,
"Fruits of corruption" for all to see.

That quote, by the way, isn't mine
But from Lord Justice Collins
No halos around Benazir did shine,
Who shall account for her venal sins?

It is pat, if childish, to dismiss
All charges as corporate cliches,
But harder by far to miss
Flaws as long as her days.

Siddhusaheb brought up William Dalrymple
And his eulogy for Benazir in 'Time'
Call him yet another journalistic pimple
But sins are sins, in prose or rhyme! :-)

Dear Mr. Shenoy, if Dalrymple's article you had read
"A eulogy it is not!", you would've said

Dalrymple made a lot of sense,
Though Benazirites he may incense;
I mulled over using 'obituary'
But preferred the sarcastic 'eulogy'
Claiming the freedom of poetic license!