Pakistan Elections – The Morning After 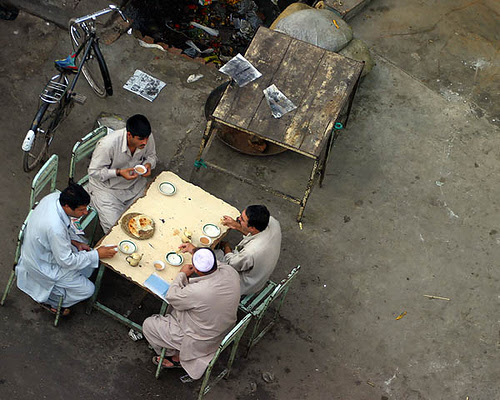 Life goes on after the landmark mandate.

[By Mayank Austen Soofi; picture of the Peshawar chaikhana by Roving Light]

All those who don’t want Pakistan to thrive must be in mass depression. General elections have taken place. Not much rigging was reported. Not many died. And results were comforting.

Mr. Musharraf’s pets suffered a humiliating defeat. Mr. Nawaz Sharief’s party performed impressively in Punjab, his home state. The late Ms. Benazir Bhutto’s PPP did well in all provinces, proving that she was loved by many, and despised by some, throughout Pakistan. These happy moments are well deserved by a nation that has seen too much grief for too long.

For election news and analysis, Pakistan Paindabad urges you to take recourse to newspaper websites and opinionated blogs. However, if you feel there is life beyond the news of the moment, stay on. Here are snippets of Pakistani life compiled from newspapers immediately following the election razzmatazz.

LAHORE: Three youngsters committed suicide in separate incidents in the city, after their parents refused to let them marry the girls of their choice. Two of them took their lives by swallowing poisonous pills, while the third one shot himself dead.

The labour force survey data of the government shows that unemployment rates rose sharply from 6.1 per cent in 1999 to 8.3 per cent in 2004. Therefore the nature and composition of GDP growth during this period could not be expected to have substantially reduced poverty.

KARACHI, Feb 19: The Karachi University Botanical Garden (KUBG) is set to open to the public once a week in the first week of March. Inaugurated last year, the garden is the first of its kind in Pakistan, representing over 2,000 exotic and indigenous plant species.

LAHORE: With visas issued to hundreds of election observers and journalists, it was hard for ordinary Pakistanis to vote without tripping over a foreigner.

MIRPURKHAS, Feb 19: The decision of the Mirpurkhas district government not to renew contract of at least 19 doctors has generated a crisis -like situation for the administration of Mirpurkahs Civil Hospital.

KOHAT, Feb 19: Security forces killed a militant and arrested two others after an attack on a military convoy in the Shee Kallay area of Darra Adamkhel near the Kohat tunnel on Tuesday, officials said.
Posted by Mayank Austen Soofi at 9:42 PM

we were given the perfect choice...the pets of musharaf or either of the two most corrupt ppl still alive in pakistan!